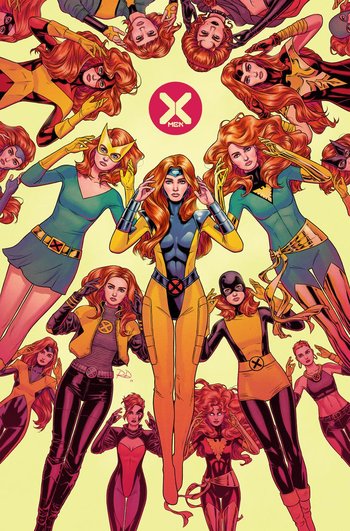 "Everybody thinks the Phoenix Force is turning me into some kind of cosmic destroyer, but it's not like that. I have trouble with the rushes, but I'm okay, really. I think I can make things right here." Art by Russell Dauterman.

I don't want you to get hurt, but you have to understand... The more you annoy me the more I can't help thinking about deconstructing you, molecule by molecule, memory by memory... until there's nothing left but screaming, traumatized atoms.
— Jean Grey, New X-Men #120

Jean Grey, also known with the aliases Marvel Girl, Phoenix, Dark Phoenix, and the White Phoenix of the Crown, is a Marvel Comics character and one of five original members of the X-Men in Marvel Universe. As such, she is first introduced in the very first X-Men comics, that is Uncanny X-Men Vol. 1 #1 in 1963. She's created by Stan Lee and Jack Kirby.

Her power set is simple: telekinesis and telepathy. Her look is simple, but dynamic—her hair is red and voluminous, her suit is emerald. She has a place as Professor X's particular protegee, and (prior to the appearance of her time-travelling/reality jumping children) the only telepath whose potential surpasses his. And when that potential is tapped, you have one of the most powerful X-Men of all.

She was the center of attention throughout many of the X-Men's early adventures, being the only woman on the team at the time, and also one of the most potentially powerful. Eventually she settled into a relationship with Scott Summers, a.k.a. Cyclops; however, her burgeoning psychic potential along with some brain-washing caused her to develop an incredibly malevolent Split Personality with the power to destroy planets. She made a Heroic Sacrifice during a moment of being in control of herself so that she wouldn't cause any more destruction at the climax of The Dark Phoenix Saga. However, the Phoenix Force disperses into its original form and a fragment locates the still-healing Jean at the bottom of Jamaica Bay. But Jean senses its memories of death and destruction as Dark Phoenix and rejects it, causing it to bond with her still-lifeless clone, Madelyne Pryor, instead. The phoenix cocoon, containing Jean’s psyche, is discovered and retrieved by The Avengers and Fantastic Four. Jean emerges with no memory of the actions of the Phoenix or Dark Phoenix. She is reunited with the original X-Men, and convinces them to form the new superhero team X-Factor.

She also initially accepted that Scott has moved on, married to another woman named Madelyne Pryor. However, things got complicated when Madelyne returns during Inferno (1988)— her powers are awakened by demonic pact and she introduces herself as Goblyn Queen. The revelation that Madelyne is actually Jean's clone drove her completely insane and she plans to sacrifice the infant Nathan to achieve greater power and unleash Hell on Earth. Jean and Madelyne confront each other, and Madelyne attempts to kill them both. Jean manages to survive only by absorbing the remnant of the Phoenix Force housed within Madelyne, giving her both Madelyne's memories and the Phoenix's memories from the Dark Phoenix Saga.

Jean eventually accepts Rachel as her daughter, who also requests Jean to take the codename Phoenix. After some time, she also accepts Scott's marriage proposal (which she previously rejected) and during their honeymoon, they had Mental Time Travel to the distant future, which allowed them to raise young Nathan. During this time, Scott and Jean used fake names, Slym and Redd Dayspring, respectively, to hide their identity. It's revealed that Rachel was responsible for the time travel by using her powers because she wants them to protect and raise Nathan. Back in the present, Jean and Scott revealed to Cable that they had raised him in the future as Redd and Slym Dayspring. Cable had known for some time and was waiting for them to be ready to tell him. They were pleased to be reunited as a family again. During Onslaught, Jean also met her other alternate reality child, Nate Grey a.k.a. X-Man (and is essentially younger Cable), who accidentally resurrects Madelyne in a subconscious attempt to reach out to his "mother", Jean. Despite being responsible for bringing her rival back into her life, Jean parted with her son on good terms.

Scott is later possessed by Apocalypse while trying to protect Nate and apparently killed. But Jean believes he may be still alive. She's helped by Cable in rescuing and freeing Scott from the possession. But, during the events in New X-Men, Scott isn't feeling very well due to Apocalypse's possession and this is when their marriage begin to fall apart, especially after the "psychic affair" between him and Emma Frost, fellow member and reformed supervillainess. Ultimately, though, Jean realizes that Emma truly loves him. And when Emma was shot and literally shattered in her organic diamond form by Esme Cuckoo, Jean helped repairing Emma at the molecular level, displaying incredible telekinetic power. Later, she's tricked by Magneto impostor, Kuan-Yin Xorn, along with Wolverine, who has long-time one-sided crush on her. They ended up trapped on Asteroid M, drifting closer to the Sun. The Phoenix Force within Jean is reawakened when Wolverine tried to Mercy Kill her. Jean and Wolverine returned to Earth to face Xorn. But Xorn managed to (physically) kill her with an electromagnetic pulse which causes her to have a planetary-scale stroke. An enraged Wolverine soon avenges her by decapitating Xorn.

Upon the death of her physical form, Jean spends time in the The White Hot Room doing 'Phoenix work'. The Phoenix Force can also restore Jean's body to life, although there appears to be some unknown limitation to how quickly it can successfully accomplish this following her death. Around this time, she's also somehow seen aiding the X-Men, such as collecting the missing fragments of the Phoenix Force; she took some of them from Rachel Summers and the Stepford Cuckoos after the events in Phoenix Warsong when they wield the powers. She even helps Emma (again), when the latter is mind raped by the resurrected Madelyne Pryor into psychic static. She also helps Scott, who became Dark Phoenix of Phoenix Five, to let go of the Phoenix Force during Avengers vs. X-Men.

After a period of haunting her younger self, she was brought back to life once again (and told the Phoenix very politely, but very firmly, to leave her alone), and led her own team of X-Men. After confronting her son, Nate Grey, after he'd apparently pulled a complete Face–Heel Turn and come to see himself as a god (the truth was a little more complicated) in Uncanny X-Men (2018), she tried to talk him down and he revealed that he was dying and desperately trying to do something good before he died (like save the world, whether it wanted it or not).

After that, like all the other X-Men she was pulled into his new reality - the Age of X-Man. After identifying the inconsistencies and confronting him, Nate accepted his mistakes and released her and the other X-Men (some of whom felt he had a point), she became a key part of the X-Men's new status quo - a member of Krakoa's Quiet Council.

Jean Grey has appearaed in: