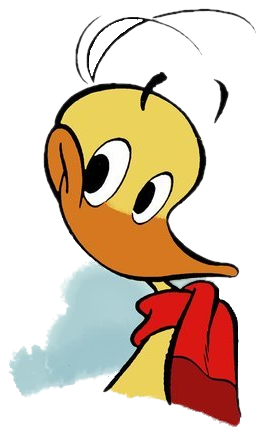 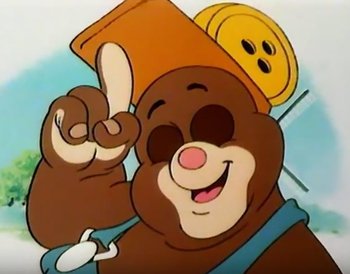 A mole who's close friends with Alfred's parents, and adopts him when the rest of the Kwak family dies.
Dolf 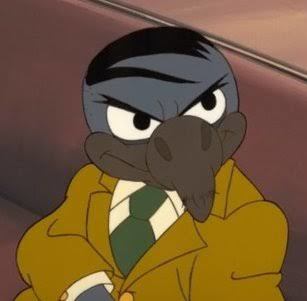 Adult Dolf sporting a toothbrush mustache.
A crow who goes to school with Alfred and is shown becoming one of the series' biggest villains. 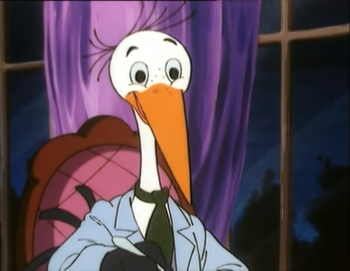 Adult Ollie wearing a suit.
One of Alfred's childhood friends, and escapes Dolf's regime with him after they're arrested. After the king steps down, Ollie wins the election and becomes Great Waterland's first president.
Pikkie 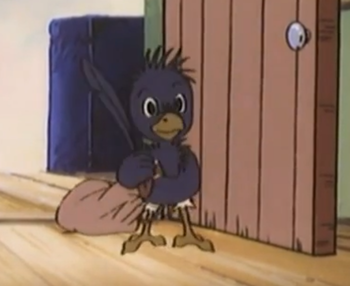 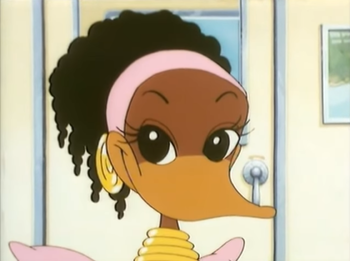 Winnie Wana in her first appearance.
The oldest child of the Wana family and Alfred's love interest. She first meets Alfred while the Wanas are hiding on a train to Great Waterland to escape Atrique's police.
Tom Wana

The leader of the black ducks' resistance in Atrique, which is heavily based on Apartheid-era South Africa. He escaped to Great Waterlands with his wife and children only to leave Winnie and Tom with Alfred, and return to Atrique with Blanche to continue the fight after attaining their citizenship. He's based on Nelson Mandela.

Von Paljas
A polar bear inventor Alfred meets and befriends after traveling to the north pole in order to stop whalers.
Inspector Sherlock
A basset hound police inspector.
Captain Stoppel
A walrus captain.
Lisa Stoppel
Captain stoppel's wife.
Pel the pelican
A pelican who appears as a bus driver, king Radbout's driver, Stoppel's friend who keeps a lighthouse, and later as king Franz's driver.
Professor Ramses
A cat professor from the university and Von Paljas' old friend.
Alfred's teacher
A dog named Bas who's Alfred's teacher.
The White Queen
An apparently magical chess piece that can turn into a living... thing that's shaped like a human from the waist up and has no lower body.
Malahydama (of Mala Hidama)
A yeti living in the Himalayas, whom Alfred and Von Paljas meet when they fly there.
Professor Tsjang
A koala maritime biologist who has won a Nobel prize.
Prince Shallaman
The prince of Salem.
Princess Budor
The princess of Yil.
The king of Salem
Shallaman's father.
Parmezanidas
An ancient hermit crab who gives Alfred and henk advice in their fight against K. Rokodil's fishing business.
Wiedewiegewage
A sawfish Parmezanidas knows. Apparently he's in the shady business.
Cleo Kat-Kammon
The ruler of a tribe of cats in Pyramidland.
Professor Kells
A professor of law who travels to Salem with Stoppel and Alfred. He's a tiny owl.
Ollie's kids
Ollie's five children.
Ollie's wife
Ollie's wife, another stork.
Doctor Livingston
A friend of Von Paljas' who explores the Arlon continent, and believes he has found the origin point of rainbows.
Janola
An Arlonian native from the tribe Livingston had been living with. He acts as the expedition party's guide.
The Dragon
The dragon in the Sinatran volcano. Revealed to be from outer space.
Alem Palem
The sinatran governor who helps Alfred, Von Paljas, and Stoppel to get to the volcano.
Kasim
One of Palem's men.
Queen Nora
A queen from the Arlon continent and the guardian of the pot of gold, a position she inherited from her mother. Her dialogue indicates she has some kind of psyching abilities.
King Alexander
The king of Pyramidland.
The king of Reedland
The king of Reedland and Radbout's cousin.
General Brüll
A general in Reedland's army.
Sergo
The brown rat who appears in Alfred's dream about Dryland. He shows alfred around and explains the country's situation and why it isn't getting better despite the foreign aid.
Leifeet the singer
A swan singer whom Alfred and Henk see on television. He later appears in Alfred's dream.
Vlier the apotechary
The owner of a Polderstadt apotechary. Dolf makes Pikkie steal elephant pills from him.
Stampf the elephant
An ill elephant who visits Vlier's apotechary. His very strong, elephant-only medication is making him recover so fast even his doctor is amazed.
Sheikh Alham
The ruler of an unnamed middle eastern country. His ancestor accidentally freed The Evil Genie of Darkness 200 years ago but trapped him again. His family has kept the bottle in their possession anfåd guarded it since, until it's stolen from the palace in a break-in.
Alishar
Sheikh Alham's fifteen year old son.
The tigers
The two tigers Alham sends to recover the bottle at any cost.
The newscaster
A sunglasses-wearing orangutan newscaster who's literally everywhere?
Valentino
A circus ringmaster.
Jersomina
A trapeze artist in Valentino's circus whom Alfred develops a crush on.
Horst
The human tamer in valentino's circus.
Colombo
The clown in valentino's circus.
Leo the human
The nonsapient circus human who is used the same way old-timey circuses used lions. He also acts like a normal animal, not possessing ability to speak or the human-level sapience all the actual animals in the series do.
Biljel
Von Paljas' seer friend who's the mayor in the Land of Two's poverty-stricken south.
Jordan
Waterland's ambassador to the Land of Two.
Pierrot
A clown who owns a magic violin and lives in the moon, and apparently has psychic powers because he's able to contact Von paljas' seer friend in his dreams.
Dr. Parses

A toucan doctor working in a hospital in Land of Two's south capital.

The king & his court

As a whole
The King's council that consists of, among others, colonel Rangpang, Sir Poen, The Archbishop, and The Secretary Of The Treasury.—-
King Franz Ferdinand
The King of Waterland and the son of King Radbout. Franz seems to be a little divorced from reality and used to living in luxury, but is a mostly good person. He never wanted to be a king and eventually steps down to make Great Waterlands a republic.Missing Mom: No reference is ever made to a queen of Waterland.
King Radbout
Franz Ferdinand's father and the previous king.
Colonel Rangpang
An orangutan navy colonel and a part of the king's council.
Poen van Kalekoen
A turkey with a seat in the king's court.
Unnamed frog minister
Franz Ferdinand's closest aide.
The minister of treasury
A crocodile minister in charge of the royal family's treasury.
The Archbishop
The palace guards
Weird creatures that guard the palace. They vary in anatomy, but they're all grey and warty.

Hannes
Wannes
Lispel
An octopus spy first seen spying for Sparrowland. He has some kind of a compulsion about telling people things (for a price, of course).
Geppe
A hippo who acted as Dolf's closest aide furing his stint as a dictator. He reappears in the final episode, still loyal to Dolf, to help him escape prison.
Mayor K. Rokodil
A ruthless businessman whose car killed Alfred's parents and siblings.
Nina Rokodil
Rokodil's equally greedy wife.
Hannibal
A hippo scientist working for K. Rokodil.
Hippo
A hippo with glasses, and brown hair and mustache, who works for/with K. Rokodil in episode 1 and more in season 2. Gets arrested alongside Rokodil in episode 51.
Krabnagel
A cat bandit who's usually shown trying to eat small people and children. He dissappears from the series after resisting arrest when he's suspected of burglary.
Igor a.k.a Peter
A spy from Sparrowland who later defects and helps Alfred and his friends escape NCP, going to Broad Reedlands with them.
Sparrowland general
Igor's superior on the mission to infiltrate Sea Wolf.
Bart Beton
A beaver who's the CEO of the Concrete Company that had a part in destroying the home of Alfred's parents and Henk. Later appears in episodes 26, 31, and 32.
Mr. Knox
A dog investor who first appears in episode 26 as Rokodil's funder, and later runs for president in episodes 43 and 44.
The Poodle
A female poodle that only shows up in the 26th episode. She's mr. Knox's secretary during their visit to the Himalayas.
The Evil Spirit of Darkness
An evil genie that terrorized sheik Alham's homeland two thousand years ago.
Dolf's parents
Dolf's father Schor, and Dolf's unnamed mother.
Rap the hawk
The hawk who tries to steal the egg Alfred, and later stalks hatchling Alfred before getting beaten up by Henk.
Tam-Tam
The leader of a tribe in Arlon. When the expedition party arrives to his territory via a waterfall, he tries to boil Alfred alive.
The witch
A witch who initially appears as an (apparently) living book illustration. She then appears to Alfred when Ollie's children are asleep and tries to make him marry her.
Nikiloko Poen
A rich Sinatran monkey who owns a third of the island, including the volcano Alfred, Stoppel, and Von paljas need to go to. Nikiloko makes them pay a large sum for passage, and plans to turn the volcano phenomenon into an expensive tourist attraction.
The king of Yil
Princess Budor's father.
Mr. Hoto
A Nipponese businessman who's interested in buying Von Paljas' submarine. Their golf game is initially just a part of the negotiations, but when they disagree about the submarine's name they make a bet that the winner can choose the name.
The golf instructor
A golf teacher hired by Von Paljas. When Winnie comes along, he neglects actually teaching Alfred and instead tries to get close to her, infuriating Alfred.
Michael Duckson
A world famous pop star Winnie has a crush on.
The casino owner
The owner of a casino in Moreena Dolf is in massive debt to. He almost has Dolf killed before he proves he can pay, and then tries to make him give him the whole pot of gold.
The casino owner's minion
A coyote who works for the casino owner. He makes dolf meet the owner and waits for the order to kill him over his debt, but the casino owner tells him off after finding out Dolf has become rich.
The king of the Land of Two
The king of the Land of Two, who naturally lives in the rich north.
The ministers of the Land of Two
The king's classist ministers, who naturally live in the rich north. The bullterrier chancellor Borund is the only named one.

The Fox
The fox that Alfred encounters in the musical.
The Ladder 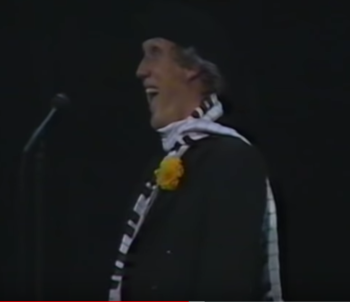 The Ladder as played by Herman Van Veen.
An effeminate talking french ladder that helps Alfred as he's heading towards the king's castle.
The River 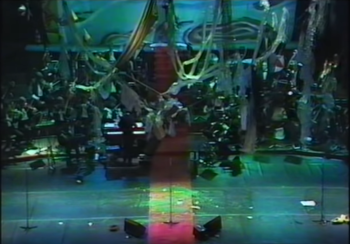 A talking river that helps Alfred.