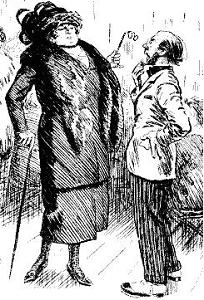 "Why, you're one of the most beautiful women I've ever seen and that's not saying much for you!"
"We are not amused."
— Erroneously attributed to Queen Victoria
Advertisement:

The Grande Dame is the stately older woman — usually of wealth and rank, though often enough only wishing to appear so — who is very often a large woman of ample physique, uptight, humorless, and the butt of jokes. The Grande Dame is usually a spinster or widow, in which case she is likely to become an Old Maid or an Abhorrent Admirer; if she is married, it will usually be to a Henpecked Husband (very often an Uncle Pennybags), whom she will drag to operas (where she will also look down on people who wear the wrong style of High-Class Gloves) and ballets because Men Are Uncultured, though she will more often be a patroness of the arts than The Prima Donna herself. She will also quite often have some sort of spoilt and pampered (and very often overweight) child or pet, a Persian or a Pomeranian or a parrot, on whom the rest of her dependents must dance attendance. In most cases, any attempt at frivolity will draw from her either a frigid stare of disapproval or sheer, blank incomprehension. Nevertheless, she will occasionally turn out to be a sympathetic character as well — very occasionally she will turn out to have a screwball or eccentric streak herself.

As she sinks down toward the cynical end of the Sliding Scale of Idealism vs. Cynicism, she will on uncommon occasions become a Deadpan Snarker, though if she goes too far, she may turn into the Rich Bitch; as she rises toward the idealistic end, she may become the more friendly Maiden Aunt — in very rare cases (like Ellen O'Hara) she may become the saintly Proper Lady. Both extremes are uncommon, however, as in general she preserves the status quo as a Moral Guardian — she may well have started out as an Apron Matron — and her watchword is "Respectability." If she loses this and begins to hit the bottle, there is a good chance she will turn into Lady Drunk.

The trope is most commonly a Comedy Trope, associated particularly with the Comedy of Manners; as such, it serves as a useful device for mocking social pretensions and dates back to the ancient Roman plays of Plautus and Terence, where the Grande Dame appeared as the Matrona. She was not used much in the uninhibited Middle Ages, but made a comeback as the humorless, self-important dueña of the 16th and 17th-century Spanish theater (Small Name, Big Ego Doña Rodríguez is the only one character stupid enough in all the novel to believe that Don Quixote is a real Knight Errant). The prude and bluestocking of the Restoration (such as Molière's Arsinoé and his Précieuses ridicules) and Sentimental comedies (for instance, Mrs. Malaprop in Sheridan's The Rivals) also have some affinities with the type, insofar as they made pretensions to virtue and culture.

However, it was only with the Victorian age that the great era of the Grande Dame opened. Here, with her fur stole and her ancestral lorgnette in hand, the Grande Dame quashed social climbers, sought advantageous marriages for her daughters and repelled impossible matches for her sons, and maintained the natural order of Society with frigid hauteur for a good hundred years and more. In England, she was generally in Debrett

and was called "Lady" something ("Countess" was a particularly imposing title); in the US, she was one of the Brahmins

or the Four Hundred

and was called "Mrs. Van" Whoozis or Miss Firstname. She will still turn up occasionally, to preside over banquets, and to be aghast at the excesses of Feminism or the Youth movement and to wonder why no young ladies bother to go to the cotillion any more.

Her plot function will usually be as an obstruction to the plans of the protagonist, though she will occasionally convert to his side — more rarely, she may assist from the first.

Grandes Dames do not have to be useless, of course. A Grande Dame can be a noblewoman or tribal elder and act as Seers, an Iron Lady, or The Woman Wearing the Queenly Mask stoutly and cunningly defending her domain. Sometimes she's simply an aged Proper Lady.