This is a partial character sheet for Shuriken Sentai Ninninger. Visit here for the main character index. Subjective trope and audience reactions should go on the YMMV page. 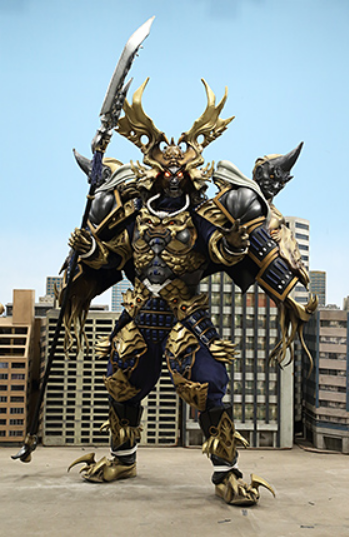 During the Sengoku Period, Gengetsu Kibaoni was an ruthless warlord aiming to subdue the entire nation under his iron-fisted rule. His ambitions, however, were stopped by the Igasaki Ninja clan, who slayed him on the battlefield. But that was not the end for Kibaoni, for he was so evil, he came back to life as a powerful Youkai after swearing that he would return to conquer again 444 years after he fell as a human. It once again fell to the Igasaki Clan to oppose him. After a heated battle, Yoshitaka Igasaki, the shinobi known as the Last Ninja, managed to seal away Gengetsu using the 48 Sealing Shuriken. The danger has passed, but years later, the seal was broken and Kibaoni and his demon army are once again free to wreak havoc on the world.
Kyuemon Izayoi 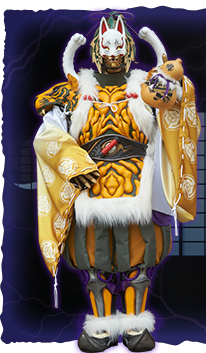 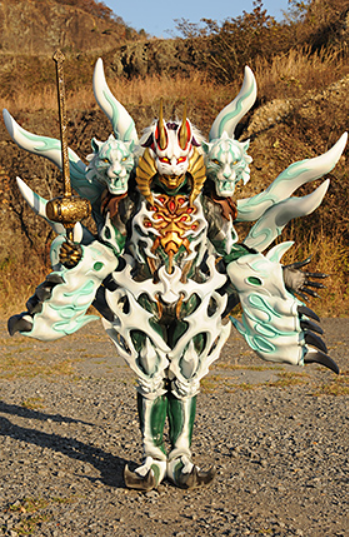 The then only known alive general presently in the Kibaoni Army Corps, and the one responsible for their resurrection in the present day. He possesses two mystical objects. One is a hammer that he stole from the Igasaki Clan, which, along with an evil knockoff of a Nin Shuriken known as a Yo Shuriken, which he used to unseal his lord and to enlarge the defeated Youkai upon their defeat. The other is a gourd, which he fill with the power of fear gathered by those hurt by the Youkai in liquid form. In reality, he's the son of Gengetsu that he personally sent 444 years into the future before his death.
Raizo Gabi 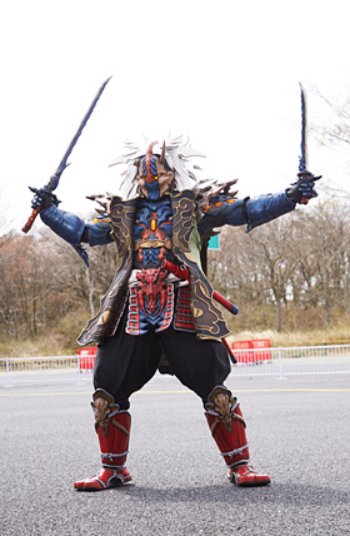 Gengetsu's right-hand youkai, Raizo is the spearhead of the Kibaoni Army Corps. He lusts for power and will stop at nothing to obtain it. His hatred for the Igasaki Clan rivals only his master's.
Masakage Tsugomori 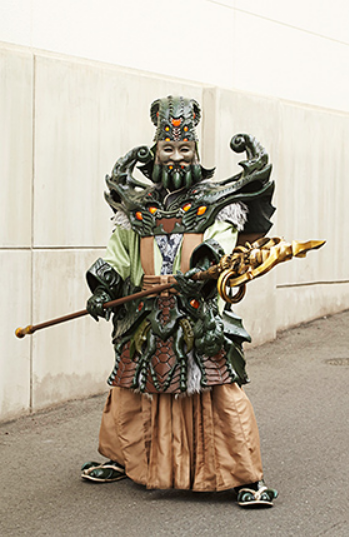 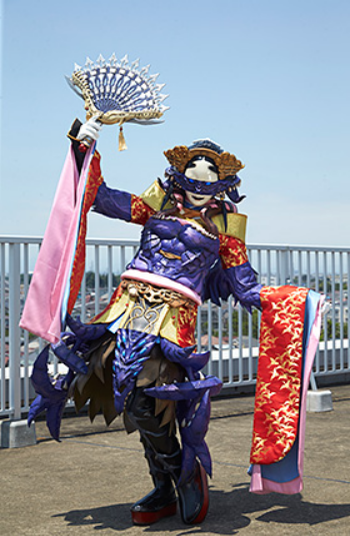 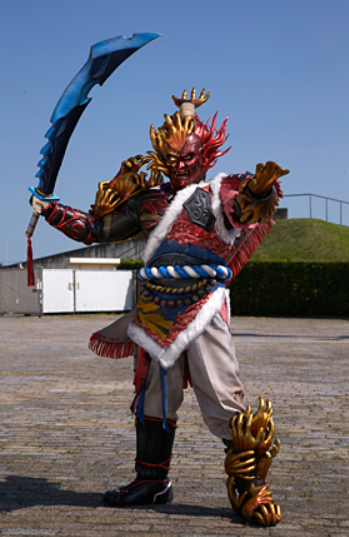 The Samurai Commander of the Youkai Army Corps and the mentor of Raizo Gabi, who serves as the villains's leader for two movies
Western Yokai

Getting tired of losing to the heroes with incompetent Youkai repeatedly, Ariake summoned the Three greatest Youkai from western countries to deal with the Ninningers.

The result of being summoned by the Gashadokuro Yo Shuriken, which Kyuemon obtained by transforming the sealing shuriken that once formed Youkai Kasha, this Giant Youkai briefly did battle with the Ninningers.

In Shiboni 9, to help Kyuemon in exchange for battling Aka Ninger, Raizo used dark magic to upgrade the Hitokarage into the stronger Jukkarage.

The Jukkarage in white vests who tends to Ariake no Kata.

Youkai Of The Week

As Kibaoni was revived, 48 Sealing Shuriken were scattered across Japan. One of them darted into a discarded chainsaw. Being corrupted, the shuriken transformed the chainsaw into Youkai Kamaitachi, and it sow discord and destruction by threatening the citizens with the fear of getting cut.

As the Ninningers train their Nintality, their Gama Gama Guns alerted them of the next Youkai attack. This time, a corrupted sealing shuriken possessed a fire extinguisher and took the form of the aquatic-based monster, bringing tears and fears by throwing bystanders into the river (or any body of water) and invoking hydrophobia.

The third corrupted sealing shuriken possessed a pair of rollerblades and transformed them into a monster specializing in speed. Afterwards, Raizo Gabi got tired of, in his words, "weaklings fighting" and disposed of him, leaving a cleansed sealing shuriken for Kyuemon to summon the Giant Youkai Gashadokuro.

While Takaharu was contemplating why he was kicked out of the dojo when he kept doing team exercises by himself while eating eggs from an oden cart, the fourth corrupted sealing shuriken possessed a refrigerator and transformed it into a monster specialized in trapping. In addition to spewing sticky web, it can swallow things into its icy-cold body.

Ungaikyo initially appears to be a good Youkai who wants to being happiness to children by giving them balloons. He really wants them to be spread far apart from one another so that he can create illusions of the Big Bad in giant form to bring terror to people.

A combination of Kibaoni and Roidmude power, he is a result of a corrupt sealing shuriken possessing a Spider Viral Core. Buruburu is able to access the Roidmude's Slowdown ability along with his power to spray a fluid that causes immense fear in people. After being defeated by the Ninningers, Roidmude 089 and the Great Leader of Shocker use the sealing shuriken to gain access to this form.

Gabi Raizou uses a corrupted sealing shuriken to possess a broken Clarinet, transforming it into Youkai Tengu. Tengu can play a music through his nose to summon a portal, and Raizou abducted one of the Ninningers in so that Aka Ninger will come out and fight him.

A Youkai who was born from a corrupted sealing shuriken possessing a digital watch. Due to his time-travelling ability, he was specially tasked by Kyuemon to retrieve the End Shuriken that was present 10 years ago...

Using a sealing shuriken enchanted by Raizo, Kyuemon implanted it into a carpet to create a sorcerer-themed Youkai. He was tasked to retrieve it from Yakumo's mother, who secretly took it to be used as an accessory of one of her fashion works. Ittan-momen mainly casts transformation magic, in which he uses to reduce Ninninger's numbers, one by one.

A brawny Youkai with super strength augmented further by a construction crane. He was sent by Kyuemon to terrorize nearby people.

As Raizo instructed Kyuemon to draw Aka Ninger to him, she pasted a corrupted sealing shuriken onto a kettle. Enraenra can emit steam that curse nearby people into feeling down.

The first Youkai created by Masakage by fusing a corrupted sealing shuriken with a pair of sneakers. He challenged Aka Ninger, Ki Ninger and Star Ninger to a race while Masakage held the rest of the Ninningers as well as other ninja competitors as hostages.

Masakage inserted a corrupted sealing shuriken into a public phone and instructed the resultant Youkai to depower the Ninningers by taking away their Transformation Nin Shurikens. Yamabiko has the power to call one of the ningers and impersonate another by voice. As Shiro Ninger, he tricked Aka Ninger into thinking that she has been kidnapped and he had to give out the rest of his teammate's Transformation Nin Shurikens in exchange of the hostage.

In his next antic, Masakage instructed Youkai Futakuchi-onna to take control of the team's Otomo Nin. Futakuchi-onna got hold of Rodeomaru, convinced him that he has not been treated properly by Star Ninger and got him to sign a contract, which put him under a spell where he turns berserk.

Masakage merged a corrupted sealing shuriken with a fountain pen Tsumuji dropped and tasked the resultant Youkai to track him to locate the Ninninger's team base.

Before enchanting an inflatable raft with a sealing shuriken, Masakage cast a spell so that only Star Ninger's Ninja Star Burger can detect it. Umibozu can summon a mist that shows an individual's fear and lure them into the sea. As Star Burger rescued a group of people from drowning this way, Umibozu sprayed the mist at him......

Otoroshi has the power to control people, except it is too weak to be used efficiently; it only affects the target for a short period of time and cannot be used on another person simultaneously. But for some reason, Ao Ninger continued to defend Otoroshi when the spell should have worn off......

After sending Youkai after Youkai at the Ninningers, Masakage finally found the weaknesses of each of the teammates and is ready to destroy them. He got help from Gengetsu to create super strong Youkai for another measure. Using 2 corrupted shurikens at once, he turned a toolbox kit into Advanced Youkai Nue, who not only beaten the Ninningers with ease, but also destroyed some of their Nin Shurikens in the process, leaving the team with a huge handicap.

A stray corrupted sealing shuriken possessed an Office Lady's handbag and transform into an elephant humanoid with the ability to eat a person's lifelong dream.

In an attempt to gather more fear for Ariake no Kata, Kyuemon pasted a corrupted sealing shuriken on a railroad crossing signal, turning it into Nurikabe. It has the ability to block people with "wall in life", causing despair.

While the male Ninningers trick their girls into getting scared in a "haunted" abandoned warehouse, Ariake got an idea to ambush the heroes and had Kyuemon use a corrupted sealing shuriken on their ice shaving machine.

Unlike all the other Youkai, this one was created by first summoning six Gashadokuro and then fusing all of them together into Oboroguruma, the corpse-laden wagon.

When Ariake felt unwell and desperately needed despair, Masakage cast a barrier while turning a computer keyboard into a Yokai to target gaming kids and harvest their fear in secret.

Formed offscreen from a Swiss army knife, Amikiri is just as dangerous as you'd expect.

Formed from a flag by Mangetsu, this is the first Yokai to use up four corrupted shuriken at once.

Formed from one of the most unlikely sources yet, a card game.

After defecting from Yoshitaka, Kyuemon set up his own Ninja Corps. It consists of 4 Dark Ninja disciples summoned through scrolls and they are backed by their own footsoldiers, the Supparage.

With Kyuemon defeated by the Ninningers, Masakage takes his Mallet and Yo Shuriken and used them to summon one of the Dark Ninjas.