Saiunkoku Monogatari has a rich and diverse cast and the list below features important primary and secondary characters in the series. 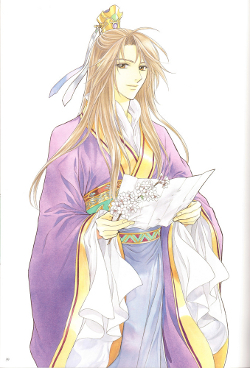 The nineteen-year-old Emperor of Saiunkoku. Basically a big dork, albeit with Hidden Depths.

Advertisement:
Shi Senka
Ryuuki's father, the previous Emperor, deceased by the time of the story.
Shi Chouka
Ryuuki and Shuurei's daughter, and future Empress of Saiunkoku. 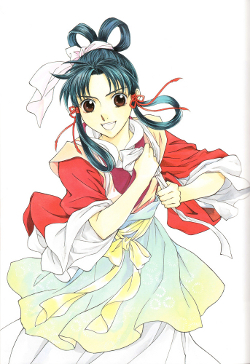 Shuurei's doting father, in charge of the Palace Archives and, to all appearances, mostly useless outside of them. 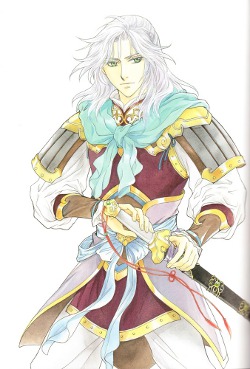 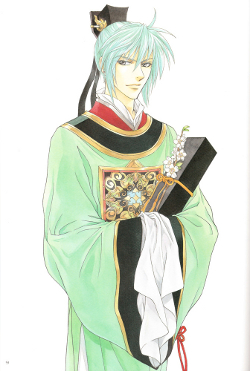 Vice Minister of Civil Affairs under Kou Reishin. A promising up-and-coming government official, he is specifically assigned as an aide to the Emperor... provided he can ever find him.

Shouka's wife and Shuurei's mother, who died of illness when Shuurei was a little girl.

Shouka and Reishin's youngest brother and the proxy leader of the Kou Clan. 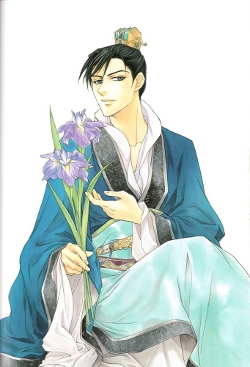 A general of the Imperial Army. Like Li Kouyuu, he's an up-and-comer in the Imperial Court and was assigned as a personal retainer to the Emperor. Reputed to be a ladies' man, but usually seen joined at the hip with Kouyuu instead.

Leader of the Sa Clan and one of the three "grand old men" of the Imperial Court, along with Shou Yosei and General So.
Hyou Eiki

Sa Enjun's wife, and not a woman to be messed with.
Kourin

One of Sa Enjun's nephews.

Enjun's granddaughter and Kokujun's fiancee. She inherited the power of her grandmother's Hyou Clan bloodline.

The Minister of Finance. One of the odder characters in the Imperial Court, which is saying something.

Head of the Hyou family, although that is a position that is ordinarily held by a woman.

Hyou Riou's son, who also goes by Riou, although he says at one point that it isn't really his name.
Hyou Ren

Hyou Ruka
Sister to the head of the Hyou clan Riou, and mother of Ren.

A young man who takes the Imperial Examinations in the same year as Shuurei and Eigetsu.

Heki Karin
An eccentric woman who is an art expert. She is the famous artist who will be the next head of the Heki clan.

Officials and Residents of the Imperial Capital

Usually referred to as "Advisor Shou". With Sa Enjun and Grand General So, he's one of the three Grand Officials of the Imperial Court. Shou is one of the Eight Immortal Sages, specifically the Sage of Purple.

The third of the three Grand Officials of the Imperial Court, with Shou Yosei and Sa Enjun. Usually appears for the sole purpose of beating the stuffing out of swordsmen fifty years younger than he is.

Lady-in-waiting to the Imperial Harem; she assists Shuurei during Shuurei's time as Consort. Shouka took her in from the Hyou Clan when he abducted Shokun, and made her one of the Wolves of the Wind, in which capacity she serves briefly as a double agent between Sa Enjun and Shou Yosei.

Contemporary of Reishin and Kijin and inarguably the sanest of the three. Mild-mannered, pleasant, and very adept at playing politics.

Introduced late in the story, after Shuurei comes back from the Sa Province. Makes a failure of a proposal to Shuurei on his father's orders. Later becomes Shuurei's colleague and helps her in Ran family arc.

Riku Seiga
A friendly and confident young officer who was without an official job. In truth, he is a promising and utterly ruthless young official of Governmental Inspection Department
Kouchou
The head courtesan of Kogorou, the best pleasure house of the capital and where Shuurei works for a while as an accountant. Beautiful and one of the people you should not piss off.
Ki Kouki
Head of the Governmental Inspection Department. Ruthlessly strict and considers Shuurei a complete idiot.
Ou Ki
Chancellor in Central Government who often criticises Ryuuki's policies.
You Shou
Investigator of the Ministry of Personnel and thus a subordinate of Reishin. 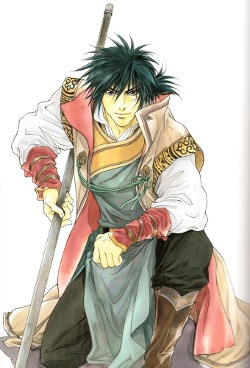 An old friend of Seiran's, and general go-to guy for when you need someone to open up a can of unadulterated whoop-ass.

A thirteen-year-old boy who comes to the Imperial Capital to take the qualifying examinations for government office. Keep him away from sake.

Sai Rin
Representative of the Merchant Guild and the manliest woman in Saiunkoku. Famous for her inventing skills.
Sai Shou
Sai Rin's brother. Calculates gains and losses as well as devises money making schemes all the time.

Regarded as the best doctor living in Saiunkoku at the time of the story. He treated Shuurei when she was a child, since she was often ill. Actually the Sage of Yellow, one of the Eight Immortal Sages.