Webcomic / Roomies!, It's Walky!, Joyce and Walky!
aka: Roomies 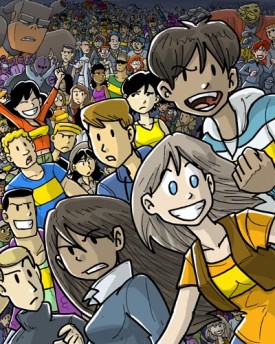 Roomies!, It's Walky!, and Joyce and Walky! are three interconnected comics in the Walkyverse, and can be found (along with relevant Shortpacked! storylines) here,

with commentary from Willis.

At this point it re-branded itself It's Walky! and began to focus on the adventures of a Government Conspiracy called SEMME, dedicated to dealing with extra-terrestrial threats to Earth. The titular David "Walky" Walkerton, a hyperactive member of Squad 128, found himself fighting alongside Sal, Joe and Joyce, all of whom were inducted to SEMME and placed in his squad, with Stuffy Brit Jason Chesterfield, Jerk with a Heart of Jerk Mike Warner and even-more-hyperactive Robin DeSanto rounding out the central cast.

After a random collection of Where Are They Now Epilogues, Willis launched Joyce and Walky! in 2005, a Dom Com centering around the Official Couple of the verse, playing out the affairs of characters after the retirement of It's Walky!. Only strips published on Saturdays were available to the public; Tuesday and Thursday material were for subscribers only. Though initially described as "a post-apocalyptic tale of domestic hijinx", it quickly developed its own sci-fi oriented storyline based around the offspring of SEMME members from alternate futures appearing in the main universe in the present day. (Around the same time, Robin and Mike got spun off into Shortpacked!)

This strip was put on hiatus in 2010, and later that year got an Ultimate Universe in Dumbing of Age, which transplants characters from all of Willis's other comics into Indiana University and strips off the sci-fi elements, thus going back to the original premise of Roomies!...and so the circle is complete.

Joyce & Walky! got taken out of mothballs on May 13, 2012, with sporadic updates between then and August, and ultimately ended on May 17, 2015 with the scene it left off on. In June of that year, Willis announced he and his wife had been drawing a new comic for two months, It's Pregnancy!

, depicting Joyce giving birth to her and Walky's child.

As mentioned, the entire story is being gradually reuploaded to a new website

, with commentary under every strip from Willis. The main purpose of the site is to give people the chance to read it in chronological order, and apparently to induce a sense of despair in Willis.

Not to be confused with a rather staggering number of webcomics with "roomie" or "roomies" in the title.

The cast of these series is vast, but the main players in each can be boiled down to:

Their main opponents are the Purple Aliens ('Alien' being the actual name of their homeworld), led by Head Alien; the British Ninjas from a secret organization led by Jason's father Dargon Chesterfield and Jason's former lover Penny Worthington; and the Martian Empire.