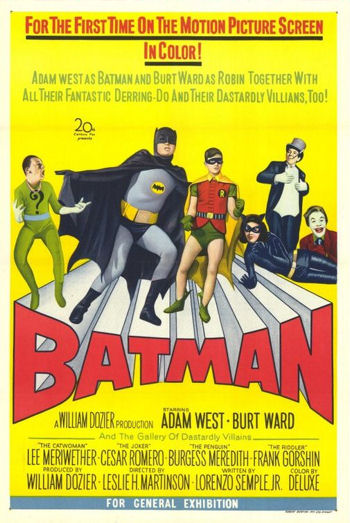 "Some days you just can't get rid of a bomb!"
Advertisement:

A full-length feature film released in 1966 based on the then-popular Batman TV series, which itself was based on a series of popular comic books.

The movie stars Adam West and Burt Ward as our Dynamic Duo as they rush to prevent The Joker, Catwoman, The Riddler and the Penguin (played respectively by Cesar Romero, Lee Meriwether, Frank Gorshin, and Burgess Meredith) from taking over the world. Hilarity Ensues.

This movie is technically the very first example of a superhero feature film (not theatrical, that would be 1943's Film Serial The Batman) from a major Hollywood studio, preceding Richard Donner's Superman by 12 years. Previous efforts to bring DC and Marvel characters to the big screen were limited to matinee serials, cartoons, and the 58-minute indie film Superman & the Mole Men.