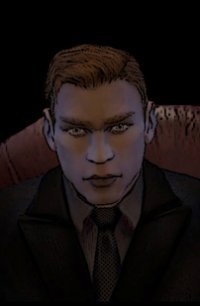 Voiced by: Andy Milder
The folly of leadership is knowing that no matter what you do, behind your back, there's hundreds certain that their own solution is the sounder one and that your decision was the by-product of a whimsical dart toss. I pronounce the blast sentence, and I soak the critical fallout. I make the decisions no-one else will. Leadership... I wear the albatross and a bullseye.

The Ventrue Prince of Los Angeles' Camarilla kindred, and therefore the leader of the 'new kids in town'. LaCroix is a classic Ventrue: A domineering, manipulative politician with entitlement issues and a taste for Realpolitik. It soon becomes obvious that he is on very sandy ground concerning both the Anarch and his own Camarilla "underlings", with nobody really respecting him at all. After condemning the main character's Sire to death in the opening cutscene for breaking the second tradition, he is forced to leave the PC alive when it's obvious he's got a PR nightmare on his hands. 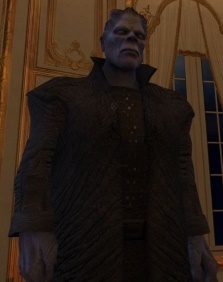 Oh, the Sheriff, yeah. I love how everyone's talkin' about that big mystery. It's like someone Embraced a doped-up gorilla!
— Jack

A huge, mute kindred who follows LaCroix everywhere as his bodyguard. Wields a gargantuan sword and apparently comes from Africa. He was the one who beheaded your Sire. 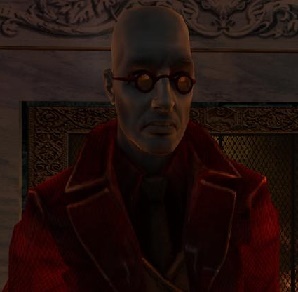 Voiced by: Jim Ward
True power lies not in wealth, but in the things it affords you.

The Tremere Primogen and Regent, Strauss is a mysterious, unfailingly polite sorcerer often found in the Tremere chantry Downtown. Unlike many of the other Elders, he actually shows some respect to the Fledgeling. 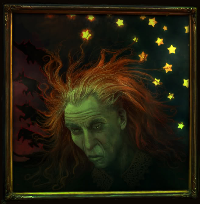 Voiced by: J. Grant Albrecht
I am confident no cure for my condition or that of my beloved wife lies within our figurative minds, waiting to be unlocked by the correct combination of memories recovered from our childhoods. And I am most certain it has nothing to do with the relationship between myself, my parents and my... genitals. Sorry, Sigmund, but I choose to stay my course. In time, too, may your star fade and disappear...

The Malkavian Primogen, a former psychiatrist obsessed with finding a cure for his wife's Malkavian catatonia. Little is known of him until you're asked to inspect his mansion. 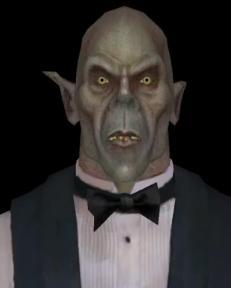 Voiced by: Neil Ross
By the clack-smack cracking of my thumbs, something wicked this way comes. I don't remember seeing you on the guest list for the dinner party; we're having a wrap party for the Misfits about forty years late. Cast and crew only, boss.

The Nosferatu Primogen and former Hollywood star, now the sarcastic king of Hollywood's underworld. One of the most secretive members of the local Camarilla. 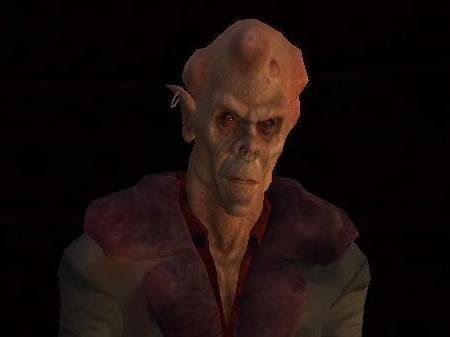 Voiced by: Dee Bradley Baker
News travels down the Kindred grapevine like wildfire, and that courtroom spat between LaCroix and Nines Rodriguez is a juicy little morsel. And you in the middle... how interesting.

A Nosferatu agent of the Camarilla in Santa Monica. Living out of an abandoned fuel tank, he can show you the way to the Sabbat storehouse, but you must first persuade Therese Voerman to call off her feud with him. He also has a ghoul running errands for him in town. 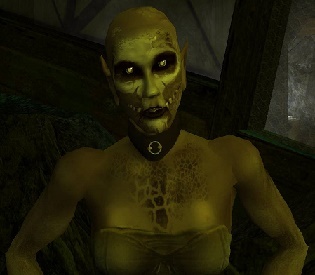 Voiced by: Margaret Tang
Bitch! I can't believe she got the cover of Glamorella this month!

One of Gary's most recent Childer, Imalia used to be a world-famous model; punished for her vanity by a Nosferatu Embrace, she still hasn't gotten over her lost beauty or the fact that her place in the spotlight has been usurped. In fact, she's willing to offer quite a bit of money in exchange for any dirt on her replacement... 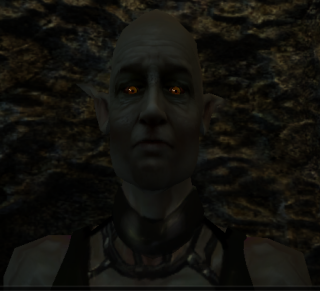 Voiced by: Jay Gordon
Oh my god, are you kidding me? What are you using for security down there, a Trash-80? Guys, it's called "encryption." This is too easy; I'd let you off the hook, but stupidity always brings out the asshole in me...

A former master hacker, Mitnick's life actually seems to have improved as a result of his transformation into a Nosferatu, unlike Gary and Imalia. However, he still needs your help with setting up a few Schrecknet hubs around the city... 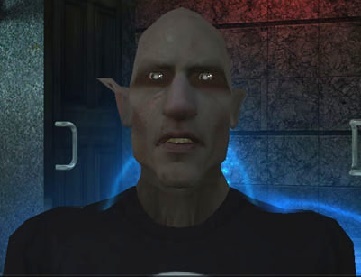 Voiced by: Jay Gordon
I've got no excuse — a Nosferatu getting caught by a bunch of humans... this is a new low.

A Nosferatu agent in Chinatown, he ended up getting kidnapped by the Fu Syndicate and experimented on. In order to receive information on the whereabouts of the Ankaran Sarcophagus from Gary, you're going to have to rescue him.