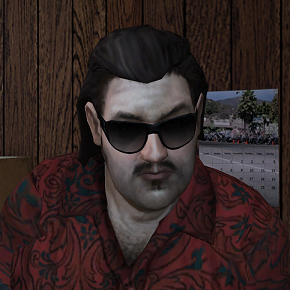 Voiced by: J. Grant Albrecht
I used to do some bounty huntin' myself back in the day. Takes a solid set o' brass balls to make a good bounty hunter, I'll tell ya that much.

A bail bondsman operating from Santa Monica, he hires the Fledgling to look for Carson, a missing bounty hunter working for him. Once you handled this for him, he will also offer you the opportunity to do some bounty hunting for him as well. 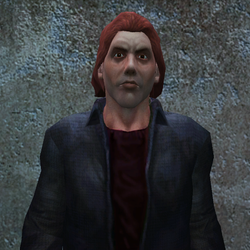 I'm tellin' you… I've been on some weird cases, but this one takes the cake.

A bounty hunter working for Arthur Kilpatrick who went missing while working on a case related to a man named McGee. 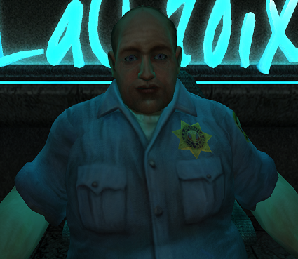 Voiced by: Daran Norris
Ah, you know, I'm keeping the undesirables out, and the innocent safe and secure. I'm the thin blue line that separates the crazies from the hardworking decent folks. Yup, long as I'm around, Mr. LaCroix's got nothing to worry about.

A fat security guard initially assigned to guard a Santa Monica art gallery — up until you break in and vandalize the paintings. He's then reassigned to guarding the Venture building for Prince LaCroix. 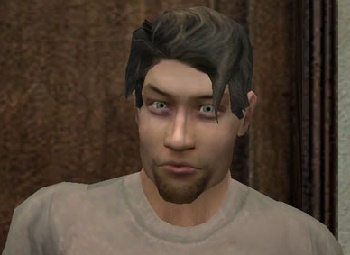 Voiced by: Robin Atkin Downes
Santa Monica is dead. I don't know why anyone comes out here any more.

Owner of the pawn shop below the Fledgling's Santa Monica haven. He sells weapons to you on either Mercurio's, Kilpatrick's, or Knox's word. 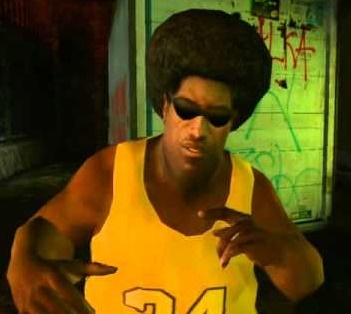 Voiced by: Phil LaMarr
You can call me Fat Larry with an F-A-T, cuz I know I got a weight problem an' I just don't give a fuck!

An enthusiastic black-market salesman, he operates out of the back of his truck, selling just about anything to anyone - though getting to his special stock may take a few favors. He's a friend of Venus Dare's, and will put in a good word for you with her if you help him out. 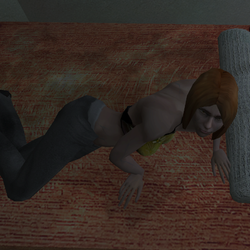 An escort girl living at the top floor of the Skyeline Apartments. While she'd fallen in love with Paul, an Anarch ghoul, their romance is cut short by a sudden disease. 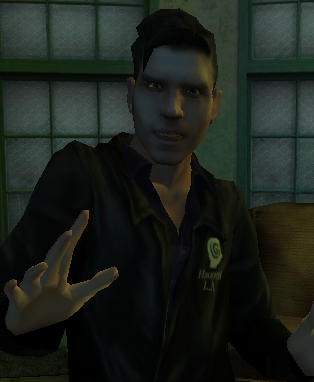 My crew... my crew, w- we were... we were here shooting for my show. I'm a parapsychologist — Haunted LA? Oh god, it was right behind me. We've got to get out of here!

The producer of Haunted LA, a TV show investigating the paranormal. In truth, his show is a scam — he and his crew just go to creepy locations and make up stories. Unfortunately for them, the last location they visited, an abandoned hospital, happens to contain a real supernatural creature — namely, a flesh-eating vampire named Pisha. By the time you meet him, he is running away after seeing his entire crew getting slaughtered, leaving it up to you to prevent him from talking about what he saw and breaking the Masquerade... 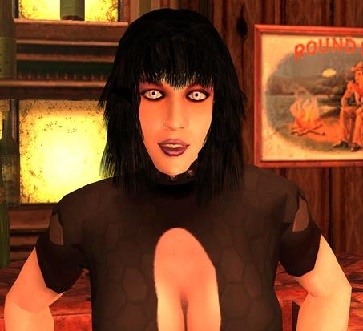 Voiced by: Kat Cressida
Everybody comes in here's got to have to a shot - house rules: inhibition's the first thing to go. Two more of these, and you'll be telling me your nastiest, dirtiest stories; I am your Beat Priestess and it's time to confess.

The beautiful owner and bartender of the Confession Nightclub. Having started her club with the aid of a local Russian Mafia boss, she's gotten sick and tired of paying her benefactor with sexual favors, and needs an assassin — you. 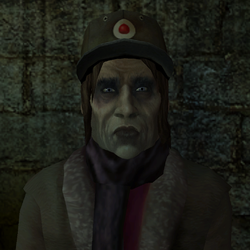 Don't want to go back to the bad place, friend. [multiple coughs] Don't let the monster come back and take me there...

An old homeless man who was one of Brother Kanker's many victims to suffer the plague. The Fledgling ends up asking him for information during the Brotherhood of the Nine Circles questline. 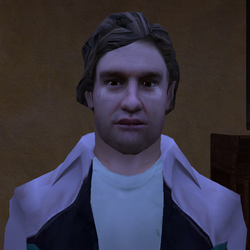 Writer's such a tarnished term, you know what I mean? It's like... like, every other guy says he's a writer, right? You write a letter, you're a writer, you know? I-it's like... What I do, that's like, that's screenwriting, like, I encapsulate the essences of excellent film in my scripts, alright? Like, I'm a a- I'm like a blackmsith with pens, right; I'm a welder of montage.

A night clerk working at the Lucky Star Motel, friend of Velvet Velour, and an amateur writer who hopes to make his success with a screenplay he is working on. Unfortunately for him, said script happens to be an accurate depiction of Kindred Society. Velvet tasks you with getting your hands on his screenplay — preferably non-lethally — and destroy it to preserve the Masquerade. 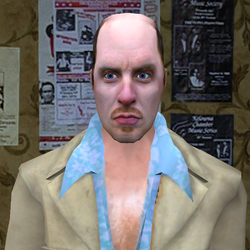 Man, we got everything you'll ever need. Soft-core, hard-core, gay, straight, farm or furry. We got shockers, shiverers, self-lubricators and strap-ons. Chains, crops and canes are in the back next to the triple-ripples. Like I said, we got it all.

The sleazy owner of the Sin Bin, an adult store in Hollywood. He employs the Hunter Chastity as a peep show dancer and can also give the player information about the mysterious snuff film sought by Isaac Abrams. 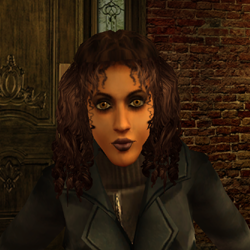 Is it drugs? Something like that? Look, let me make a call — we'll get you some help. Nobody's judging you. They'll be happy to know you're alive!

A friend of the player character from before their Embrace that they unexpectedly meet in Hollywood. 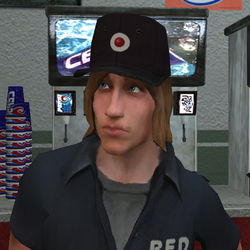 Voiced by: Josh Paskowitz
S'up? ... Oh. ... Welcome to Red Spot, home of the Monstro-Chug, 72 ounces of your favorite beverage for 89 cents, blah blah. You need some help or something?

The cashier at the Red Spot convenience store in Hollywood. A bored teenager looking to pay for his musical expenses, Slater also sells black market weapons if you ask him about "the special". 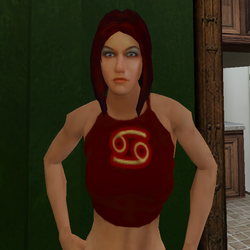 I mean, just look at her! Too fat, big teeth, and her complexion! Does she wash her face with a cheese grater?
— Imalia

A former "fluff girl" who, after Imalia's Embrace, replaced her as a celebrity and model, much to the latter's rage. Imalia tasks you with placing cameras in her house so she can get dirt on her and ruin her image. 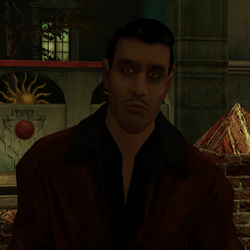 Maybe if I reviewed more Pancake Huts, you'd know me.

A self-important food critic who needs to be convinced to pan a particular cafe.

I don't want any part of that scene. I hear people seein' that tape ain't been comin' home for dinner.
— Flynn Boyle

A Snuff Film company in Hollywood responsible for publishing a mysterious, disturbing video tape that terrorizes everyone and seems to be related to the supernatural. Isaac tasks you with recovering said tape for him. 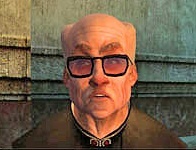 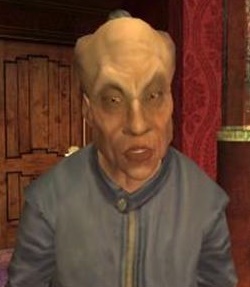 Lu Fang
Voiced by: Keone Young (Lu Fang)
You want your fortune read? You give me five dollar, I give you "secret Chinese enlightenment"! Only stupid person not want to know future!
— Ji Wen Ja
Let me tell you something - you come closer so can hear - let me tell you something. Kids. Kids don't know nothing. Because... because you see them... you see them running in the street. They do crime, but not... not... not crime not organized! Just thugs! Just... shoot — bang! — and steal. It just a mess. Not so organized... hmmph.
— Lu Feng

Two NPCs involved in a Chinatown Sidequest. They are former friends and retired Tong hitmen, who hid a pretty amount of cash (the bounty of a difficult contract they executed together), stored in a box with two keys (each being held by one of them). Each of them tries to hire the player character in order to kill the other and steals his key, then share the treasure with the player character. 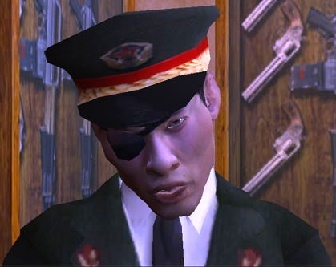 Voiced by: Keone Young
Welcome back!

The merchant in the Chinatown area, Tseng inherited his family's herbal medicine store and is more than happy to help you with good herbal remedies for all your Tong-related problems. He has most definitely never been involved with the Chinese Army. 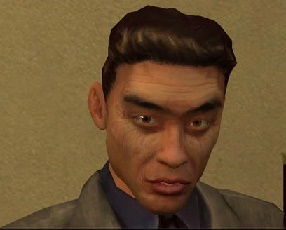 Voiced by: Michael Yama
For a long time, I have been trying to clean up Chinatown. It was a difficult job, but the community came together and we started to take back our streets from the criminals like the Tong. Businesses re-opened, families moved back into their homes. [...] I thought that the Tong were almost gone, but then something happened. Their numbers began to grow and suddenly they had a lot of money to buy weapons. With them followed the drugs and the violence. It is almost worse now than before.

A Chinese immigrant/businessman and pillar of the local community in Chinatown. His honest nature and desire for a safe, crime-free environment put him afoul of a local gang. 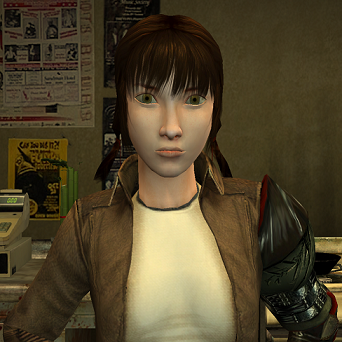 O-gami Yukie desu. Now I return you to hell.

A Japanese demon hunter who works in a noodle shop in Chinatown, currently searching for the demon who murdered her sensei. 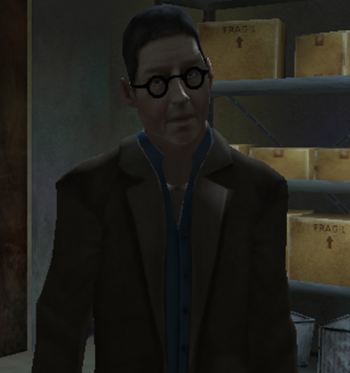 I am a man of my word and I owed a debt to Wong Ho. By paying that debt, I have made an enemy of the Tong, who I once belonged to.

A friend of Wong Ho who is well-informed about the Tong, and reveals to him where they are holding his daughter captive when she is kidnapped. Wong Ho later directs you to him in order to help you find Barabus. 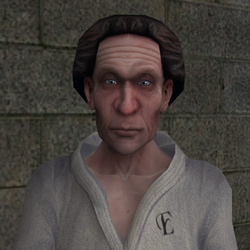 The archaeologist who discovered the Ankaran Sarcophagus. This makes him the most likely to open it — which, unfortunately for him, means he ends up kidnapped by the Society of Leopold under the pretense of "protection", with the intention of using him as bait for LaCroix. The Fledgling ends up tasked with rescuing him and learning whatever he can from him.