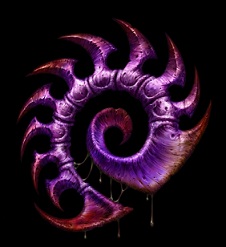 "The zerg are nature in all her fury."

After the Xel'Naga left the Protoss and Aiur, they found the planet Zerus, where they found a race of small insectoid aliens that could parasitically control their hosts, and assimilated genetic data from them to evolve and grow stronger. The Xel'Naga chose this race to continue their experiments, believing they possessed "purity of essence", and created the Zerg Swarm. As part of their experiment, the Xel'Naga created the Overmind, in charge of a Hive Mind that reigned in many of the Zerg. The Overmind eventually turned on its creators and destroyed the Xel'Naga, and its Zerg departed to the stars.

Under the Overmind's control, the Zerg Swarm began a mission to infest and assimilate all life in the galaxy — knowing of the Protoss, the other creations of the Xel'Naga, the Overmind deemed their assimilation to be the race's destiny. The Zerg not controlled by the Overmind remained on Zerus and evolved into intelligent, independent beings with a pack mentality, the Primal Zerg.

During the Second Great War, Sarah Kerrigan returned to Zerus, and the two halves of the race were made as one under her rule.

open/close all folders
Race as a whole 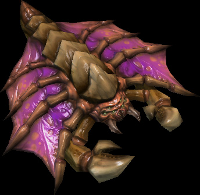 The Zerg worker, in charge of gathering resources. Can lay down on creep to mutate into the Zerg structures. 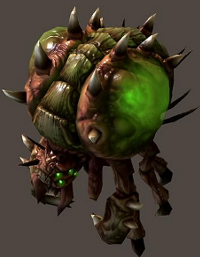 A flying unit that provides the ability to control Zerg, any Zerg player should have far more of them than needed. They provide numerous other skills including detection and unit transport. 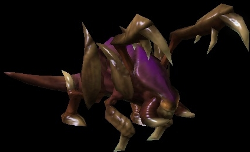 The basic Zerg unit, a velociraptor-like creature arms with fangs and claws to tear apart anything they can. 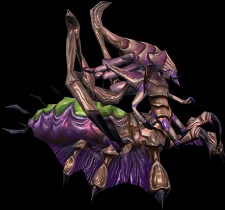 A ground-based unit that specializes in supporting the development of the base with various abilities and providing a pinch ranged attack against early raids.

In Heart of the Swarm, her abilities undergo another change for the campaign. Now called the Swarm Queen, she's the only source of spreading Creep via her Creep Tumors ability, and she's lost her ability to induce hatcheries to produce extra Larvae (since hatcheries now produce up to nine instead of the original three). 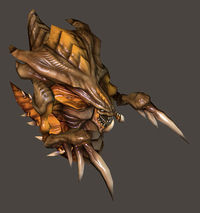 The Zerg ranged fighter, tensing its muscles to snap out needle spines from its shoulder plates as fast as any bullet. 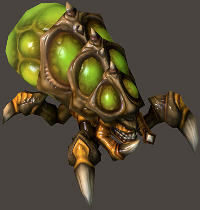 An evolution of the Zergling, they're rolling suicidal bombers that explode on impact. 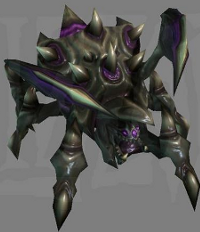 An aptly-named tier-one-point-five ranged attacker, they spew acid to attack and get a major boost to Regenerating Health whilst burrowed. They can also move while burrowed. 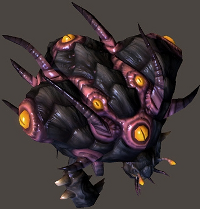 An evolution of the Overlord, they can disable enemy buildings in the process of building or researching something, and spawn Changelings to spy on enemies. 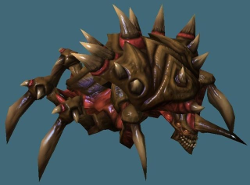 An evolution of the Hydralisk, they're defenseless above ground. But once burrowed they can unleash waves of spines along the ground to impale enemies from below. In Heart of the Swarm they're diversified into the Lurker and the Impaler. The Lurker returned to multiplayer in Legacy of the Void, just as effective as ever. 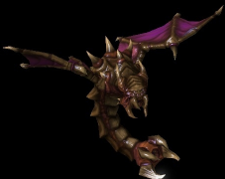 The standard Zerg flier, they move fast and attack enemies by spewing Glaive Wurms at them, which bounce off the initial target to harm nearby enemies as well. 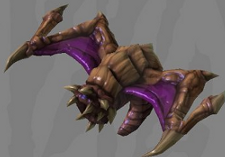 Suicidal dive bombers, they sacrifice themselves to inflict heavy damage to enemy fleets. 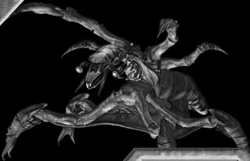 The Zerg flying spellcaster, she supports the swarm with various delibitating abilities. 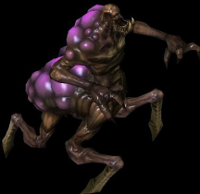 An advanced form of the Infested Terran, they attack with claws and are barely recognizable as being human once. They start out as a special enemy unit seen in a handful of campaign missions in Wings of Liberty, then become a full-fledged Zerg unit in Heart of the Swarm. 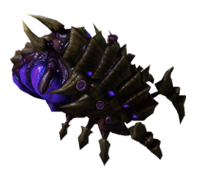 A support caster, they can take over the minds of enemies, spew eggs that hatch into Infested Terrans, and use "Fungal Growth" on enemies to pin them in place and a bit of damage. Like Roaches, they can move while burrowed. 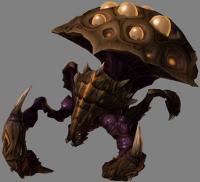 A siege unit added with Heart of the Swarm, they can take root in the ground and unleash hordes of small locusts, continually and freely spawning attackers on enemies. 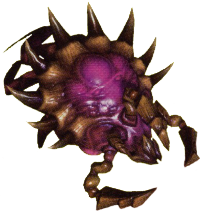 An anti-armor flier, they act as a counter to heavier air units that Mutalisks can't compete with. 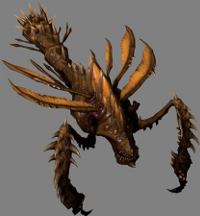 A new spellcasting flier in Heart of the Swarm, they can lash enemies and pull them out of place, or do the same to allies to pull them to safety. They can also spit clouds to limit enemy attack range, and regenerate energy by leaching health off friendly structures.

Ravager
Introduced in Legacy of the Void, the Ravager is an artillery unit evolved from the Roach. They launch deadly bursts of Corrosive Bile onto their foes from above. 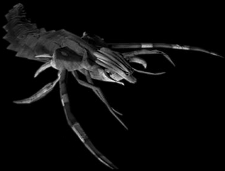 A specialized Zerg strain laying at the top of their tech tree, Defilers can support the swarm with the various toxins it can spew. 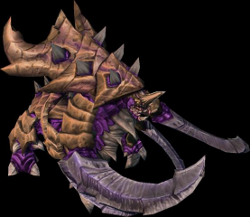 A massive Zerg breed that looks like an elephant if it was designed by Satan, they cleave enemies apart with their Kaiser Blades.

A massive and slow-moving unit evolved from the Mutalisk, they fire globs of acid to destroy grounded targets from out of conventional ranges. 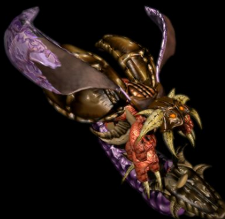 Another strain derived from the Mutalisk, they launch corrosive acid at enemy fleets that eat away at them and slow them down.
Brood Lord 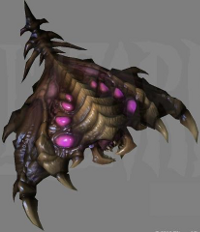 An evolution of the Corruptor, it produces Broodlings from its body which it then hurls at ground targets, not only damaging them heavily but leaving the Broodling down there to wreak further havoc on their own. 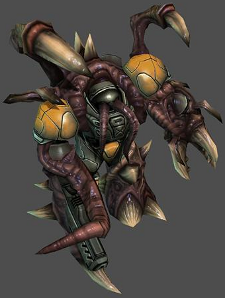 "Live for the Swarm!"

Have a Queen infect a Command Center and this is the result, a Zerg-controlled Terran that will sacrifice his life for the Overmind. In StarCraft II multiplayer, they are instead spawned by Infestors. 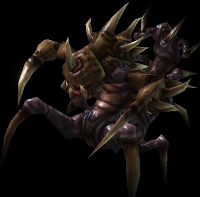 A massive special Zerg breed and terribly powerful, it appears as an optional foe in some missions, yielding valuable DNA for research when killed.

Technically more of a building than a unit, the Nydus Worm is produced by the Nydus Network and bursts out of the ground anywhere in line of sight. There it can disgorge any units "garrisoned" in the Network or pick up units.

Another massive Zerg breed only seen in two missions, it is incredibly strong and takes a lot of firepower to take down. 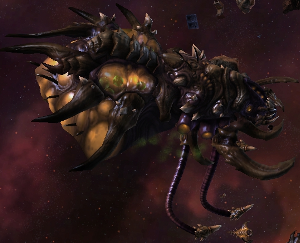 An utterly huge breed of airborne Zerg, tasked with defending Char in the final battles. In Heart of the Swarm, Kerrigan uses one as her base of operations between missions and can choose to summon a weaker version as her final ability.

Torrasque
"Sir, we've just had a whole cargo-ship full of whoop-ass dumped on us! We ran into a new strain of Ultralisk and it took a lot o' pepper to bring it down."

Hunter Killer
"Cerebrate, take these, the deadliest of my minions."

The elite strains of the Hydralisk, they are the finest creations of Daggoth and are only used a handful of times. They return in a couple missions in Starcraft II, though harder to notice without their unique coloring as in the original game.

Devouring Ones
Similar to Hunter Killers (Hydralisks) and Torrasque (Ultralisk) they are the Hero types of Zerglings.