"If society is defined by how well its members comprehend one another's interests and culture, the Protoss manage to eclipse us merely by existing."
— Jake Ramsay

The bulk of the Protoss race who live on Aiur follow the Khala, the teachings of the philosopher Khas that encourages unity and peace through their communal psionic link. The Protoss Empire operates under a caste system, divided into the Templar, the warriors; the Judicators, the politicians; and the Khalai, the working class. Each caste in turn consists of different tribes, and are overseen by the Conclave, an elite group of elders mostly taken from the Judicators that act as the rulers of the race.

When Aiur was invaded by the Zerg, the Conclave's efforts to fight them fell short of success, and it was only through the intervention of Raynor's Raiders and allies of rogue Executor Tassadar that the Overmind was destroyed and the invasion thwarted. Yet the Conclave was destroyed in the war and the planet too heavily infested to be saved after the losses suffered, thus the Khalai Protoss fled to Shakuras to rebuild their civilization alongside the Dark Templar, becoming the Daelaam. 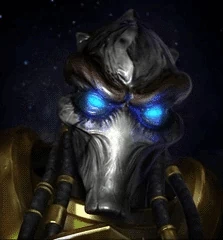 The Twilight Messiah.
"The Overmind has come to destroy all that we hold dear and assimilate us into itself. And I say to thee, this shall not come to pass! Aiur shall not fall!"
Voiced by: Michael Gough (Starcraft) and Michael Dorn (Starcraft II)

The initial Executor (Protoss military commander) of Starcraft I before being replaced by Artanis, Tassadar was ordered to raze a bunch of Terran planets infested with Zerg. He tried to kill the Zerg while sparing the Terrans, but while his actions were largely successful (though he left alive one person he'd later regret) he fell in with the dark templar, who contrary to their names were not at all evil. Tassadar realized this, and being about the only person in existence to realize the true threat the Zerg posed, enlisted the dark templar's help to defeat the Zerg, with the help of Jim Raynor. In the climax of the original Starcraft, he crashes his command ship, the Gantrithor, into the Overmind, manifesting dark templar energies into the hull of the ship to destroy it in a Heroic Sacrifice. 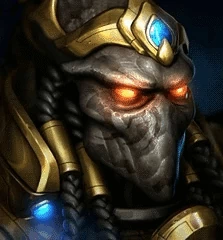 A Meaningful Name if ever there was one.
"I fear no enemy, for the Khala is my strength!"
Voiced by: Bill Roper

Artanis' Number Two during his time as an Executor on Aiur, Fenix was a Blood Knight warrior who loved the honor and rush of battle, and advocated an alliance with the now-rogue Tassadar, having been his best friend. However, once the initial attack on the Cerebrates failed due to a lack of information, the Protoss high council turned against Tassadar. Not that it mattered for Fenix, because he was shortly thereafter killed by pack of Hydralisks... or was he? He came back, his mortally wounded body encased in a Dragoon exo-skeleton walker, helping in the assault against the Zerg when Tassadar returned to Aiur.

In Brood War he was left on Aiur with Raynor, and the two became close comrades in spite of being of different races. The two allied with Kerrigan against the UED, but once she shattered their main forces on Braxis and Korhal, Kerrigan betrayed them and killed Fenix. 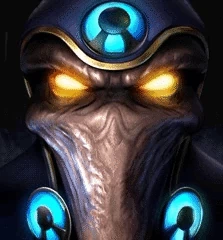 Obstructive Bureaucrat, meet Scary Dogmatic Aliens.
"I have been sent by the Conclave to serve and counsel you."
Voiced by: Paul Eiding

Aldaris was Artanis' original commander during Starcraft until he allied with Tassadar. Aldaris, too set in his ways to accept that the dark templar could be anything except the most absolute of corrupting evils, refused to help them and indeed kidnapped Tassadar to stand trial for treason. In the end of Starcraft I, as Tassadar, Raynor, Zeratul, and Fenix prepared for their attack on the Overmind, Aldaris wished them luck. In Brood War, Aldaris is the only surviving member of the Protoss Conclave, the rest having been om-nom-nommed by the Zerg. He opposes everything having to do with allying with Kerrigan, and then stages an unsuccessful coup in the Protoss ranks when he realizes he was actually right instead of just whiny. He was the only Protoss to realize Kerrigan was mind-controlling Raszagal until she revealed it herself. She struck him down before he could tell Zeratul ("helped" by the fact that Aldaris babbled like a deranged zealot instead of coming out with the truth right away).

Mojo
Voiced by: None. (by Glenn Stafford as a unit)

A Protoss Praetor in charge of an expeditionary fleet captured by Alan Schezar, he contacted Alpha Squadron's forces during their pursuit of Schezar to request their aid. Canonically they aided him and Mojo's fleet helped them defeat Schezar's forces.

A protoss Preserver, containing all the memories of past protoss, she is one of a few left and was hunted down by Ulrezaj. Wounded and carrying valuable information, she preserved herself in stasis to transfer herself into the mind of a protoss, if they ever found her. Due to a flash of insight on their language, though, Jake found her first, and Zamara's consciousness entered his mind.

A member of the Shelak Tribe during the period of civil war called the Aeon of Strife, he yearns to find more in life than just killing other protoss and guarding a few mysterious xel'naga relics they can't understand. He gets his wish when he rediscovers the lost communal link link known as the Khala and reunites the race, earning his more-well known moniker "Khas" ("He Who Brings Order"), and being immortalized in Protoss history.

Savassan's apprentice of sorts, and the only one of the Shelak Tribe who is able to understand his teachings.

The templar who, long ago in Aiur's history, was assigned to track down and exterminate protoss who had begun to reject the Khala. When he discovered that contrary to the Conclave's propaganda, the rogues were not evil or anarchistic, he instead taught them to hide themselves using psionic powers coming from a place other than the Khala, creating the band that would become known as the dark templar.

Adun's advisor, an old warrior that questions his commander's judgment but does see the value of his beliefs.

The head of the Conclave during the hunt for the dark templar, he wishes to see them wiped out for fear dissention from the Khala could cause another Aeon of Strife.