The protagonist of the series. After discovering her potential and love for karuta by the New Transfer Student Arata, she becomes dedicated to the sport and starts a karuta club with her Childhood Friend Taichi in their first year of high school. Starts off as a B-Class karuta player before moving to A-Class at the beginning of the series, she aspires to one day become the Queen of Karuta. Profoundly beautiful, but tomboyish to a fault, Chihaya becomes the captain of the school's karuta team.

The Childhood Friend of his crush Chihaya and (begrudgingly) Arata, he reunites with the former when he starts attending her high school. Has also played karuta since he was a kid and is B-Class when the series begins, determined to become A-Class. Handsome, affluent and popular at school, Taichi supports Chihaya as president of the karuta club, though he is a skilled player who is noted to be unfortunately prone to bad luck.
Arata Wataya
Voiced by: Yoshimasa Hosoya (JP), Yuka Terasaki (JP, young), Blake Shepard (EN), Shannon Emerick (EN, young)
Portrayed by: Mackenyu, Amon Kabe (young)

Transfers to Chihaya and Taichi's elementary school and gets picked on nearly right away. The grandson of the eternal master Hajime Wataya, he is a karuta prodigy and was the one who got Chihaya and eventually Taichi hooked on the game. He moved back to Fukui and continued to play until he was promoted to A-Class at the same time his sick grandfather passed away. He stopped playing ever since... until he suddenly runs into Chihaya and Taichi again.

The first member Chihaya and Taichi recruit into the karuta club. Is passionate about traditional clothing and classical poetry, which is what motivated her to join the club in the first place.
Tsutomu Komano
Voiced by: Tsubasa Yonaga (JP), Bryson Baugus (EN)
Portrayed by: Yuki Morinaga

The second member recruited into the karuta club. A top student who, prior to joining, dedicates all his time to studying since he feels that's all he can do.

The third member to join the karuta club. Chihaya and Taichi first met him as kids in a karuta tournament. He was also Arata's rival at the time, but turned to tennis after losing a tournament final to him. Has joined the tennis club when Chihaya first tries to recruit him, but he's shown to not have lost his skills nor passion for karuta.

A freshman who joins the Karuta club in order to get close to Taichi.

Another freshman and new member of the Karuta club. Somewhat experienced in karuta to some degree, since back in his hometown Hokkaido he played Shimonoku (second verse) karuta.

A cocky Class-A karuta player who is in charge of his karuta team prior to leaving. Noted to be a sadist in the way he plays.

A B-Class karuta player whom Chihaya, Taichi and Arata encountered as kids when they first joined the Shiranami karuta society. Helps his team using his Hyotarot (or Retarot) cards. 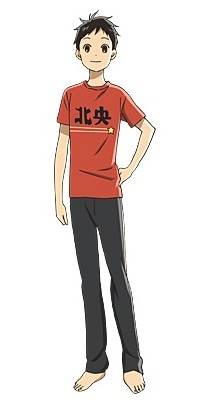 A Class-A player who becomes the ace after Sudo leaves.

The head of Shiranami Society and is also a doctor. He's Chihaya and Taichi's karuta mentor who always looks out for them and offers them advice. He also used to coach Arata when he lived in Tokyo.

Hiroshi Tsuboguchi is karuta Class A player, and the ace player of Shiranami Karuta Society. 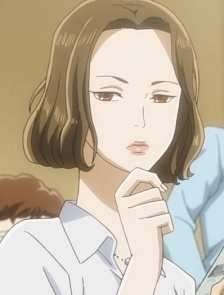 The coach of the Fujisaki Karuta club. She played for the title of Queen five times, though she never won. 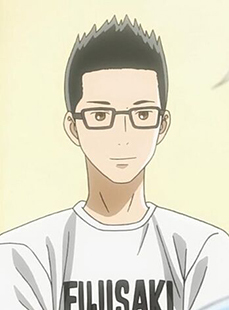 The captain of the Fujisaki team and an A Class player. Serious-looking and even perceived by Taichi as similar to Arata, but his personality is in reality quite different. A third year student.

Another Class A player, a third-year and a very self-aware Bishounen.

A second year student and the granddaughter of Certified Karuta reader Kyouko Yamashiro. 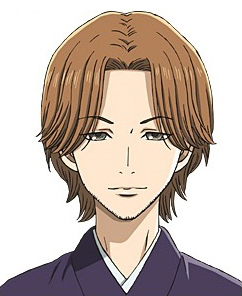 A college student and the current Master of karuta. He's been holding this title 4 years in a row.
Megumu Ohsaka
Voiced by: Sachi Matsumoto (JP), Allison Sumrall (EN)

A student at the First Akashi's Girls High School and the captain of the school's Karuta team.
Haruka Inokuma
Voiced by: Maaya Sakamoto (JP) 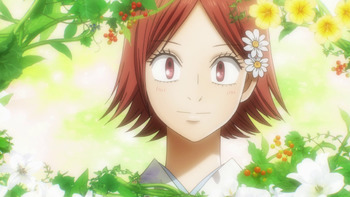 A former Queen returning to Karuta, who defended her title four times in the past, having been forced to abandon the game when she had two maternity leaves. She is the rival and personal friend of Midori Sakurazawa, her challenger for the four titles. 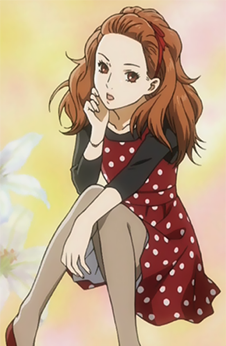 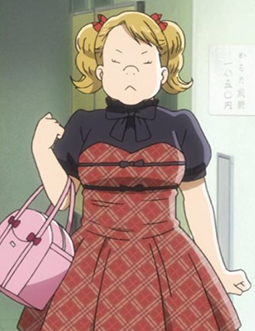