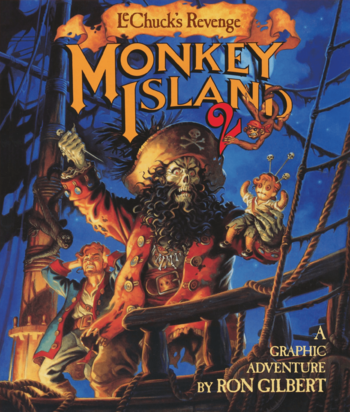 "I thought I'd killed the Ghost Pirate LeChuck for good. Wrong. How many times can that bloated old fool die? Other pirates tell me there's no escape. Legend has it that the treasure of Big Whoop holds the key to great power... I must find it before LeChuck finds me."
— Excerpted from The Memoirs of Guybrush Threepwood: The Monkey Island Years
Advertisement:

Monkey Island 2: LeChuck's Revenge is the second game in the Monkey Island series, released in 1991. It takes place some time after the first. Guybrush is starting to have trouble getting other pirates to listen to his stories about the last game, so he decides to actually do something piratey that he can make a new story out of. His quest this time is to find the four pieces to a treasure map leading to a fabulous treasure known only as "Big Whoop". As the title of the game indicates, however, Guybrush's old foe LeChuck returns from the dead once more (this time as a zombie), and tries to get his revenge on Guybrush.

This marks the end of the old-school, Ron Gilbert Monkey Islands, as he left LucasArts the year after the release, with co-writer and designer Dave Grossman following in 1994, and the following installments in the series were, until Tales of Monkey Island came along, made without input from Gilbert or any of the other original writers. This game is given the twist-ending Gilbert wanted to put in the original game, an ending which divides the fanbase like nothing else in the entire canon.

Finally followed up by Ron Gilbert's Return to Monkey Island in September 2022, which serves primarily as a sequel to LeChuck’s Revenge while maintaining some continuity with the three games made in the interim.

A "Special Edition" Updated Re-release/remake was released in the summer of 2010, with redrawn artwork, voice acting from the cast of The Curse of Monkey Island, and creator commentary from Tim Schafer, Ron Gilbert and David Grossman.