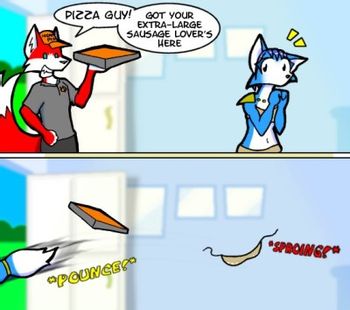 If pornography is to be believed, no profession results in higher rates of sexual promiscuity than being a pizza delivery boy. Any mention of pizza in a pornographic movie will result in a pizza boy having sex. You'd be surprised that there aren't people clamoring to sign up with Pizza Hut or Domino's just for the tips alone. Expect to hear some really cheesy dialogue about "sausage" or "extra meat-lovers".

This trope doesn't apply to just pizza boys, but to any profession which provides services at the house of a client. It gives viewers the thrill of supposedly watching anonymous, spur-of-the-moment sex without a production team having to use any other sets than a living room or bedroom where the "total strangers" meet. Plumbers are frequent candidates, complete with bad "cleaning out your pipes" jokes. Cable television installers are also portrayed as being sex-crazed, as their job will invariably require some screwing, and drills with unusually large bits.

It is never explained how the delivery person avoids getting into trouble with their boss back at the office for taking so long to make a delivery, or how they will explain the lack of tangible payment they collected for the goods they dropped off.

Incidentally, in actual pornography, pizza delivery (and cable repair, etc.) girls are starting to become popular, possibly due to overexposure (as it were) of the male sex for this.

If the client is married, see Cheating with the Milkman. For the video game equivalent, see Excuse Plot. Not to be confused with a Delivery Guy Infiltration (though it can easily happen in the work).

Elliot, the contractor Laura Halpren hired to remodel her kitchen treats her to one of those "extra perks" in the shower.

Elliot, the contractor Laura Halpren hired to remodel her kitchen treats her to one of those "extra perks" in the shower.