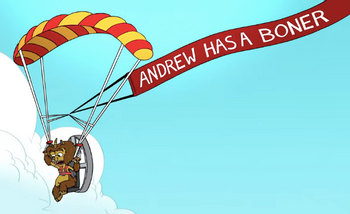 "THOSE BOOBS! THEY'RE TOO AWESOME! WATCH OUT! I'M COMING IN HOT! REAL HOT! AAGH I'M GOING DOWN!"
Being an animated teen sex comedy means there's not going to be any shortage of Crosses the Line Twice.
Advertisement:

open/close all folders
In General
Season 1

Requiem for a Wet Dream

What Is It About Boobs?

Dark Side of the Boob

The Department of Puberty

Girls Are Angry Too

How To Have An Orgasm

Disclosure the Movie: The Musical!

The Hugest Period Ever

What Are You Gonna Do?

I F**king Hate You

Twenty Two And You