After Star Boy left Xanthu, the Tribune which rules the planet decided the world needed a new champion, and chose former child actor and amateur athlete Marak Russen. By altering his genes and flying him through the tail of a comet, they hoped to recreate the events that gave Star Boy temporary Kryptonian-esque powers, but on a permanent basis. Fluctuations within the comet, however, caused Russen to develop a set of different, but quite sufficient nuclear-based abilities.

Following years as the Champion of Xanthu, Atmos made a play to join the Legion of Super-Heroes after Star Boy left the organization, partially so that he could contact the bereft Dream Girl, who had been effectively dumped and abandoned by her lover Star Boy, and rekindle the relationship they'd once had. After the Legion turned him down due to his imperious attitude, he returned to Xanthu with Dream Girl by his side.During the Magic War, Dream Girl came to the conclusion that Atmos had been controlling her mind, and socked him while his force field was down.

Atmos joined the Legion properly during the Five Years Later storyline/continuity (which would seem to indicate that he was proven innocent of DG's accusation or otherwise forgiven) but left as Earthgov (controlled by the Dominators) became increasingly anti-Legion, got captured by the Dominators, and was killed as a test of their Hero Killer android B.I.O.N. 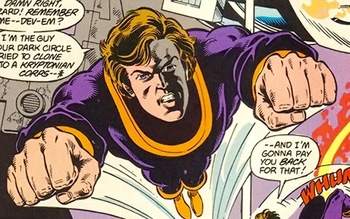 Youth from the planet Krypton who was on his way to becoming a serious criminal but eventually reformed. He is also one of Krypton's only survivors of its destruction. He is a member of the Interstellar Counter Intelligence Corps and ally of the Legion of Superheroes.

Rond Vidar is one of only two Green Lanterns active in the 31st century.

Heroes of Lallor
The Heroes of Lallor were a group of five teens from the planet Lallor who gained powers after exposure to atomic fallout. They were exiled from their dictatorial homeworld and made their way to earth.

AKA: Ilshu Nor
Homeworld: Lallor
Abilities: Can change into animals, and act as alpha. 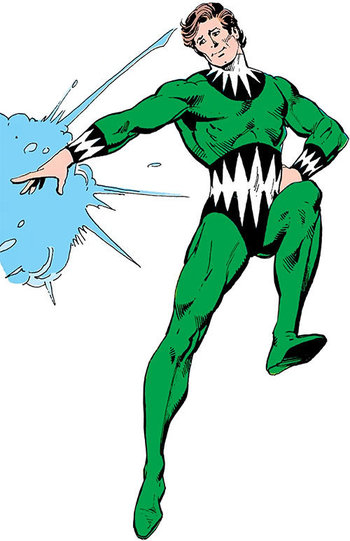 AKA: Tal Nahii
Homeworld: Lallor
Abilities: Ability to turn herself into any kind of gas 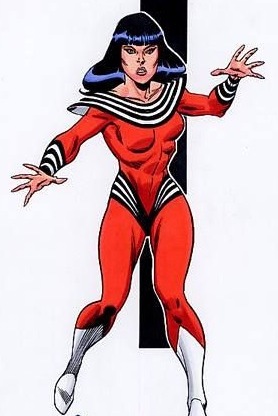 Laurel Kent is a candidate for membership in the Legion of Super-Heroes, and a direct descendant of Superman.

Although her sole power was redundant several times over within the Legion ranks, she underwent training at the Legion Academy in order to refine her skills so that she could become a super-heroine on her own.

Post-Crisis, Laurel was revealed to be a Manhunter android, created in the 20th Century to act as a "sleeper agent" awaiting the advent of the "New Guardians"—humans chosen by the Oan Guardians of the Universe who had the evolutionary potential to succeed them and start a new civilization of Guardians originating from Earth. Her duty was to be a sleeper agent on Earth for a thousand years and emerge to destroy the New Guardians and their emergent civilization if they should come to exist in the 30th Century.

Everything she'd done up 'til this point was revealed to be a way to use the resources of the Legion to hunt down these nascent "Immortals" as she called them, and she used the Legion computers to cross-correlate genetic and genealogical information in order to track down where the Immortals were most likely to develop.

Upon discovering the location (namely the Grand Canyon area), Laurel dropped all pretense of humanity, explained her mission, and barreled through the Legion's attempts to stop her. Unable to beat her with force, the Legionnaires secretly set up a city based upon Oan architecture and tricked her into believing that the Immortal civilization had already developed and left Earth to take the Guardian's place in the stars.

Seeing no trace of the Immortals she was meant to destroy, Laurel believed she'd failed her mission due to being programmed to wait too long. Asking to Legion to bear witness that she'd done all she could to fulfill her mission and to give her regards if they ever met the Immortals themselves, she self-destructed.

However, some time later a familiar looking woman named Elna (a name Laurel once used) Kent emerged as Superwoman raising some doubt on whether or not Laurel actually was a Manhunter the whole time or if the Manhunter android tried to steal her identity. 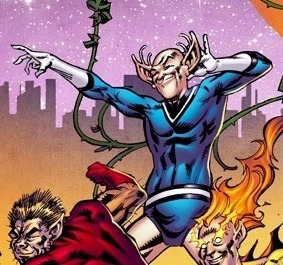 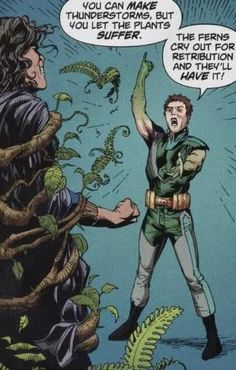 AKA: Ral Benem
Homeworld: Mardru
Abilities: Manipulates plant growth; claims he can talk to them, which he cannot 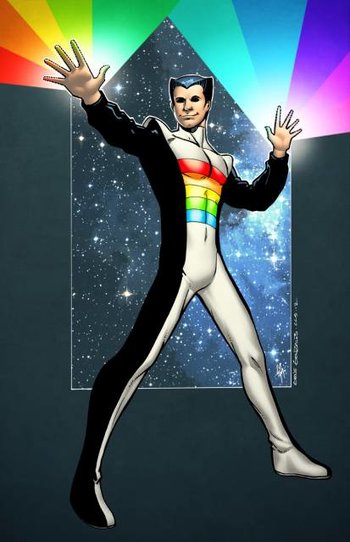 AKA: Ulu Vakk
Homeworld: Lupra
Abilities: Can change color of any object 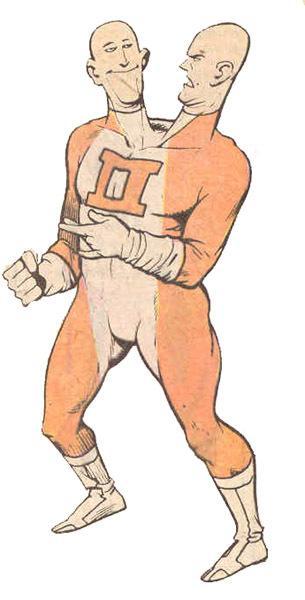 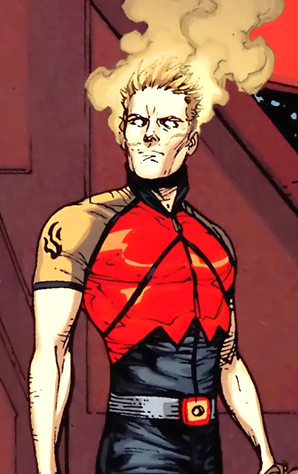 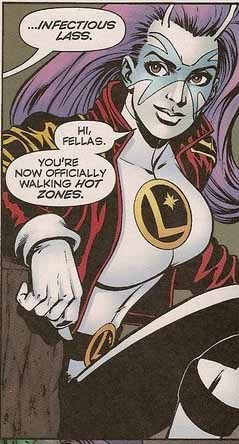 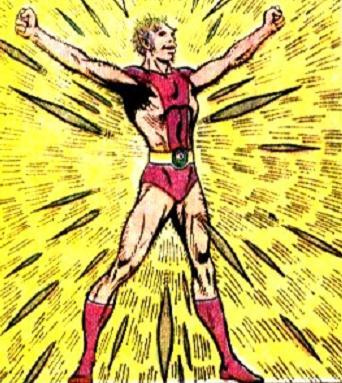 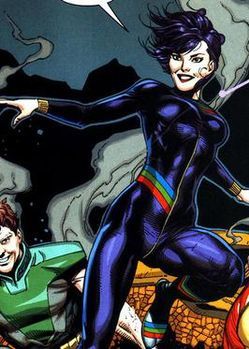 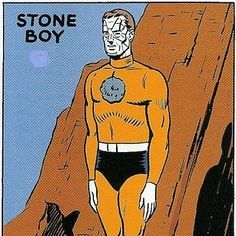 AKA: Dag Wentim
Homeworld: Zwen
Abilities: Able to transform his body to stone, but forced to remain inanimate

Members who went on to join the Legion: 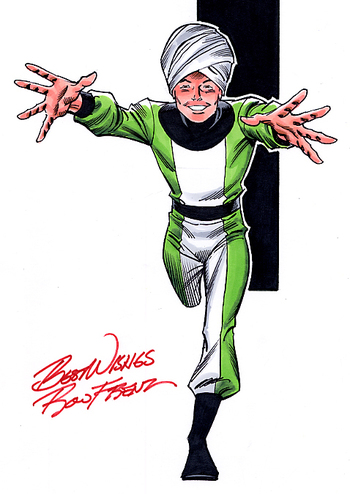 The Tornado Twins
AKA: Don and Dawn Allen
Homeworld: Earth
Abilities: Pre-boot: Temporary super-speed and associated powers. Reboot: Partial super-speed and associated powers.
The Uncanny Amazers (Postboot)
The Wanderers (Preboot)
The Wanderers originally appeared as another team of adventurers predating the Legion, who were turned temporarily evil by a Negative Space Wedgie to set up a Let's You and Him Fight plot. In the late Eighties, Doug Moench wrote a Legion spin-off title starring them — or at least clones of them created by a rogue Controller. The clones were created with enhanced powers and drastically different appearances. 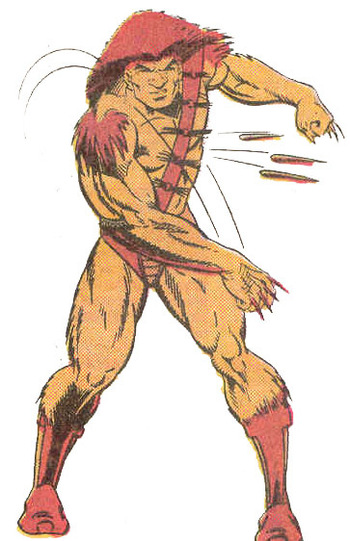 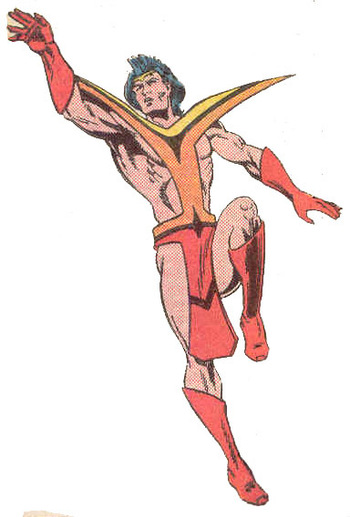 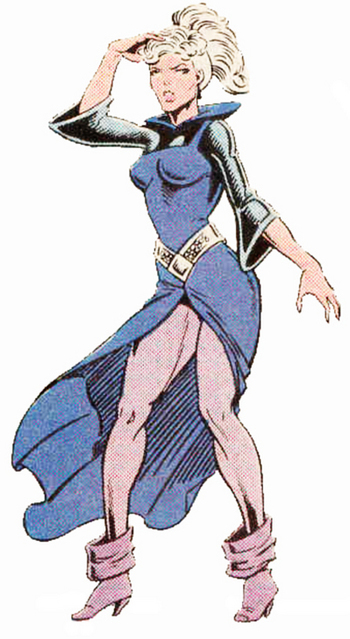 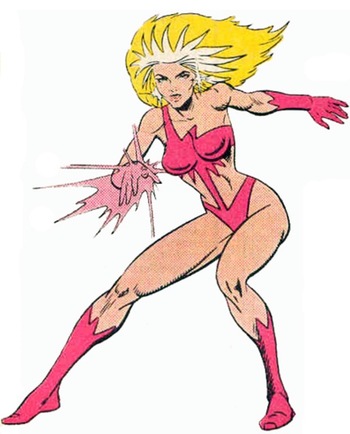 The Wanderers (Threeboot)
In spite of their name, they're a combination of the Legion of Supervillains, the Substitute Heroes, and miscellaneous Legion washouts and associated heroes.)
The WorkForce (Postboot)

Members who joined or were originally part of the Legion:

(defected from the Legion; later went back, see Legion Of Super Heroes Founders)