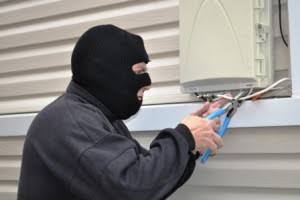 Dick: It sounded as though somebody snipped the wire.
Dora: Really? What did it sound like?
Dick: "Snip".
— Murder by Death

Sometimes, the villains knows what the heroes are planning to do and where they will go. In this case, said villain knows when they will have access to a phone. So, to avoid having the police interfere, they will cut the phone line, often offscreen.

Frequently a Horror or a Mystery movie trope. Since cell phones have made this largely obsolete, this is generally replaced by Cell Phones Are Useless in modern works.