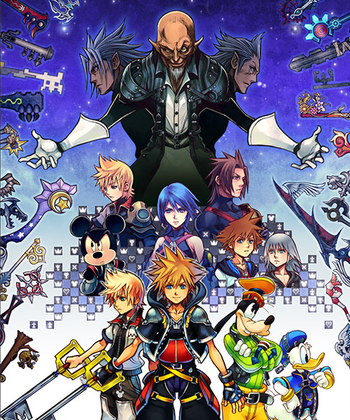 So, a Square Enix developer and a Disney executive walk into an elevator

Kingdom Hearts is a series of fantasy Action JRPG games, co-produced by Squaresoft (now Square Enix) and Disney, directed by Final Fantasy character designer Tetsuya Nomura, and starring characters from both companies. It's basically the darkness-lightingly popular Final Fantasy series meets Disney (along with some other Square Enix properties later on). The series is well-known for its incredibly bizarre premise and increasingly complicated plot, not to mention its increasingly absurd sequel subtitles.

open/close all folders
Advertisement:
Phase One: The Dark Seeker Saga
The first phase of games detail Sora and friends' struggle against a man known as Xehanort, who wishes to unlock the secrets of Kingdom Hearts and use it for his own nefarious purposes. Detailed below is the order the games are released in, and should be played in.

The first three games, released from 2002-2005, tell a trilogy in which Sora discovers his ability to wield the Keyblade and searches for his missing friends, battling the forces of darkness and exploring the Disney worlds along the way. It would not be until the third game, Kingdom Hearts II, that it was made clear the source of the evils plaguing the worlds was Xehanort, a dark Keyblade Master who was eventually established as the Big Bad of the Dark Seeker Saga.

The final set of games in the Dark Seeker Saga, released between 2012 and 2019, gradually returned to consoles as it saw Sora, Riku, and their friends learn of the true scope of Xehanort's ambitions for Kingdom Hearts, and thus the heroes prepared for a climactic final battle foretold in ancient times as they mustered any hero of light they could against Xehanort and his XIII Seekers of Darkness. This final set of games also gave players a deep dive into the ancient lore of the Kingdom Hearts universe as it planted seeds for the future of the series.
Phase Two: The Lost Master Arc
The second phase of games of the series began in 2020. After the events of III, the heroes pick up the pieces and search for answers about the questions they've been left with as the schemes of an ancient master with a mysterious agenda come to light.
χ series
A series of games release for mobile phone (and PC for the original KHχ), that act as a prequel for the franchise as a whole and are not considered part of neither of the two major arcs, though elements of them start to become relevant in the transition between the two arcs.
Remakes and re-releases
Several games of the series have received updated releases including additional content, and as the series has gone on and across several different platforms, the 2010's saw cohesive efforts to bring all of the games together into organized collections.
Adaptations
The franchise has had several manga and novels published.

The first four games and Kingdom Hearts III have been adapted to manga by Shiro Amano. While the manga itself does have some dramatic moments, it is mainly an abridged adaptation of the games with a lot of humor, typical of Japanese comedy in other manga.

Every game in the Kingdom Hearts franchise has a results screen appear after the credits showing you what you accomplished throughout the game. II's screen in particular shows you how much of Jiminy's Journal you completed, how many times Mickey bailed you out and which Summon you used the most, among other things.

To Find Is To Lose

Every game in the Kingdom Hearts franchise has a results screen appear after the credits showing you what you accomplished throughout the game. II's screen in particular shows you how much of Jiminy's Journal you completed, how many times Mickey bailed you out and which Summon you used the most, among other things.

To Find Is To Lose