Characters / The Wheel Of Time The White Tower

Main Character Index | Ta'veren | Others from the Two Rivers | Royal Line of Andor | The White Tower | The Black Tower | Independent Characters | The Aiel | The Whitecloaks | Seanchan | The Heroes of the Horn | The Shadow & Darkfriends
“The White Tower stands, and we shall stand with it."
open/close all folders
Advertisement:
Aes Sedai (In General)
"I vow that I will speak no word that is not true."
"I vow that I will make no weapon for one man to kill another."
"I vow that I will never use the One Power as a weapon except against Darkfriends and Shadowspawn, or in the last extreme of defending my life or that of my Warder or of another sister."

Aes Sedai are the Witch Species of the story. Remember how male channelers inevitably go mad and die? That means only women can safely channel, and do so under the aegis of the Aes Sedai. They run a Wizarding School, the "White Tower," in the city of Tar Valon, and have representatives all over the world. While they aren't technically a nation, they are still a force to be reckoned with politically and militarily, and their leader, "The Amyrlin Seat," is certainly the most powerful person on the continent.

Aes Sedai affiliate themselves into seven sub-families, or "Ajah"s:

The White Tower runs a pretty comprehensive canvassing program over the continent, bringing in girls who need to learn to channel and sending out Reds to handle the boys. Their senatorial body, the "Hall of the Tower," consists of three "Sitters" from each of the seven Ajahs (any number of whom could, of course, also be Black), and elects the Amyrlin Seat by democratic process. The Amyrlin forswears her Ajah; the same is not so of her Number Two, the "Keeper of the Chronicles," who comes from the same Ajah as the Amyrlin. Both traditionally serve for life, or unless deposed by the Hall—something that has only happened four times in the Tower's history.

Warders (In General)
A "Warder" is a warrior, typically a man, who has sworn service to an Aes Sedai. They are typically confidantes, bodyguards and accomplices, occasionally lovers and/or husbands. A Warder is typically either trained in combat at the White Tower or was already really good to begin with. They are attached to their Aes Sedai via the "Warder bond," a Psychic Link that verges into Synchronization. The vast majority of Warders are men; the only Aes Sedai (Elayne Trakand) with a female Warder (Birgitte Silverbow) has managed to keep that affiliation secret for a long time. Visually, Warders are known for their cloaks, which have chameleonic properties.
Moiraine Damodred 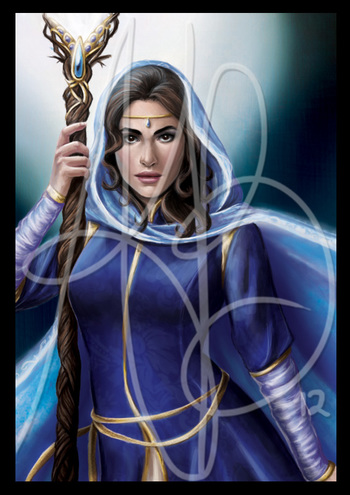 "The Wheel weaves as the Wheel wills, and we are only the thread of the Pattern."

An Aes Sedai of the Blue Ajah, Moiraine starts the series off as The Mentor, parading into the Doomed Hometown and effortlessly singling out the main characters. The fact that Rand & Co are somewhat Genre Savvy to her doesn't help a bit — but in any case, she's not here to beguile them, but rather to protect them. Eighteen years ago, the Dragon was reborn. Moiraine has been searching for him ever since, and has finally narrowed it down to one of three boys in Emond's Field. The fact that the Big Bad sends The Usual Adversaries in just confirms it. So Moiraine gets them out of there, with an express intent to guide the Dragon Reborn, teach him, and protect him until it's time to fight the Final Boss — and, also, to figure out which of the three he is... 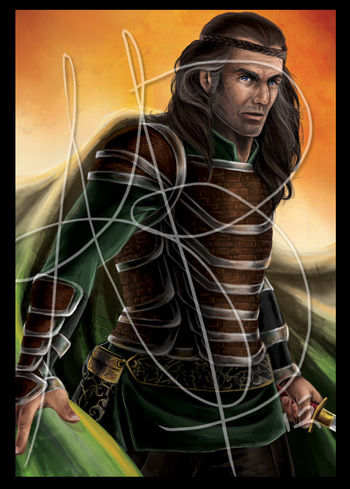 Introduced to the story merely as Moiraine's Warder, a bodyguard with a Psychic Link and some other sundry skills, Lan is later revealed to be the Last of His Kind: he is the crown prince and only surviving citizen of the nation of Malkier, which was overrun by The Usual Adversaries and the Garden of Evil when he was still a babe at the breast. Condemned to wage a one-man war against the Shadow, Moiraine managed to distract him by dangling that whole "Save This Person, Save the World" thing in front of him, and he has protected her ever since. 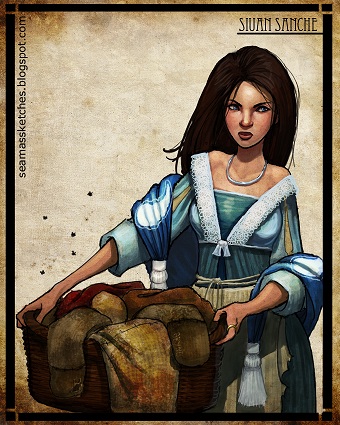 "Well, this is a pot of fisherman's stew made only with the heads."

Introduced into the story as The Watcher of the Seals, The Flame of Tar Valon, The Amyrlin Seat. What this means is that she is the elected leader of the Aes Sedai and, as such, basically the most powerful person alive. She and Moiraine went to school together and are co-conspirators in the "Save the Dragon, Save the World" plan. 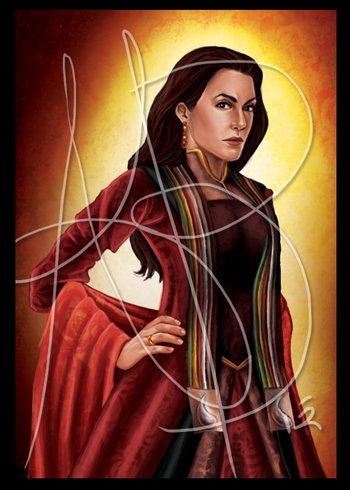 "This I Foretell, and swear under the Light that I can say no clearer. From this day Andor marches toward pain and division. The Shadow has yet to darken to its blackest, and I cannot see if the light will come after. Where the world has wept one tear, it will weep thousands. This I Foretell."

An Aes Sedai of the Red Ajah, formerly the adviser to Queen Morgase of Andor, and a monumental bitch with delusions of grandeur. Was Accepted when Siuan and Moiraine were novices, and an Aes Sedai for five years when they were Accepted. Always disliked them, but also did her best to ensure they would both become Aes Sedai since they were both so strong in the One Power and the White Tower would need them for the Last Battle. Has the Foretelling. Attached herself to Morgase because she (secretly) Foretold the Trakand line would be instrumental in defeating the Dark One. Eventually, she instigated a coup (encouraged by Alviarin and, though she didn't know it, Mesaana) to tear down Siuan Sanche and install herself as the Amyrlin Seat. From there she proceeded to become an arrogant, vain, petty tyrant.

A cool member of the White Ajah and one of the first sisters to support Elaida's coup; unusually, she is made Elaida's Keeper afterwards despite not hailing from the same Ajah as her Amyrlin. She's actually the head of the Supreme Council of the Black Ajah, taking orders from Mesaana herself, and plays a key role in the breaking of the Tower. She eventually becomes one of the leading Dreadlords during the Last Battle.

She was Galina Casban, Highest of the Red Ajah, who sat on the Supreme Council of the Black Ajah. note and she was going to be Therava's plaything for the rest of her life. She was Therava's little Lina.

The Head of the Red Ajah and one of the two second in commands of the Black Ajah. Elaida puts her in charge of the expedition to capture Rand. This fails and she is captured by the Shaido Aiel, tortured, and made to swear an Oath of obedience on a second Oath Rod and ultimately broken. 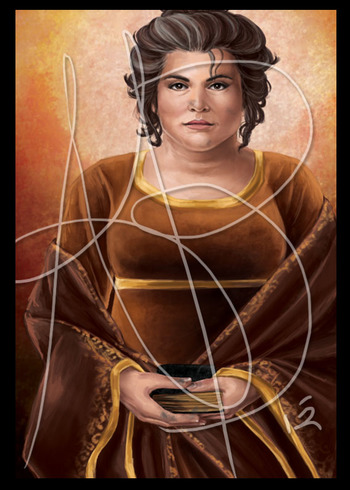 "Every woman in the Brown, seeks to produce something lasting. Research or study that will be meaningful. Others often accuse us of ignoring the world around us. They think we only look backward. Well, that is inaccurate. If we are distracted, it is because we look forward, towards those who will come. And the information, the knowledge we gather... we leave it for them."

A dreamy Brown Ajah who is very interested in books. Is smarter and more observant than she appears. Helps Perrin in the Two Rivers, then goes off to advise Rand. Later returns to the White Tower where she kills herself to betray the Black Ajah. 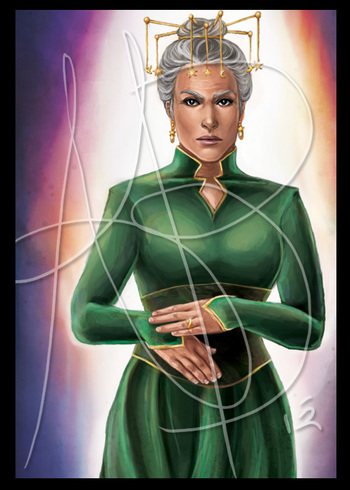 One of the oldest and most respected Aes Sedai alive (possibly the most in both categories), Cadsuane is something of a living legend for her adventures, the number of male channelers she's managed to deal with, and for being one of the Most Triumphant Examples of an Iron Lady to walk the halls of fiction. She appears out of nowhere (that is, Ghealdan) in the seventh book to add herself to the growing list of hangers-on around Rand, and the two have a very contentious relationship.

Despite the fact that everything has been said about her that ever will be, Cadsuane is still a rather opaque character. She plays things close to the vest and rarely needs help, simply using her forceful personality to bully people around. Her primary goal seems to have been simply to make sure Rand didn't become too much of a Determinator, but who knows what else she was up to.

Introduced as Siuan Sanche's Keeper, also of the Blue Ajah, very competent and in control, and also runs the eyes-and-ears within the White Tower.

A century-old Kandori Red, Pevara serves as a look into a somewhat more reasonable Red.

Liandrin is a doll-like Aes Sedai of the Red Ajah with a mean streak. She was raised in a poor family, and grew up resenting those with power and status, but also lusted after it. She's soon revealed to be Black Ajah, and is the first major Black sister in the series.

An Aes Sedai of the Blue Ajah and an old friend of Moiraine and Siuan. She's the Mistress of Novices as the series begins, but leaves the Tower after Elaida's takeover and takes a leadership position among the rebels. She becomes Keeper of the Chronicles when Egwene is named their new Amyrlin. It's eventually revealed that Sheriam is Black Ajah.

Romanda & Lelaine
Romanda Cassin and Lelaine Akashi are long-time Aes Sedai of the Yellow and Blue Ajah, respectively. Although they thoroughly dislike one another, they are frequently put in situations where they need to work together. They side with the rebels during the Aes Sedai civil war and vie for favour with the new Amyrlin.
Teslyn & Joline
Teslyn Baradon & Joline Maza are a pair of Aes Sedai who side with Elaida during the civil war arc. They try and fail to bring Elayne and Nynaeve to heel, and end up stranded in Ebou Dar when the Seanchan take over. They eventually find themselves tied to Mat, and Hilarity Ensues.