Characters / The Wheel Of Time Seanchan

Main Character Index | Ta'veren | Others from the Two Rivers | Royal Line of Andor | The White Tower | The Black Tower | Independent Characters | The Aiel | The Whitecloaks | Seanchan | The Heroes of the Horn | The Shadow & Darkfriends
Almost a thousand years before events in the book, the legendary king Artur Hawkwing (the King Arthur/Alexander the Great of the WoT universe) united the Westlands under his empire. He sent his son with a huge contingent of troops across the Aryth Ocean to the west to discover new lands for his kingdom. They never returned and were thought to be lost at sea. Hawkwing's empire eventually crumbled after his death, resulting in the independent nations of the series' present. However, the expedition survived the journey and set up a new empire in the continent they discovered. Utilizing the strange creatures native to the land as well as mystical and fearsome devices for controling channelers, they conquered the indigenous peoples. Now, they are returning to the Westlands, determined to retake their homelands which they believe is their birthright and will stop at nothing to see the Hawkwing Empire restored.
open/close all folders 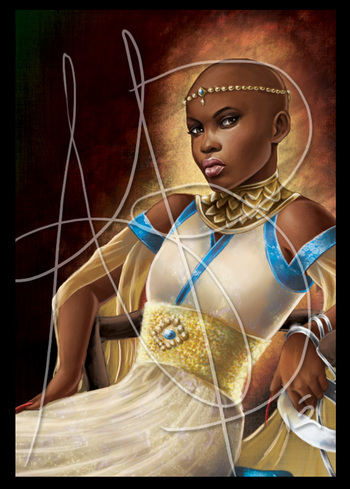 "Thank you." she told him politely. "I think I've heard enough" Ta'veren. Ridiculous. These people and their endless superstitions! A small brown bird, surely a finch, flew out of a tall oak and circled widdershins three times over Toy's head before flying on. She had found her omen. Stay close to Toy.

Tuon Athaem Kore Paendrag is the second and favorite daughter of the Empress of the Seanchan Empire. She comes to the Westlands to oversee the Return and ensure that the nations there are reunited under the Empire's rule. As such, she becomes another non-darkfriend antagonist to Rand. While she agrees that the world needs to be united when the Last Battle comes, it must be under Seanchan's banner and the Dragon Reborn must kneel to the Empress.

Egeanin Tamarath was a ship captain in the Seanchan fleet. After the fall of Falme, she is sent to the Westlands to help round up escaped sul'dam and damane. After realizing that much of what she knew about channelers was wrong, she suffers a crisis of conscience.

High Lady Suroth Sabelle Meldarath is in charge of securing a foothold in the Westlands to prepare for the return of the Seanchan. She is a cold and calculating individual who does not tolerate dissention amongst her ranks. Although she suffers a great defeat early on, her subsequent victories elsewhere lead some to believe that she may have secret ambitions inappropriate for her station. This is later verified as she is a Darkfriend under Semirhage with plans to make her the new Empress.

Tylee Khirgan is a Banner-General in the Seanchan army who later gets promoted to Lieutenant-General and of the low Blood.

Bakayar Mishima is a Captain in the Seanchan army under the command of Tylee Khirgan.

He always tried to be polite, even with men he was going to kill.

Karede is the leader of the Deathwatch Guard, the elite personal guards to the Seanchan Empress.

Selucia is a high ranking Seanchan da'covale and so'jhin to Tuon. She is described as Tuon's "shadow," her ever-present personal retainer.

High Lord Turak of House Aladon is the first commander of the Hailene meant to put a foothold in the Westlands ahead of the rest of the Seanchan, setting up a base in Falme. A collector of cuendillar and a blademaster, upon his death at the hands of Rand he is succeeded by Suroth.