Characters / The Wheel Of Time The Aiel

Main Character Index | Ta'veren | Others from the Two Rivers | Royal Line of Andor | The White Tower | The Black Tower | Independent Characters | The Aiel | The Whitecloaks | Seanchan | The Heroes of the Horn | The Shadow & Darkfriends
The Aiel (pronounced "eye-EEL") are a race that live in a Thirsty Desert, the "Aiel Waste," beyond the Spine of the World, separating the "Europe" of the main story from the "Asia" of Shara. Every single one of them is a Proud Warrior Race Guy. Ever since The Breaking of the World they have scratched out an existence in the Three-Fold Land (as they call it), waging constant wars amongst themselves for scarce resources which has forged them into a highly efficient fighting force, much a like a similar desert-dwelling people. They follow a complex set of rules and social mores, ji'e'toh ("Honor and Duty", or perhaps "Honor and Obligation"), that can be confusing to outsiders. The history of their people is a dark and shameful secret. Those aspiring to be Clan Chiefs or Wise Ones must travel to their abandoned holy city of Rhuidean in order to learn this history. Only about one in three return, the rest suffer from Go Mad from the Revelation.

The Aiel are divided into twelve clans, ruled by the clan chiefs, which form a semi-feudal heirarchy and further subdivide into "septs" and "holdings" (individual settlements). Aiel warriors also become members of one of the twelve warrior societies, such as "Far Dareis Mai" (the Maidens of the Spear), "Aethan Dor" (Red Shields) and more. While this can create conflicting loyalties, it also keeps the lines of diplomacy open at all times, because Aiel from the same society won't fight each other even if their clans are at war. Additionally, ji'e'toh includes Fictional Geneva Conventions, which an Aiel would rather die than break. Their prophecy speaks of a Car'a'carn, a chief of chiefs, He Who Comes With The Dawn, who will arise to lead them, but who will also destroy them. 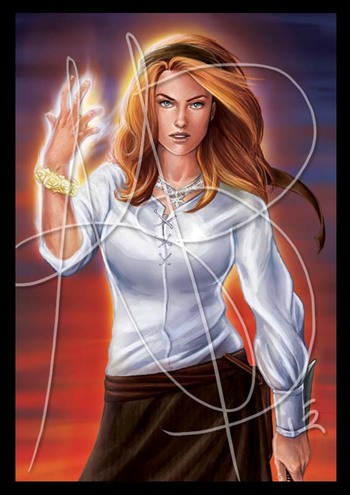 A Maiden of the Spear from the Nine Valleys sept of the Tardaad Aiel, Aviendha crosses into the "wetlands" in Book 3 along with a bunch of other Aiel in search of "He Who Comes With The Dawn." She becomes friends with Egwene, Nynaeve and Elayne and eventually joins forces with them. Later it is revealed that she too can channel, being roughly on par in power with Egwene and Elayne, with whom she eventually becomes BFF. When Elayne needs to go have her own campaign separate from Rand, she has Aviendha promise to watch out for him and make sure Rand stays loyal. The Aiel elders also assign her to be Rand's local guide, teaching him the customs and ways of his people. This causes a lot of conflict for Aviendha, because (according to one of Min's viewings) three women are fated fall in love with Rand, and Aviendha is one of them...

The Clan Chief of the Taardad Aiel and one of Rand's closest supporters. As is not unusual among the Aiel, he has two wives, Amys and Lian. He journeyed into the Westlands along with Aviendha in search of He Who Comes With The Dawn. Rhuarc is there when Rand first takes Callandor from the Stone of Tear and reveals that the Aiel are actually the fabled People of the Dragon.

"In my day, girls jumped when a Wise One said jump, and continued jumping until they were told to stop. As I am still alive, it is still my day. Need I make myself clearer?"

A Wise One from the Jarra sept. Sorilea is barely able to channel, but is one of the oldest and most revered Wise Ones. She has a formidable and forceful personality and can be quite frightening.

Leader of the Stone Dog society in Tear from the Imran sept of the Shaarad Aiel, Gaul acts as an important, but tertiary ally to the forces of the Dragon, mostly helping Perrin initially because he freed him from a cage early in the story.

Clan chief from the Domai Sept of the Shaido Aiel, Couladin is proclaimed the Cara'carn by the Shaido, leading to opposition between them and the rest of the Aiel.

A Jumai Aiel of the Shaido clan, one of the main non-darkfriend antagonists to Rand. She opposed recognition of Rand as Car'a'carn and supported her husband, Couladin, in his bid for power. Once he is defeated in battle she takes on the role as leader of the Shaido. She wages a war of pillage and plunder across the Westlands, taking many people prisoner as gai'shain, including Faile, which launches Perrin into his Roaring Rampage of Revenge.

A Wise One of the Shaido Aiel, she serves as the brains of Sevanna's Shaido following the death of Couladin.