Characters / The Wheel Of Time Heroes Of The Horn

Main Character Index | Ta'veren | Others from the Two Rivers | Royal Line of Andor | The White Tower | The Black Tower | Independent Characters | The Aiel | The Whitecloaks | Seanchan | The Heroes of the Horn | The Shadow & Darkfriends
"The Grave is no bar to my call. Let he who sounds me think not of glory, but of salvation."
— Inscriptions on the Horn of Valere

The Heroes of the Horn are the great heroes of the Pattern, bound to the Horn of Valere. They are summoned to battle for whoever blows the horn.

Better known in legend as Artur Hawkwing, he is the king referred to in many legends who united all the lands west of the Spine of the World as a single Empire. After uniting the lands, becoming High King, his subsequent death sparked the War of the Hundred Years. His sign was a golden hawk in flight.
Birgitte Silverbow 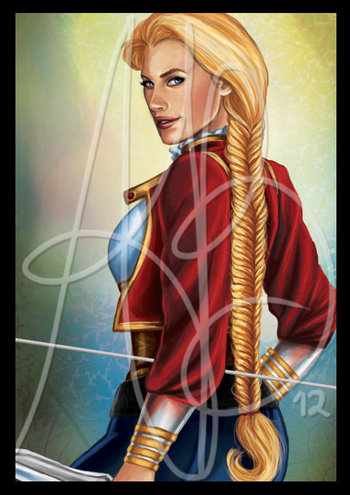 "I always say, if you must mount the gallows, give a jest to the crowd, a coin to the hangman, and make the drop with a smile on your lips"

Birgitte Silverbow is the heroine of many hundreds of gleeman's tales and legends. Like many of the great heroes of the Wheel of Time, she has been "spun out" into the Pattern many times, taking a different name but is always an archer and always falls for fellow Hero Gaidal Cain. When not being woven into the Pattern, or fighting in spectral form, she and all the other heroes of the Wheel reside in Tel'aran'rhiod; it is from here that she chooses to lend aid to Nynaeve and Elayne. 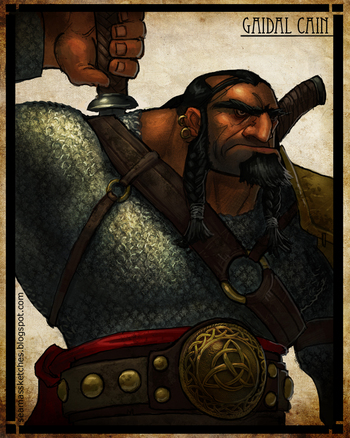 Gaidal Cain, being bound to the Wheel of Time, is periodically spun back into the pattern. His incarnations take various forms, all of which share common themes. Most notably, he fights with two swords, and stories of him also include Birgitte Silverbow, his fated lover.

Lews Therin Telamon was the incarnation of the Dragon during the War of Power. He was the leader of the forces of Light and was well-respected all over the world. He was as strong in the Power as it is possible to be and was the "First Among Servants." Though he was known for a long-running romantic liaison with Mierin Eronaile, the true love of his life, his eventual wife and the mother of his children, was Ilyena Moerelle Dalisar, called "Sunhair" for her red-and-gold tresses.

Lews Therin was responsible for ending the last War of Power, which he did with a back-up plan. The original thought was to create two obscenely powerful Amplifier Artifacts: the Choedan Kal, sa'angreal so potent that a man and a woman channeling through them could together unmake all creation. With such tools at their disposal, the relatively modest goal of erecting a barrier around the Bore could be achieved, one strong enough to contain the Dark One until the Bore itself could be closed. Unfortunately, the Choedan Kal could not be safely used without special "access key" ter'angreal, and these were seized (undoubtedly unknowingly) by the Shadow. Even worse, the women of the Hall of Servants refused to consider any other plan. This led Lews Therin to fish out his back-up plan: travel straight to the Bore and plug it with a makeshift cork anchored by seven pieces of cuendillar, thus Sealing Evil Back In Its Can. He and the Hundred Companions, men to a man, resolved to go.

Well, we know what happened next; and if Latra Posae Decume had not led the female Aes Sedai in their resistance, would saidar have been tainted as well? Rand's fight would be hopeless if so. In any case, after Lews Therin went insane, he killed all of his family and many friends, earning the epithet "Kinslayer." In the meanwhile, the seven seals themselves were passed to the next Amyrlin, which is why she's called "The Watcher of the Seals" today; it's something of a state secret, though, that they were lost during the Trolloc Wars and nobody's know where they've gotten to for about two thousand years.

Shivan the Hunter and Calian the Chooser

Shivan the Hunter and Calian the Chooser

Shivan and Calian are brother and sister Heroes, both of whom are only born at the end of an Age. Calian and Shivan respectively are assumed to be a parallels for Kali and Shiva of Hindu Mythology.

The wielder of the Sword of the Sun, Amaresu is a female Hero. Heavily implied to be Amaterasu of Japanese Shinto fame.

A golden-tongued peacemaker, this Hero is the Wheel of Time version of Saint Patrick.

Mikel of the Pure Heart

Mikel of the Pure Heart

Possibly the Wheel of Time version of Saint Michael, not much is known about this Hero besides his name.

The Wheel of Time parallel to Boadicea

Nothing is known about this Hero except his name.

A Hero with a notably very sharp eye despite his age, Rogosh Eagle-Eye served Artur Hawkwing's court in his most recent life.

A jovial hero who wields a hammer and spike. Possibly the Wheel of Time version of John Henry