Characters / The Camp Half-Blood Series: Servants of the Gods

Over the millennia, the gods have employed a great many servants, from monsters and automata to spirits and mortals. For the full list of characters, click here.

General
Mortals, demigods, nymphs, or other young women sworn to Artemis. They join the goddess on her hunts and are blessed with agelessness and divine hunting prowess so long as they remain perpetual maidens. They are currently led by Thalia Grace. 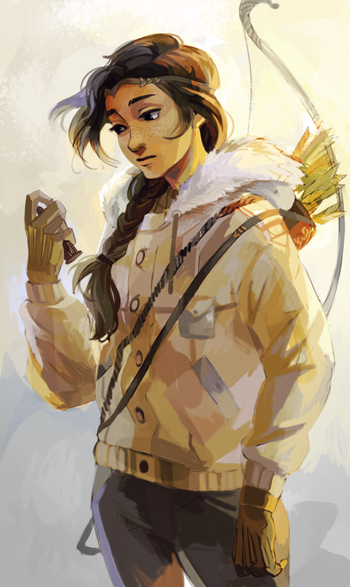 Daughter of Hades and Maria di Angelo, Bianca and her brother were born in the 1930s.
Phoebe
The best tracker and healer in "The Hunters of Artemis".
Thalia Grace 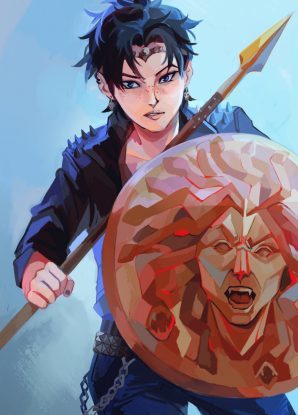 Daughter of Zeus and Beryl Grace, an eighties starlet. Her birth broke the pact the Big Three had made after World War II to never have children again. She ran away from her alcoholic mother when she was younger, met up with Luke and eventually Annabeth, and made her way with them to Camp Half-Blood. There they were overwhelmed by monsters and Thalia stayed behind to hold them off, dying in the process. Zeus turned her body into a pine tree.

Reyna Avila Ramirez-Arellano
Daughter of Bellona and a former praetor of Camp Jupiter. Her tropes can be found here.
Zoe Nightshade 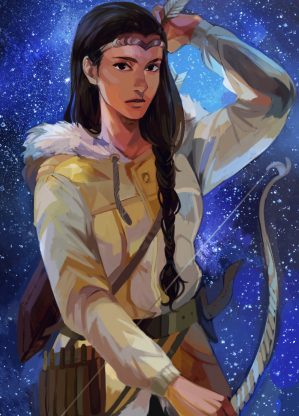 some caption text
A huntress of the goddess Artemis and her former lieutenant. One of Atlas's daughters, who was disowned by her family after helping Hercules steal from their apple tree. She is replaced by Thalia Grace after her death and turned into a constellation called "The Huntress" by Artemis.

General
The various creatures and beings Hades employs in the Underworld.
Iapetus/Bob
The Titan of Mortality and Lord of the West, mind-wiped by the waters of the Lethe into becoming a janitor for Hades named Bob. He first appears in The Demigod Files, supplementary material of the original series. He appears in the main series in The House of Hades.
Cerberus
The three headed hound who guards the gates of the Underworld.
Charon
The ferryman of the river Styx.
The Furies
A trio of vengeance spirits who serve as torturers, messengers, and enforcers for Hades.
Judges of the Dead
A group that judges the souls of mortals in particularly interesting cases. Three sit on the panel, rotated out from a larger pool.
Zombies
The butlers, cooks, gardeners, guards, warriors, and holders of basically every other job in the underworld.

General
Monsters get a bad rep for all the death they cause, but they're little more than tools. Those created by beings like Tartarus or Echidna tend to be vicious beasts, while those created by the gods... are about the same, but working for the gods.
Tyson 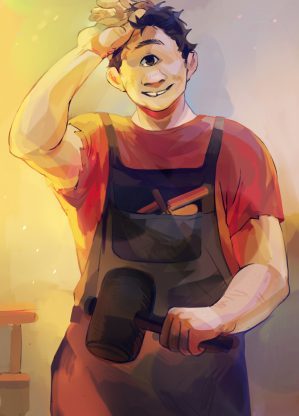 Tyson is first introduced as a school friend of Percy's, but he is later revealed to be a Cyclops - one-eyed children of Poseidon, therefore making him Percy's half-brother.
George and Martha
The snakes on Hermes's caduceus.
Cyclopses
One eyed giants who serve as blacksmiths and forgeworkers for the gods. While the Elder Cyclopes are loyal servants, the majority of cyclopes we see are of the southern and hyperborean varieties, so their tropes can be found on the Monsters page.
The Erymanthian Boar
A titanic boar that heeds the call of Pan.
Ladon
A hundred headed dragon set to guard the Apples of Immortality by Hera.
Ella 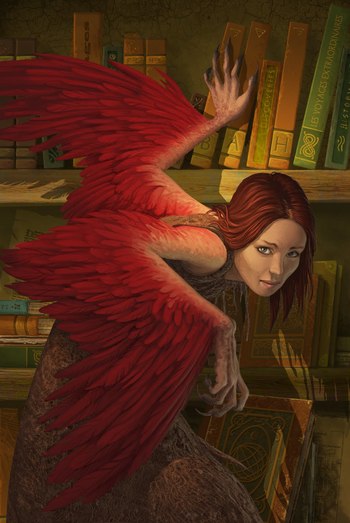 One of the harpies sent to torment Phineas, Ella is much more shy and bookish than her sisters. She briefly joins Percy, Hazel, and Frank on their quest to Alaska.

Nikai
Servants of Nike who ensure all participants have a stake in the proceedings.
Leucrotae
The leucrotae (singular leucrota) are a species of monster resembling a red furred lion with hooves and a semi-equine face. Three of them were sealed into a mansion along with Halcyon Green, serving as his guards while using him as bait for more demigods.
Maenads
Eccentric nymphs who follow Dionysus.

Talos Prototype
A prototype of the Talos robot encountered by the Argonauts. Flawed and imperfect, it serves as a guard dog to Hephaestus's junkyard.
Hank and Chuck
A pair of automatons shaped like angels that have spent the past few decades posing as statues on the Hoover Dam.
Chyrseae Celedons
Backup singers made by Hephaestus for Apollo.

The Waystation
A sentient building built on top of a train station in the 1880's. It serves as a sanctuary for demigods, Huntresses, and the like.
Emmie

Emmie, aka Hemithea, partner of Josie, mother of Georgina, ex-Huntress, ex-Princess. Once a Greek princess, she and her sister jumped off a cliff to avoid their father's drunken rampage. Apollo turned the two of them into minor goddesses (because he was dating their older sister and he thought they were praying to him for help). Retired about 40-50 years ago to be with the love of her life, and now helps run the Waystation.

Partner of Emmie, mother of Georgina, ex-Huntress, ex-con. Retired from the Hunters about 40-50 years ago to be with the love of her life, and now helps run the Waystation.

A seven year old girl who got adopted by Emmie and Josephine.

A headless ghost, and the half-brother of Trophonius, aka the oracle of Trophonius. Currently haunts the Waystation to stay near the caves where his brother's spirit gives prophecies.

General
A tribe of female warriors who worship war gods (like Ares, Athena, or Bellona). Unlike the Hunters of Artemis, they are allowed to have relationships and children with men — as long as those men are fine with being treated like second-class citizens. They are lead by Hylla.
Hylla
A daughter of Bellona, Hylla and her sister Reyna were born in Puerto Rico to an affluent family. Through unfortunate circumstances they became employees of the sorceress Circe, seen in The Sea of Monsters. After the spa is destroyed and she parts ways with her sister, Hylla joins The Amazons and eventually becomes their leader.
Kinzie
A member of the Amazons loyal to Hylla.
Otrera
The first queen of the Amazons. She was sent to claim the throne from her modern successor through combat and lead the Amazons in service of Gaia. Her tropes can be found here

The Fates
A trio of old women who control fate, particularly the time and circumstances of death.
The Boreads
Calais and Zethes, twin sons of the wind god Boreas.