The forces of Kronos of the Percy Jackson and the Olympians series. For the full list of characters, click here.

The King of the Titans and suitably the most powerful. He has domain over time and harvest. 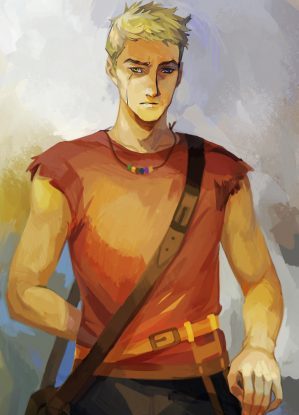 Son of Hermes and May Castellan. When he was an infant, his mother tried to become the new host for the Oracle of Delphi. It went horribly wrong. May went crazy from visions of her son's eventual future and became The Ophelia, and spent Luke's childhood babbling at him about his horrible fate. He ran away and met up with Thalia and Annabeth; they eventually made it to Camp Half-Blood, but not before Thalia died. Luke went on a failed quest and came back with a scar. He is a major villain in the first series, second only to Kronos, attempting to destroy the gods for their manipulation and abuse towards him. 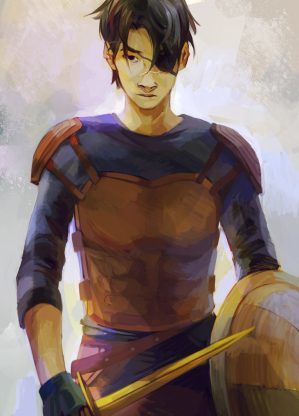 Son of Nemesis, the goddess of revenge and balance, Ethan was one of the many residents of Cabin Eleven who went unclaimed or had no cabin of their own because their parents were minor gods. He promised his mother he would make a place on Olympus for the minor gods, and in exchange she took his eye.

Alabaster C. Torrington
Demigod son of Hecate, who fought for the Titans in the last war. He shows up only in Son of Magic, a short story at the end of The Demigod Diaries.

Atlas
The Titan of Strength, nephew of Kronos, and father of the Hesperides and Calypso. For his role in the first Titanomachy, he was charged with holding up the sky.
Hyperion
The Titan of Light.
Krios
The Titan of Stars and Constellations.

Oceanus
The Titan of Oceans.
Prometheus
Titan of craftiness and forethought. Sided with the Olympians in the first war, but out of a desire for revenge on Zeus and thinking the Olympians cannot win switches sides to the Titans.
Koios
Titan of the North and forethought. He was said to take part in the war but never appeared, so his tropes can be found here.

The Minotaur
The bull-headed son of Pasiphae and the Cretean Bull and the first monster Percy ever faces.
Agrius and Oreius
A pair of twins born from a union of human and bear. They serve as Luke's bodyguards.
Dr. Thorn
A manticore posing as a professor in Westover Hall.
The Nemean Lion
A lion with invulnerable skin first killed by Heracles.
Kelli
An empousai who first served in Kronos's army, but later revealed to have actually been serving Gaea. Her tropes can be found here. For more on empousai go here.
Tammi
An empousai that posed as a cheerleader in Goode High School. She is Kelli's trainee. For more on empousia go here.
"I said something really intelligent like, 'Uhhh?'"
Kampê
Ancient jailer of the cyclopses and hundred-handed ones.
Karkinos
A giant crab first sent by Hera against Heracles during his battle with the hydra.
Clazmonian Sow
A giant flying sow sent against the defenders of Long Island.
Lydian Drakon
A giant drakon, fated to be killed by a child of Ares, that was sent against the defending forces of Long Island.
Queen Sess
Queen of the Scythian Dracanae.
Hellhounds
Monstrous hounds from the Underworld that serve many masters. For related tropes, see here.
Spartoi
Spartoi (singular spartus) are skeletal warriors created by planting the teeth of dragons and watering them with blood.
Telekhines
The former blacksmiths of the gods, creators of Posiedon's trident and Kronos's scythe.
Keres
Battlefield spirits of plague and famine.

Mortal Mercenaries
Ordinary humans enticed to serve those who would destroy them.
Typhon
Child of Gaia and Tartarus, one of the most dangerous beings to every walk the earth. While he served a tremendous role in Kronos's war plan he was not truly part of his army, so his tropes can be found here.