The minor gods of The Camp Half-Blood Series (Percy Jackson and the Olympians, The Heroes of Olympus and The Trials of Apollo). As a note, names are written in this form: Greek Name/Roman Name. For the full list of characters, click here.

In General
Tropes that apply to many of the minor gods.

Asclepius
God of healers. Son of Apollo. Currently under lock and key beneath his temple, by order of Zeus himself.
Britomartis 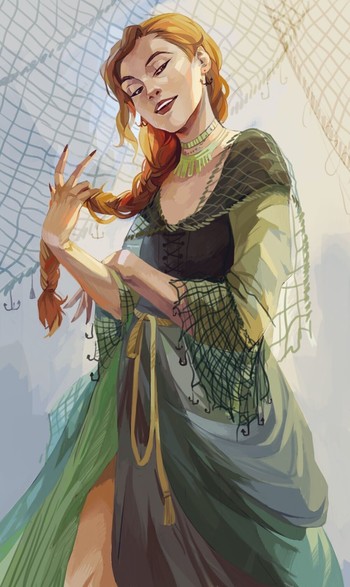 Goddess of nets- specifically hunting and fishing nets, though she can create some pretty nifty stuff with that (the internet is not under her domain). One of Artemis' attendants, and the patron of the Waystation.
Eros/Cupid
Son of Aphrodite/Venus and god of love. To date only his Roman form has been seen.

Harpocrates
Originally an Egyptian deity and a protector of children, later reimagined by the Greeks as a god of secrets.
Hecate/Trivia
Goddess note  Openly admits to actually being a Titan though. of magic and crossroads.
Heracles/Hercules
Child of Zeus who ascended to Godhood as a minor god who guards the doors of Olympus. Previous owner of Percy's Cool Sword.
Iris/Arcus
The goddess of rainbows and a messenger goddess. She used to run the Iris Messaging service, but has turned over most of it to her assistant Fleecy to focus on running her store and developing an identity of her own. Only Iris has been seen, with no mention of Arcus even existing.
Janus
Roman god of choices. For related tropes, see here. 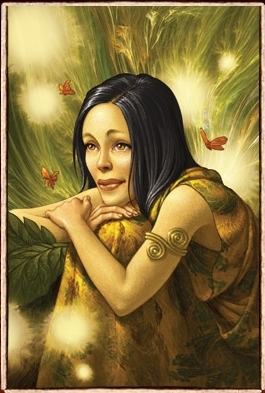 Goddess of springtime, Demeter's daughter, and Queen of the Underworld. Married to Hades.
Phorcys
God of the dangers of the sea. For related tropes, see here.
Pomona
Roman goddess of plenty. For related tropes, see here.
Terminus
The exclusively Roman god of boundaries. His tropes can be found here.
Thanatos/Letus
The god of death.
Triptolemus
A man who found favor with Demeter and was raised to a minor farming god. 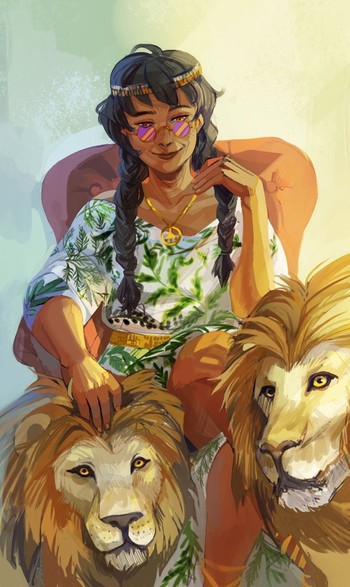 The Mother Goddess, Rhea is the Titaness wife of Kronos and the mother of the elder six of the Olympians: Zeus, Hera, Poseidon, and Demeter, plus Hades and Hestia. She presides over motherhood as well as an oracle.

Tethys
The Titaness of rivers and wife of Oceanus, with whom she had the Oceanids.
Theia
The Titan of gems and jewels, wife of Hyperion, and mother of Helios.

Aeolus
King of the winds, weatherman of Olympus.
Boreas/Aquilon
The North Wind.
Eurus/Vulturnus
The East Wind.
Notus/Auster
The South Wind.
Zephyros/Favionus
The West Wind, a servant of Cupid.

Achelous
Once god of the biggest river in Greece; currently stuck on Hercules' island as a punishment (whether it's for him or Hercules isn't clear).
East River
God of the East River in New York.
Hudson River
God of the Hudson River in New York.
Tiberinus and Rhea Silvia
Rhea Silvia is the mother of the legendary twins, Romulus and Remus. Her sons were set adrift on the Tiber river. Its god, Tiberinus, saved the twins, who would go on to found Rome, and ended up with her.