The residents of "Camp Half-Blood" of The Camp Half-Blood Series (Percy Jackson and the Olympians, The Heroes of Olympus and The Trials of Apollo). The page contains a list of the staff, Camp/Head Counselors. Though the Council of Cloven Elders is also located in the camp, they can be found here. Other full time residents are also listed here. For the full list of characters, click here.

Campers in General
Sons and daughters of the Greek gods. They have heightened senses and combat skills that take the form of ADHD and their minds are hard-wired to read Ancient Greek, which gives them trouble reading English. Their skills and personalities are inherited from their divine parents (children of Aphrodite will be Love Freaks, children of Athena will be highly intelligent, and children of Apollo will be musically and/or medicinally inclined, as well as a good shot with a bow).

Played by: Pierce Brosnan (The Lightning Thief), Anthony Head (The Sea of Monsters) 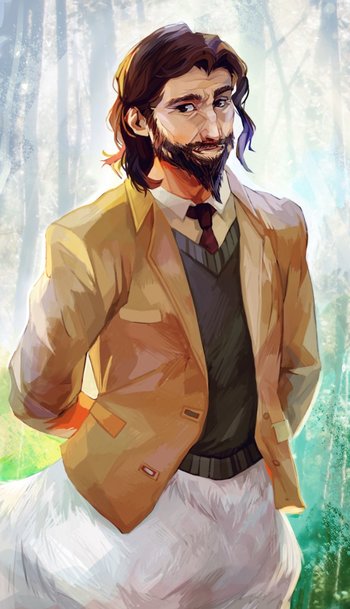 Introduced as Mr. Brunner, Percy's Latin teacher, Chiron is actually an immortal centaur keeping an eye on Percy. He serves as activities director of Camp Half-Blood and the Voice of Reason.
Mr. D
For information on Mr. D or Dionysus the Olympian, see here.
Argus
The head of security for the camp.

Oracle of Delphi
The Oracle (real name unknown) that gave the first Great Prophecy. Not much is known about her other then that she was the oracle since she was at least 12. She has been cursed by Hades to never rest in peace and let the Oracle's spirit find a new host until after the Great Prophecy. After the Great Prophecy she has been replaced by Rachel Dare.
Quintus
A son of Athena who survived long to adulthood, eventually hired on by Camp Half-Blood as a teacher. He's also quite secretive about his past.
Rachel Elizabeth Dare 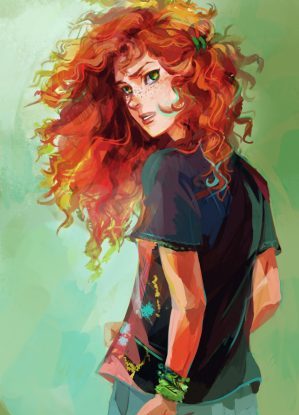 "We have to work together to defeat Gaea."

A mortal girl Percy befriends, who is later revealed to be able to see through the Mist. In The Last Olympian, she becomes the host for the Oracle of Delphi.

Cleaning Harpies
Three harpies named Aello, Celaeno, and Ocypete. The three work at the camp washing the dishes and eating any demigods they catch out sneaking out of their cabins at night. 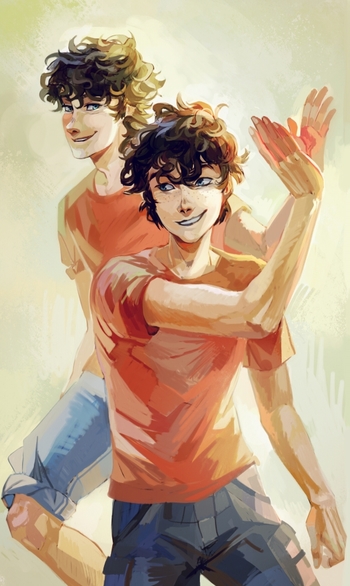 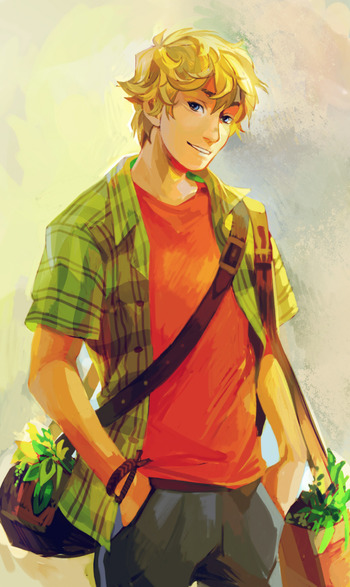 In General
Billie Ng
A daughter of Demeter.
Meg McCaffrey 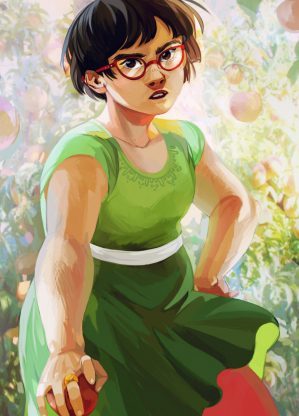 A demigod daughter of Demeter, whom Apollo must serve, and one of the primary characters of The Trials of Apollo. 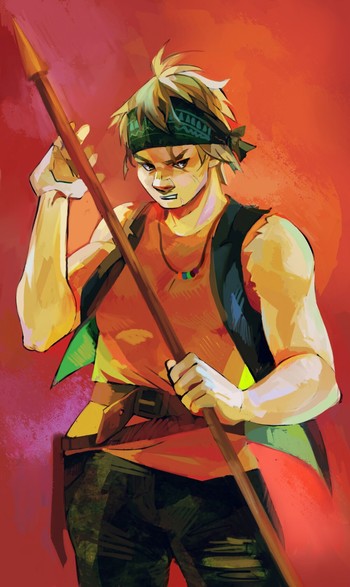 Daughter of Ares and head counselor of Cabin Five, Clarisse frequently bullies new campers and her first appearance involves trying to shove Percy's head in a toilet. She and Percy never get along, but they do develop respect for one another. 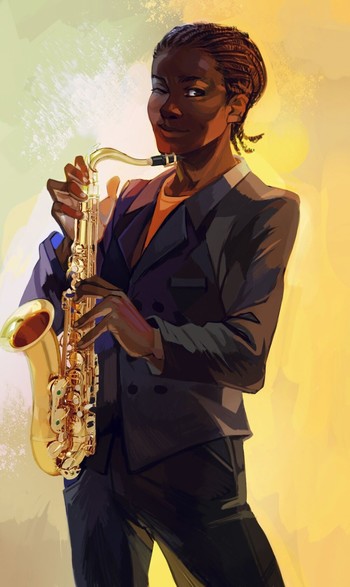 "What's going on? Also, where is my saxophone?"

Son of Apollo and Latricia Lake, a music theory teacher. His main gift inherited from his father is skill with music; he favors the saxophone, but he'll challenge himself with other instruments. 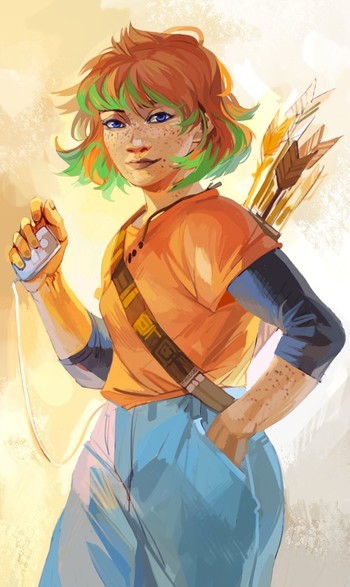 "I can't even qualify for the Olympics until I'm sixteen!"

Daughter of Apollo and archery coach, Darren Knowles. Kayla is the archery instructor at Camp Half-Blood.

Jerry, Gracie, and Yan
Three children of Apollo introduced in The Tower of Nero.

The Hunters
While not permanent residents, Cabin 8 is kept for their use during their infrequent visits. For tropes on them, see the Servants of the Gods page. 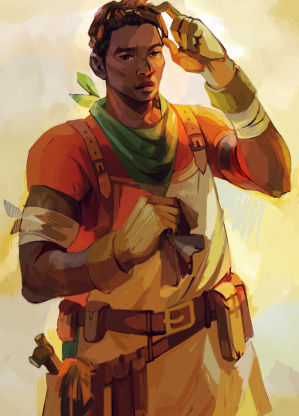 Son of Hephaestus and constantly hanging out in the camp's metal forges. Can build bombs. 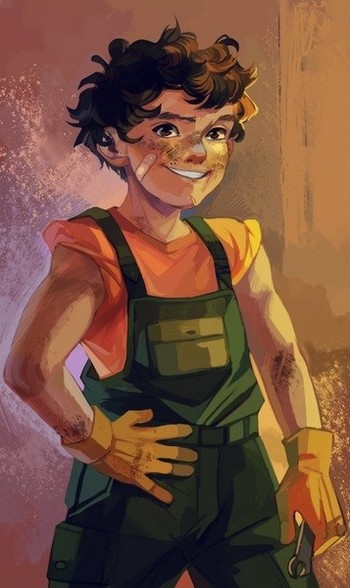 An 8-year-old son of Hephaestus. 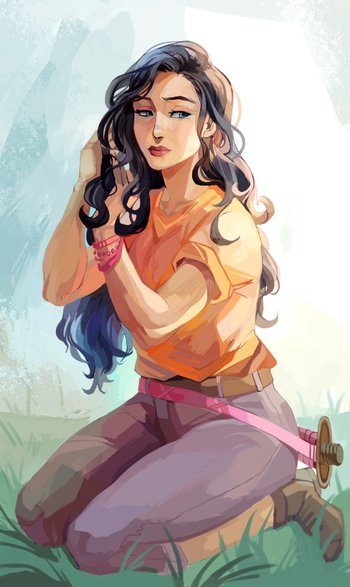 Daughter of Aphrodite, ergo stunningly beautiful and in love with love. Extremely talented with handling pegasi. Hooks up with Beckendorf between the fourth and fifth books.

Valentina Diaz
A daughter of Aphrodite.

In General
Cecil Markowitz
A son of Hermes. He's missing at the time of The Hidden Oracle.
Chris Rodriguez

Son of Hermes and boyfriend of Clarisse. He's introduced as working on Luke's side and having gone insane when he went on a mission into the Labyrinth, but Dionysus heals him at the end of Battle of the Labyrinth.

Ben
A wheelchair-using demigod of unknown parentage. He first appears in The Tower of Nero.
Chiara Benvenuti 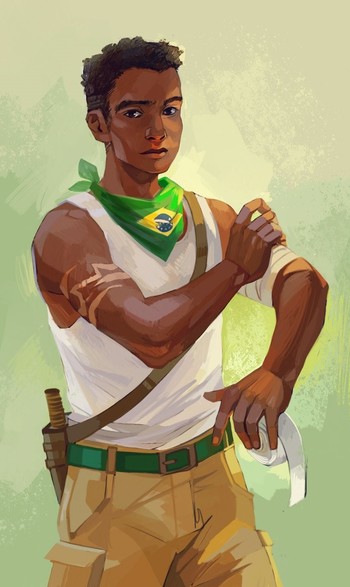 Grove of Dodona
A grove of oaks planted by Rhea that give prophecies. Burned down in ancient times, it has since regrown in the woods surrounding Camp Half-Blood.
Myrmekes
A nest of giant ants.
Pete and Paulie
A pair of palikos, spirits of geysers and sacred oaths, who live in the woods.

Blackjack
Percy's trusty horse, who he rescued from slavery in Luke's ship. Percy can talk with him because he's a son of Poseidon, who made horses.
Calypso 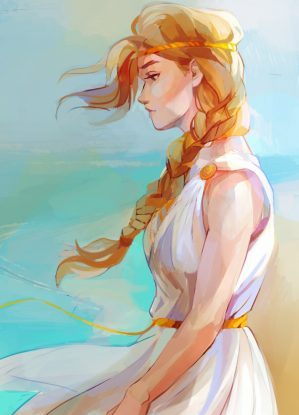 "The gods have placed ancient magic on this island to keep me here. A hero can leave. I cannot."
Atlas's daughter, who was punished after the first Titan War by being imprisoned on the island Ogygia. She looks after Percy when he washes up onto her island, and gives him moonlace before he leaves. She has become somewhat embittered and angry after the gods bailed on their promise to release her from her isolation. She was occasionally visited by demigods who couldn't leave until she fell in love with them. The most recent of these was Leo Valdez, who has rescued her.
Festus 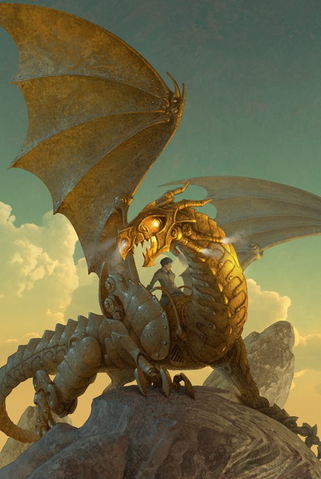 A dragon automaton and returning character from The Bronze Dragon, an ancillary story from the previous series. At the beginning of the series, he's gone haywire as a result of Beckendorf's death. Currently the figurehead and AI of the Argo II.
Mrs. O'Leary 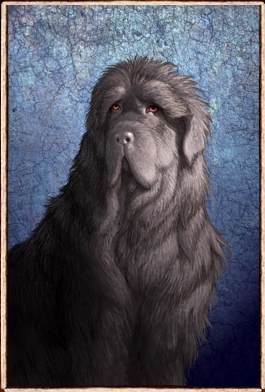