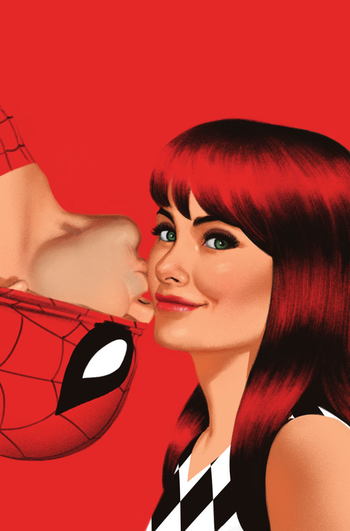 "Face it Tiger... you just hit the jackpot!"
— The Amazing Spider-Man #42, written by Stan Lee.
Advertisement:

Mary Jane "MJ" Watson is a Marvel Comics character created by Stan Lee, John Romita Sr., and Steve Ditko, first appearing in Amazing Spider-Man #42 (dated November 1966). MJ is best known for being the longtime wife of Peter Parker, and in general Spider-Man's most famous and publicly known Love Interest by far, represented in most media and adaptations and alongside Lois Lane is one of the most well-known supporting characters and Love Interests in comics and wider media, having appeared and headlined her own spin-off titles and becoming the rare non-powered supporting character who was more famous and well-known than other superhero characters in the wider culture (in a manner not unlike Alfred, Commissioner Gordon, J. Jonah Jameson).

She was first mentioned in Amazing Spider-Man #15 by Aunt May, who wanted to set her and Peter up for a blind date. Aunt May's neighbor, Anna Watson, was MJ's aunt, and she and May both agreed they'd make a good couple. Something that Peter wasn't exactly thrilled about, since, first, he was dating Betty Brant at that point, and second, because he thought that Mary Jane "needing" to be set up on a blind date meant she had to be ugly, obnoxious or both. Peter tried to avoid the date for as long as he could. MJ technically appeared onscreen in Amazing Spider-Man #25, although Lee and Ditko never showed her face but made it clear that she was incredibly beautiful based on the reactions of Betty Brant and Liz Allan, teasing out her appearance and expectations among readers if she would live up to the hype. Her first appearance in Amazing Spider-Man #42, designed and drawn by John Romita Sr., in one of the most famous panels and character introductions in comics history, both confirmed and exceeded expectations with a design that was instantly iconic and charismatic.

From the very beginning, Mary Jane was extremely popular. The well known comics-fan Alley Awards granted her the title "Best Female Supporting Character" in 1967, the year of her first appearance (Jameson had the Best Male Supporting Character by comparison). She owed this popularity not only to her famous build-up and iconic first appearance but also to the fact in Peter Parker's extremely hostile social life she brought much needed warmth, levity and cheer in his life. Likewise, she reflected a more contemporary spirit, being very much a child of The '60s in her fashion sense, her comfort with her sexuality, the fact that she lived on her own in her own apartment. She was a unique mix of comic relief, love interest, and vitriolic best bud. A dynamic that carried through even during her marriage with Peter, being one of the few characters who shared Spider-Man's unique sense of humor. For much of the Lee-Romita run, Spider-Man became a kind of romance comic, not surprisingly because Romita started his career in that mold and much of the stories revolved around the soap opera Love Dodecahedron between Harry, MJ, Peter and Gwen, which more or less ended with Gwen's tragic death, where MJ began to get closer to Peter. The Romita-Lee set-up continued in the highly popular Newspaper Comic Strip written by Stan Lee which was much Lighter and Softer than the 616 storyline. It was on these pages in the late eighties, that Stan Lee himself decided to marry Peter and MJ finally — an event which inspired the marriage in the regular continuity.

Until their marriage, Peter and MJ had an on-and-off romance with moments of strong affection and romance mixed with neurotic baggage on both sides. Peter decided to propose to her but she turned him down, and then a few issues later they broke up (offscreen) and she was Put on a Bus for nearly 40 issues until she returned in Amazing Spider-Man #238. This time Mary Jane returned a little Older and Wiser, more mature, and this led to her new role as Peter's best friend and confidant after the revelation in Amazing Spider-Man #258 that she had known that Peter was Spider-Man all along and sharing some family secrets of her own, strengthening their bond. When the decision was made to marry them by EIC Jim Shooter, Peter proposed to her on the rebound from the end of his relationship with Felicia Hardy, and between Amazing Spider-Man #290-293, MJ accepted and the couple were married in Amazing Spider-Man Annual #21 in a story called "The Wedding". The history of their relationship was elaborated upon in the graphic novel Parallel Lives by Gerry Conway which revealed that she had known Peter was Spider-Man since the night of Uncle Ben's death and that her entire history when she posed as a party girl in the Lee-Romita era was Obfuscating Stupidity. MJ is the first member of Peter's supporting cast with whom Peter could discuss his Double Life. A pretty big deal for Peter who never really had his own Alfred, Pa or Ma Kent, or anyone as a confidant about his masqueradenote Both Harry Osborn and Felicia Hardy knew it, but the former became Green Goblin and estranged from Pete when that happened, and Felicia Hardy was a villain-turned-hero who notably preferred Spider-Man to Peter Parker. Captain George Stacy also revealed that he knew in his dying breath, but Death by Secret Identity is in effect there. She was also the first of his love interests to like Spider-Man and Peter Parker, with her only reluctance about his superhero career being fears for his safety rather than prejudice for one or the other (a flaw shared by Betty Brant and Gwen Stacy who liked Peter and hated Spider-Man, and Felicia vice-versa).

The period of her marriage to Peter in the regular continuity is 1987-2008, a little over twenty years which started out with many strong storylines some of them being the best-selling comics in its time (including Kraven's Last Hunt, Todd McFarlane's Venom and Torment among others) but it also coincided with the Dork Age of The Clone Saga and a series of storylines that saw the couple separated and reuniting again for another strong period in comics, before leading to One More Day a storyline that erased Spider-Man's marriage to Mary Jane in a Cosmic Retcon that significantly overturned the Character Development of both Peter and MJ in the interim, and reset the continuity in a new composite period drawing elements from different periods. In the new continuity, (established with One Moment in Time), Peter and MJ didn't marry but had a long-term live-in relationship that ended in the aftermath of Civil War, after which MJ was Put on a Bus during Brand New Day.

She returned in time as a regular supporting cast, as Peter's friend and confidant again, with much tension and unresolved emotions that continued to simmer as both of them became involved in a series of dead-end rebound relationships. In the aftermath of Superior Spider-Man, MJ went to Chicago and after a series of incidents, ended up joining Stark Industries as Iron Man's assistant and became part of Tony's supporting cast. In Amazing Spider-Man #802, she returned to Spider-Man's supporting cast and started her relationship with Peter again in The Amazing Spider-Man (Nick Spencer). Meanwhile, in most Alternate Universe titles published in the same period, MJ remains by Peter's side. Such as the Newspaper Strip which is where they were married first, Spider-Girl which deals with her daughter, and is the longest-running title for any female character published by Marvel. Another AU called The Amazing Spider-Man: Renew Your Vows showed her married with Peter with another daughter. This time, she gains a set of Spider-Man powers, a costume, and becomes an active superhero — Spinneret — with the help of her husband's webbing tech for the first time.

In 2019, Mary Jane received her first ever ongoing monthly title, The Amazing Mary Jane, focusing on her acting career. Originally intended to be a mini, the book's popularity extended its lifespan. Unfortunately, COVID-19's impact on the company forced them to quietly cancel this series partway through the extension, right at the start of a new arc.

As the primary love interest of Spider-Man, Mary Jane is one of Marvel's most famous female characters in terms of appearances, multiple media adaptations, popularity, and profitability, which is particularly notable as she's a supporting character rather than an actual superheroine herself. She was further enshrined as Peter's Love Interest in the Spider-Man Trilogy (as portrayed by Kirsten Dunst) where her romance with Peter Parker was the central focus and emotional center of the entire series. A new iteration of Mary Jane was set to appear in The Amazing Spider-Man 2, to be portrayed there by Shailene Woodley, but her role was ultimately deleted from the final cut. Another cinematic variant —renamed Michelle "MJ" Jones-Watson— appears in the Marvel Cinematic Universe, where she is portrayed by Zendaya. This version of the character initially appears to be an original creation for the MCU with a very different personality and backstory, but it's eventually made apparent that she is meant to be that universe's version of Mary Jane when her full name is revealed in Spider-Man: No Way Home and the similarity between them is noted by the Norman Osborn of the Raimi trilogy. She has also appeared in most cartoons, starting right from the very beginningnote Her first appearance was in the final season of the first Spider-Man adaptation, which aired in 1970 as well as multiple video games from the 1990s onwards, with her most recent appearances in both animated and interactive mediums being Spider-Man (PS4) and Spider-Man: Into the Spider-Verse in 2018.

Mary Jane Watson has appeared in the following works: