"We really aren't alone, are we?"
Voiced by: Kōtarō Nishiyama (anime), Yuki Kaji (drama CD)
"God, thank you for not taking Kotarō away from me too. It's pathetic, but I think I'm probably the one who's being saved by Kotarō's warmth."

A high school freshman who, having lost his parents in an airplane accident, is now left to care for his little brother Kotarō. Having been taken in by Yōko Morinomiya and enrolled at Morinomiya Secondary School, where she is also the chairwoman, he is tasked with also working at the school's daycare in exchange for her legal guardianship. He is known as an "ideal big brother", who embodies everything a Cool Big Bro has to be in its entirety.

"Lame."
Voiced by: Yuichiro Umehara
"I hit people who don't do what I say. I'm not going to treat him differently just because I'm looking after him."

Ryūichi's classmate and star player of Morinomiya's baseball team. Rude, cold and stoic, he has a habit of putting his little brother Taka in his place by hitting him in the head.

"Play till your heart's content"
Voiced by: Tomoaki Maeno
"Oi! Taka! I was having a good dream. What will you do to make up for that?"

An alumnus-turned-faculty member of Morinomiya and initial caretaker of the daycare before Ryūichi and Kamitani's arrival. A man seeking some direction in his life, he was inspired by the Chairwoman's late son to stick around the school. Otherwise, he is often found sleeping and taking care of Midori while Ryūichi looks after the other kids.

The Kids at the Daycare

Ryūichi's younger brother. Well behaved, sweet, and somewhat stoic, he sometimes acts as someone older than his own age. He is extremely close to his older brother, specially following the death of their parents. 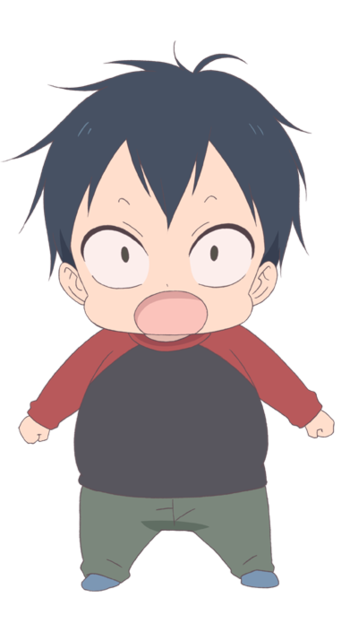 "Aniki, you jerk… I love you."
Voiced by: Yuko Sanpei
"Ryū-chan, my wish is that I can play baseball and be as cool as my brother!"

Hayato Kamitani's little brother. He loves Sentai shows and always carries around a toy sword, which he considers his greatest treasure. He and his brother have a strange but ultimately loving relationship. 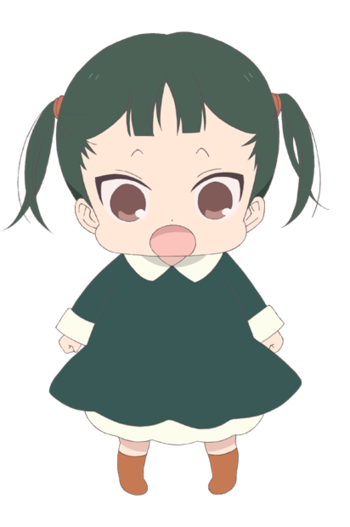 "You can't get in the way of peopwe's works, Kotarow-chan"
Voiced by: Konomi Kohara (anime), Ayana Taketatsu (drama CD)
"Thankyou fow wooking aftew me, I'wl be a good giwl. Mummy towd me to be a good girl, I fowgot!"

The oldest of the children. She's mature and well-spoken for her age, and intends to study really hard once she gets older. She has a fondness for her giraffe plushie that is always seen in the daycare center and is very close to her mom, something her dad finds beautiful, but is also a bit jealous of. 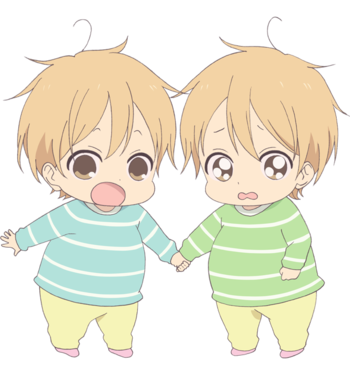 Identical twin brothers with not-so-identical personalities: Takuma is always cheery, while Kazuma is always teary. Despite their different temperaments, they're very close to each other and are rarely ever seen apart. 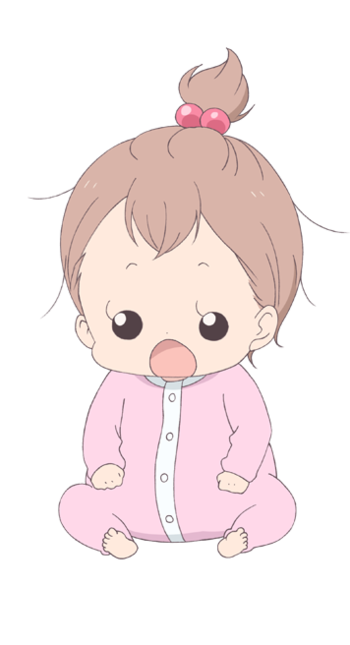 The sole infant of the daycare kids. Usaida usually looks after her when he isn't sleeping. 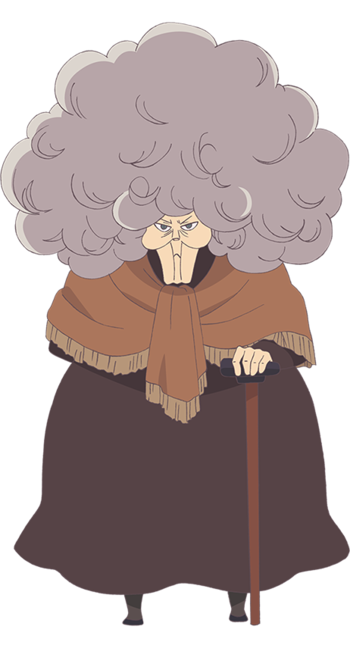 Chairwoman of Morinomiya Academy and adoptive guardian of Ryūichi and Kotarō.

"I promise to protect Koutarou-sama even if it costs my life"
Voiced by: Daisuke Ono
I... was not aware of that. To the chairwoman, Ryūichi-sama and Kotarō-sama, and... even I am considered family.

Chairman Morinomiya's butler, who takes care of her mansion and is known for excelling at every house task.

The Chairwoman's son and only child, as well as another teacher at her school. He, along with his wife, died in the same plane crash as the Kashima brothers' parents, which is what lead to his mother taking in the brothers.

The school's brightest student and a member of the Advanced Class. She is a stickler for the school's rules and berates people who break them. Tends to react very harshly to everything, but she hides a soft and lonely interior.

"Nothing matters in love, not even age."
"Oh no. My angel, no, my goddess is here!"
Voiced by: Yoshimasa Hosoya

A second-year boy with several love woes and a tendency to fall in love.

"Well, maybe I do like him a little."
Voiced by: Kaede Hondo

Ryūichi and Kamitani's classmate and a player at the school's tennis team, who is clearly and hopelessly lovestruck for the former.

"You just seem so chubby and so round!"
Voiced by: Toshiyuki Someya
"But occasionally, coming over to pinch the kids cheeks, isn't that bad."

Inomata and Yagi's quiet but reliable classmate from the Advanced Class.

Nekota
Inui's classmate who has a slight crush on him. 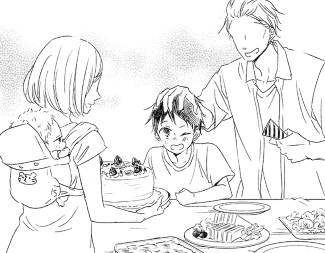 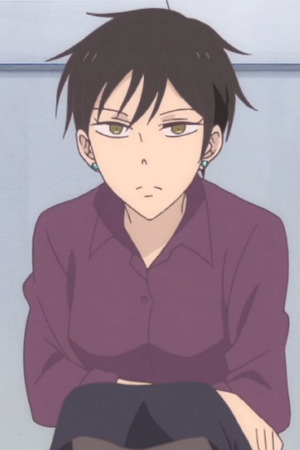 "Honestly, I don't know who you take after." 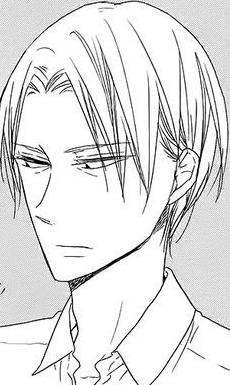 "Next time, if you have any personal matters, please consult me after work hours as I may get distracted."

Hayato and Taka Kamitani's parents. Shizuka teaches science at the middle school division while Hebihara chemistry at high school. Divorced prior to Taka's birth, meaning the younger son is unaware he even has a father.
Yayoi and Satoru Kumatsuka 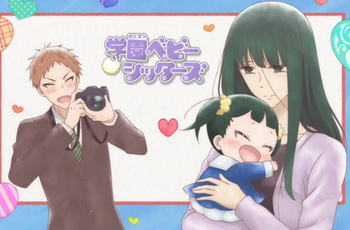 The favoritism is quite obvious.

Kirin's parents. Yayoi is the head of the high school's Drama Club, while Satoru is a freelance photographer.
Umi and Kōsuke Mamizuka 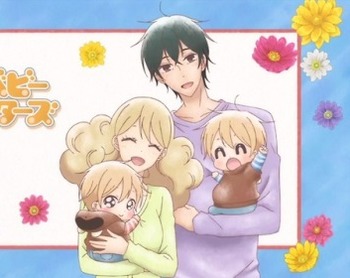 The actor and the woman of physical activity, demonstrating the image of sadness and happiness.
Voiced by: Ayaka Saitou (Umi), Satoshi Hino (Kōsuke)
Takuma and Kazuma's parents. Umi is a Physical Education teacher while Kōsuke is a famous actor.
Yukari and Yutaka Sawatari 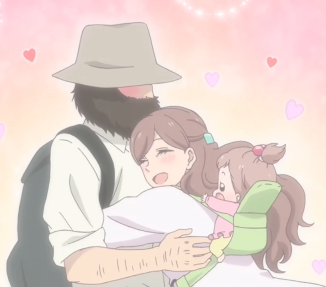 Very much in love, even when they're often far apart.

Midori's parents. Yukari is a secretary at the school, while Yutaka is an archaeologist currently working in Turkey.
The Nezu Family
Chuukichi Nezu's family consisting of his parents, older brother Daikichi, three younger brothers (Shōkichi and twins Suekichi and Kichi) and younger sister Kyōko.
Inui Family
Hiroyuki Inui's family, consisting of his middle-schooler sister Mika and their parents.
Tsugumi
Kamitani and Taka's infant baby cousin and Shizuka's nephew. The Kamitani family takes care of him for a day when his parents are down with the flu.
Tamako
Nekota's toddler relative who visits the daycare for a day.

Asahi Kisakata
An actor and Kousuke's co-star in a show. Plays the main character "Justi-Knight", which is the kids' favourite show. He has great respect for Kousuke and calls him "Kou-san".