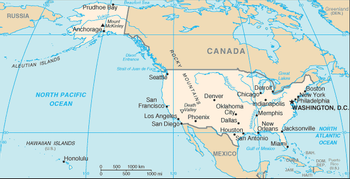 The United States of America — commonly referred to as the United States, the US, America, the USA, the Union (especially when discussing the Civil War), or just the States — is a Northern American constitutional federal democratic republic occupying a large part of the continent of North America. Its mainland borders Canada from the north and Mexico from the south in its main territorial area. Outside of this territory, the nation also contains the states of Hawai'i in the Pacific Ocean and the vast but mostly unpopulated Alaska between the northwest of Canada and North Asia, which shares a sea border with Russia. In all, the country consists of fifty states,note It's a surprisingly common misconception that there are actually 46. Massachusetts, Pennsylvania, Virginia, and Kentucky call themselves "Commonwealths" instead of "States" as nothing but their long-form title that every state has; these four simply use "Commonwealth of ____" instead of "State of ____." the state-neutral capital of Washington, D.C. (for "District of Columbia"), and assorted commonwealths and protectorates. As the name of the country implies, these states are more than just regional districts; each has its own distinct character and history, and state governments have a good deal of autonomy as well as influence on the rest of the nation.

The United States is the third largest country in the world in terms of population (330 million, a very distant third behind China and India, which both are over a billion ahead of that mark) and fourth largest in terms of total area (9.5 million square kilometers/3.6 million square miles, behind #1 Russia, #2 Canada, and #3 China)note And if you only count land area, Canada gets bumped from the #2 spot, putting the US in third behind Russia and China. It's so huge, in fact, that it takes three to four days on end to drive from one opposite end to the other; a flight from London to Moscow is almost 900 miles shorter than one from Los Angeles to New York. One state of the fifty, Texas, the largest state in the mainland and second largest overall, is almost three times as large as the entire United Kingdom, or (for another European comparison) only slightly smaller than France (the largest country in Western Europe). Alaska, the largest overall, is about the same size as the United Kingdom, France, Germany, and Japan combined.note Without this state inflating its size, the U.S. mainland would rank fifth in size behind Brazil. If you're planning to come here, don't expect to hit all the widespread landmarks in one trip unless you have a lot of time to spend and don't mind paying for many flights or sitting through long car drives or train rides (and if you opt for the latter, don't expect the trains to run on time; public transit has always been low on America's priority list).

Colonized by Europeans from the 16th century onward, thirteen of the British-ruled colonies on the eastern coast declared independence in 1776 and combined to form their own country under the protection of the kingdoms of France and Spain. The new settler government then removed the natives from their lands as it expanded westwards, killing many of them directly when they resisted and indirectly by forcing them into places where they couldn't get enough food or shelter; Native Americans now have U.S. citizenship, comprise roughly 1% of the population, and mostly live outside of the reservations, which still exist. The government also purchased land from France, Britain (not Canada), Russia, and Denmark, annexed the Kingdom of Hawaii, and conquered territory during wars with Mexico, Spain, and (much later) Japan.

Most of the country's first century was marked by political fights over the institution of race-based slavery, a legacy of European colonialism that the states fought over in Congress before eventually fighting over on the battlefield. The American Civil War, the deadliest conflict in the nation's history, eventually ended with emancipation for millions of enslaved people of African descent (the vast majority of which had been born into American slavery) and provided them with citizenship. African-Americans continued to experience second-class citizenship, persecution, and violence in the years since, and while the election of Barack Obama to the highest office in the land in 2008 was a sign of incredible progress, ensuring true equity for this group of Americans (roughly 12% of the population) continues to be an important issue today.

Starting around the end of the 19th century, the United States' resources and transcontinental territory situated them to become a true power on the world stage. From the end of World War II, if not before, the United States became a superpower and is now one of the most powerful and influential countries on the planet — for a time, it was universally recognized as the only superpower on Earth (with the United Kingdom losing its superpower status after the Suez Crisis of 1956 and the Soviet Union collapsing in 1991). While some bodies have recognized China as joining the US as a competing superpower in the last decade, it still has a lot of advantages that few other countries can compete with. It is technologically advanced and possesses a large industrial base, a large military, and great financial wealth and is also one of the largest exporters of modern media, with its products being seen the world over.

The United States has a very diverse population, as its history of expansion, international prominence, job opportunities, and promises of freedom have resulted in many different groups of people either immigrating to or being absorbed into the populace. The majority of American citizens are of European descent, as the government has generally placed few restrictions on immigration from that continent; however, their majority grows smaller every year as migration patterns have changed, and Caucasians are projected to no longer be the majority within the next few decades. Americans of Hispanic descent make up around 17% of the population, a legacy of the war with Mexico and the two nations' shared border and also of Puerto Rico, which America has claimed as a territory for over a century. Asians have been immigrating to the U.S. from across the Pacific for many years, and though the U.S. government long attempted to limit this, the Asian American population has grown to around 5% of the nation's total since restrictions were mostly lifted in the mid-twentieth century. 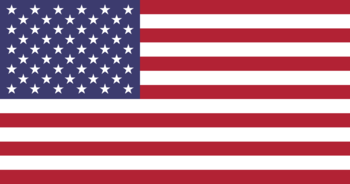 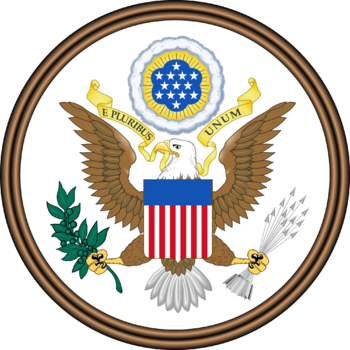 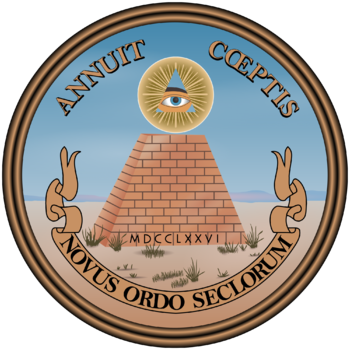 It was adopted in 1782 (6 years after the United States declared independence on July 4, 1776).
The American National Anthem
O say can you see, by the dawn's early light,
What so proudly we hailed at the twilight's last gleaming,
Whose broad stripes and bright stars through the perilous fight,
O'er the ramparts we watched, were so gallantly streaming?
And the rocket's red glare, the bombs bursting in air,
Gave proof through the night that our flag was still there;
O say does that star-spangled banner yet wave
O'er the land of the free and the home of the brave!
Government