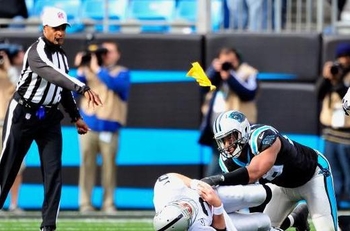 The following is an explanation of various penalties in American Football. The list is primarily NFL-oriented; college, high school, and Canadian penalties are noted as such as appropriate. If one of these infractions is seen by an official, they will throw a yellow flag (orange in Canada) and, if the penalty calls for it, blow their whistle to signal the play dead. If they're not the referee (the one wearing the white hat), they will then tell the referee what they saw and which team and/or player caused the infraction, which the referee will then announce to the audience. On rare occasions, an official will also throw their hat; this almost always happens during altercations on the field or other situations that lead to multiple penalties, and when that official has already thrown their flag.

The coach of the team that did not cause the penalty has the option to decline the penalty, which means that the play will stand as called, and the loss of yardage or downs will not occur. There are moments when declining a penalty will benefit the team. Moving to 4th down, rather than the penalty forcing them to repeat 3rd down, is one such example. Another common example is any time a "live-ball" defensive foul occurs and the offense gains more yards than the penalty would give them, or scores.

If the offense and defense both commit a penalty on the same play, the penalties may negate each other (called offsetting) depending on their nature and when they were committed in the course of the play. If this occurs, the penalties are announced then declared to offset.

Penalties are announced in an A-B-C-D format where:

Penalty: 5 yards
Signal: Referee circles fists/forearms around each other at chest level.

Penalty: 5 yards from spot of foul + loss of down; safety if it's called in the end zone
Signal: Referee makes up-and-down motion with open hand behind back. (Canada: Referee places one arm on chest, with elbow out to the side and palm open and facing down, and then moves arm away from chest.)

Penalty: 5 yards
Signal: Referee holds right hand flat at chest level and extends arm out to the side.

Penalty: The receiving team can take the ball at the spot where it went out of bounds or 25 yards from the spot of the kickoff.
Signal: Same as for false start. (Canada: Same as false start/procedure, plus a swinging motion of one leg to simulate a kick.)

Penalty: 5 yards + loss of down
Signal: Referee touches shoulders with both hands.

Penalty: 5 yards; if touch occurs inside receiving team's 5 yd. line, it's a touchback
Signal: Same as for forward pass.

Penalty: 10 yards or the spot of the foul (whichever is further from the line of scrimmage) + loss of down. Safety if called in the end zone.
Signal: Referee makes a sweeping motion with both hands from right shoulder down toward left knee.

Penalty: 15 yards from the spot of the foul; tackling the receiver can lead to an ejection.
Signal: Referee makes pushing motion with both hands.

Penalty: 15 yards added to yardage at end of play + first down
Signal: Sweeping downward motion with one hand.

Either offensive or defensive

Penalty: 15 yards (offense), 15 yards + first down (defense)
Signal: Referee makes chopping motion onto one thigh. (Canada: Same signal as for personal foul, as this is considered a subset of unnecessary roughness.)

Penalty: 15 yards (offense), 15 yards + first down (defense)
Signal: Same as block below the waist, but with both hands. (Canada: Referee raises both hands, with palms open and facing each other, to shoulder level on one side, and then makes chopping motion toward the opposite hip.)

Penalty: 5 yards, and the game clock does not start until the snap
Signal: Referee places one forearm on top of the other at chest level.

Penalty: The player's team is charged a time out (college); 5 yards (high school)

Penalty: 15 yards (offense), 15 yards + first down (defense)
Signal: Referee makes pulling motion at collar with right hand. (Canada: Same signal as for personal/major foul, as this is considered a subset of unnecessary roughness.)

Penalty: 10 yards (offense), 5 yards + 1st down (defense)
Signal: Referee makes pushing motion with one hand while grasping that wrist with the opposite hand.

Penalty: 5 yards (offense and defense)
Signal: Same as for encroachment.

Signal: Referee extends one arm nearly horizontally, and then moves it in a circular manner.

Penalty: 10 yards (offense), 10 yards + first down (defense)
Signal: Referee makes kicking motion with right foot against back of left foot. (Canada: Referee extends arms downward to knee level, going into a semi-squat, with hands bent inward toward the center of the body.)

Penalty: 15 yards (offense), 15 yards + first down (defense); can also lead to ejections for either side. In college, a confirmed targeting call is an automatic ejection and suspension for one full game (if done in the second half of one game, the player can't play the first half of the next game).

Penalty: 15 yards (offense), 15 yards + first down (defense); can also lead to ejections for either side. Intentional contact with an official is an automatic ejection.
Signal: Referee holds both arms out to sides with hands flat and palms down. (Canada: Referee places one hand behind the back at waist level.)

Signal: Referee holds left fist over his head and makes a chopping motion with right hand against the left wrist. This signal is followed by the signal for the specific penalty. (Canada: Referee extends one arm to the side of the body and makes a pumping motion.)