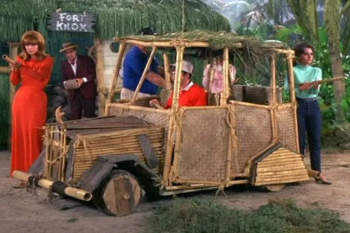 Baby gets thirty miles to the gallon - of coconut milk!
"Good thing they made everything out of balsa wood back then."
— Tom Servo, Mystery Science Theater 3000

Bamboo Technology, named for the unlikely devices that the Professor came up with on Gilligan's Island, is the use of mechanisms with a level of technology closer to that of the Stone Age to achieve feats usually achieved with Industrial or even Modern Age technology. In general they are not necessarily made of bamboo — the ones on The Flintstones were often made out of things like wood or stone or powered by creatures like dinosaurs. What characterizes all of them is the self-evident impossibility that they'd actually work... and yet they work anyway. Most likely to be seen in the more farcical sitcoms.

Bamboo Technology includes the Rube Goldberg Device, but not anything that relies on magic to work. Those devices are Magitek. Pretty much sure to crop up in past-based Punk Punk settings, especially Scavenged Punk.

When the mechanisms are made with modern components cobbled together, the trope is Homemade Inventions. A subtrope of Alternate Techline, where a civilization has a technology without a precursor that's normally found with it (e.g., having automobiles without internal combustion, steel, etc.). Contrast Low Culture, High Tech, where primitive cultures use technology they didn't invent and can't comprehend. Compare Sufficiently Advanced Bamboo Technology, which is very advanced technology designed to look primitive.

Spongebob and Patrick make fortresses, tanks, and mechs out of sand in their war.

Spongebob and Patrick make fortresses, tanks, and mechs out of sand in their war.