A group of survivors introduced after the Time Skip following the war with the Saviors. They disguise themselves using walker skins as mask which hide their scent from the dead, and they communicate with each other even while traveling with walkers by whispering. Under Alpha's guiding creed, they seek to continuously expand their massive horde of walkers they are able to command and destroy any holdouts of civilization, believing all must return to living like animals and that humanity is dead. Their existence is unknown to the other Washington communities until they migrate to their territory. When the survivors cross into the territory claimed by Alpha, it begins a long, brutal cold war between survivors seeking to honor Rick Grimes's legacy and hope for a future and Alpha's horde of the dead. 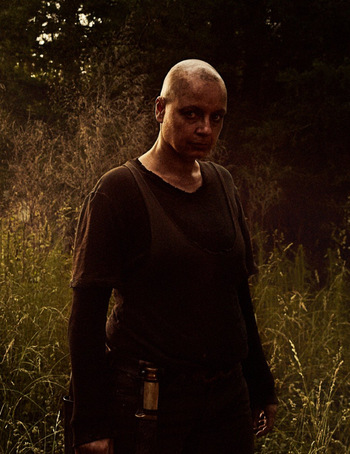 "... if the Alpha doesn't assert herself, there's chaos."

"I've seen how you live. I've walked your streets. It's a joke. Your communities are a shrine to a long dead world."

The Leader of the Whisperers. Before the apocalypse she was already a nasty piece of work, being brutally abusive to her daughter Lydia as early as her infancy, only to lie and delude Lydia into thinking her father was the abusive one. After their hiding spot was compromised and after she killed her husband, Alpha fled with Lydia into the world. She eventually formed a cult following among people who returned to living as "animals" and disguising themselves with walker skin masks.

When Lydia was captured at Hilltop, Alpha bargained for her retrieval, and began plotting against Hilltop and any communities they were allied with. Henry ended up incurring her wrath after rescuing Lydia from her camp. Alpha soon made her way to the community fair and massacred ten survivors - Henry among them - to mark her territory, threatening to wipe out the communities with her massive horde should they ever cross her land again. Alpha's twisted love for her daughter, however, only exacerbated her obsession with the communities and the threat they posed to her way of life. 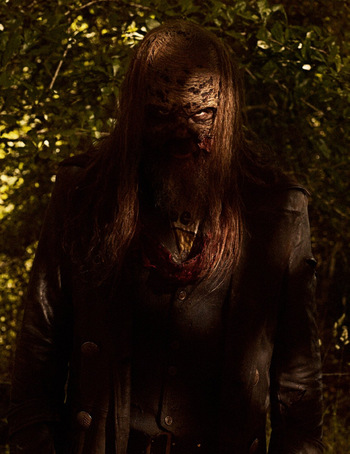 "You and your people are nothing to me. Your world is already dead."

Alpha's second-in-command among the Whisperers. When Daryl, Henry, and Connie rescue Lydia from the Whisperers, Beta is sent to retrieve Alpha’s daughter. Though he loses his ensuing fight with Daryl, he recovers and bears witness to Alpha threatening the communities with annihilation by way of their horde. 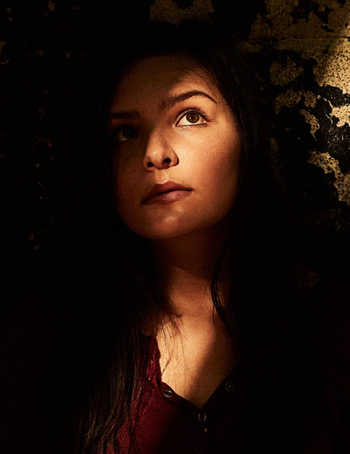 Portrayed By: Cassady McClincy, Scarlett Blum ("Omega"), Havana Blum ("We Are the End of the World")

"I barely remember the world before all this. But my mom, she told me how it was changing, how we had to change with it, how we needed the dead and each other to keep safe."

A teenage Whisperer captured by Hilltop, Lydia is revealed to be Alpha's daughter who has suffered years of physical and mental abuse at the hands of her mother. Daryl and Henry manage to bond with her until Alpha demands Hilltop surrender her. Lydia returns to the Whisperer camp but is then rescued by Henry, Daryl, and Connie. She forms a close, romantic bond with Henry and is allowed to join the communities by the assembled leaders at the fair. However, Alpha infiltrates the fair and murders Henry and nine others, and attempts to take her daughter back, but Lydia rebuffs her. Lydia suffers from suicidal tendencies for months, blaming herself for Henry and the others’s deaths until Carol helps her heal during the winter storm. 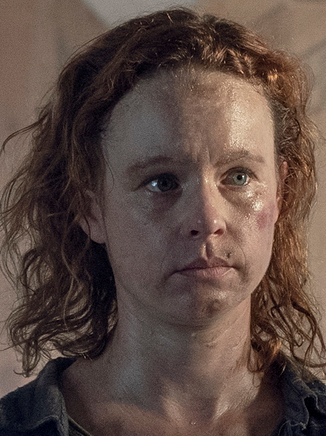 "I should have left you behind when I had the chance."

"When it all went down, my sister and I kept making bad decisions. We needed someone to make them for us, and then we met Alpha."

A Whisperer who is protective of Alpha.

Gamma's sister. She was ordered by Alpha to bring her newborn son to the stand-off at Hilltop as insurance against Hilltop’s superior firepower. When the baby began to cry and attract walkers, Alpha orders her to surrender her child to the walkers. Luckily, Connie rescued the baby and took him into Hilltop, where he was eventually adopted by the Sutton family.

"You lie to yourselves. To each other. You fight for what? Sandwiches? You ignore the truth, when it's staring you in the face. I would never betray Alpha. She rescued me. She protects me. She loves me. She loves us all."

One of the Whisperers who manages the horde.