Characters / Citadel Of The Heart Grandis

Weakness: Soul link devices, incredibly loud noises even more so than most predator eye users, anybody who can outlast him in regards to stamina, logic, reason, and senses become blinded during moments of personal frustration against a given entity.note Eventually it's learned that oxygen rich environments are outside of Grandis' natural respiratory abilities, and that being on the surface requires Grandis to only breathe very small amounts of oxygen into his system in a short amount of time. If he inhales too much oxygen at once, his very respiratory system could collapse on itself. 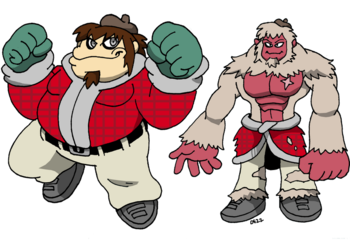 Grandis in Base Form and Beast Mode as drawn by BlueIke 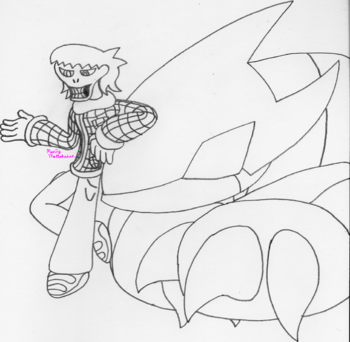 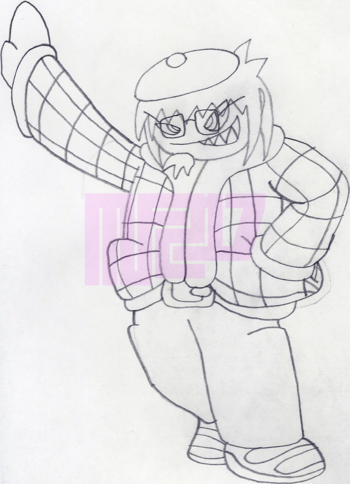 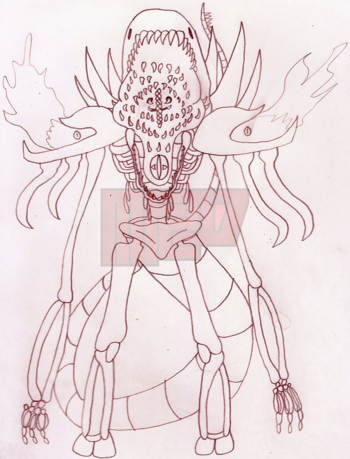 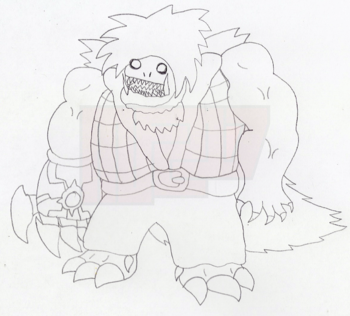 to see Grandis as he appears in Reflection Code.

Grandis. The leader of the bunch, who thinks everyone knows him well (at least to be fair, they should). He's noted as being the leader as dictated by Ultima and Dragora Galaxia, because whomever is the King of the Ultimorian Deities is the only known individual who can actually best Ultima and Dragora Galaxia in a fight, and never anyone else unless Grandis either gives up the throne, or somebody takes it from him by force. Grandis is known as "The Enforcer" as to why he's an Ultimorian Deity at all; his job is to intervene in situations in which one or more Ultimorian forces are at odds at each other should they pose too big of a threat for the universe. Originally, this job was to simply mock him, as until the recent era of The Multiverse, the Ultimorians were unable to leave their own native multiverse, but now that everyone is scattered across space and time, his role has an actual meaning again.

On the surface, he appears to be using the name of the author himself; Martin W. Mollohan, but this appears to be because Grandis, despite his usual impressions he gives, is often seen as a Puppet King in more ways than one; it is briefly implied in Sword Art Online: Special Edition that Grandis has a mind separate from the author himself, but it's constantly being pushed to the sidelines in favor of Grandis serving as a lab rat for everyone else. Regardless, he's stated by the author to be a more idealistic, albeit incredibly exaggerated, take on his more aggressive personality; while some friends have compared him to Odin, the author instead feels "Bowser as a good guy" better sums up the nature of his character, especially considering Grandis' physical abilities.

Grandis is an enigma of a character once you're in the know about any of the above information, or to anything of what is below. Being a character who is guaranteed to appear Once an Episode will do that for you, even among his fellow Ultimorian Deities and his son, whom sometimes don't even get appearances as often as Grandis does. To date, Grandis is the first Ultimorian Deity who has finished his debut arc in terms of establishing his overall presence and character, but due to his lazy nature, he tends to give Ultima the primary leadership of the whole group unless Grandis has his hand forced otherwise. In such a situation, Grandis will be the one calling the shots. Oddly enough, Grandis does seem to call the shots a lot more often when he's in a role of leadership not of the Ultimorian Deities; why he's this inconsistent has yet to be cleared up, but it's already been established he's already an Oxymoronic Being due to the fact he's The Pig-Pen despite having a Super OCD attitude towards everything not related to himself.

Grandis' first two phase forms tend to be interchanged between each other in terms of which one is considered his "default". Pictured to the right on top is Phase 1 Grandis standing next to an empty armor of his Phase 4 form. Below those two is Phase 2 Grandis, appearing with much lengthier hair, a goatee, and being a very fat in appearance man. Phase 1 Grandis is for when Grandis needs to conserve as much energy as possible; making himself practically skeletal in the process of doing so. If Grandis has enough energy to sustain his presence for a very long time, he'll often times used a pseudo-Phase 1 form which heavily resembles his Phase 2 form; it simply isn't powered up to the full Phase 2 power proper. Not a whole lot changes in Grandis' arsenal between his Phase 1 to Phase 3 forms, but once he becomes Phase 4, that's when he pulls a Let's Get Dangerous! and decides to showcase how much power he has hidden within any given fic he appears in. If for whatever reason Grandis decides he needs more powerful, well, let's just put it this way; you're fucked, kiddo.

It's worth noting that during the events of Digimon Re: Tamers, Grandis is seemingly killed off, only for the events that occurred with the Digimon known as Brondramon to have been a simulation. Despite that, the Reality-Breaking Paradox that would occur upon the death of an Ultimorian Deity still took place, and the Grandis that awakens from the simulation is actually not Grandis-Prime, but rather a reincarnation that was immediately swapped into existence as Grandis-Prime was now just a heavily scorched corpse. All who witnessed the simulation, except for Henry, don't immediately know that Grandis-Prime is long gone, since they had never dealt with these events before at all, leaving them initially clueless as to why Grandis is behaving so weirdly throughout the next several chapters. Henry eventually confronts the new incarnation of Grandis, and is bluntly informed that Grandis-Prime is no more, because even attempting to simulate the Reality-Breaking Paradox caused the death of Grandis-Prime to be accelerated into motion, and thus the new incarnation's sudden appearance happening at the same time, conveniently placed in a point in time where he at first gives the impression Grandis-Prime survived the ordeal. In addition to this, Grandis-Prime still technically survived due to his now temporally displaced "Kid Grandis" incarnation winding up in the present, and proving to be a much bigger hassle than Grandis ever was known to be prior. It's slightly mitigated in terms of Grandis' death, though, in that due to him being the Omniscient, he slowly regains old memories of his from his past incarnation, and is only helped further with this by the laser beam Kizmel had fired into space to summon Ultima's attention to the situation. Ultima's exact role in the sudden appearance of a new Grandis is questionable, though, as Grandis himself showcases quite an ungrateful nature towards Ultima, as this distrust towards him would be seen decades later in Sword Art Online: Special Edition.

In the non-canon installment You Have Entered The Uninvited World, Grandis does not have any offspring, with the role of Chronicler's father going to Zaalim. Other than that not much has changed aside from Grandis' having always been single in this version. He tends to carry on hand the RIOT Brigade weaponry as opposed to storing it in Hammerspace, usually always having a Megatron-esque fusion cannon attached to his right arm.

Meanwhile, even with Citadel of the Heart being declared a Dead Fic, this is not the end for Grandis. Grandis, due to being MF 217's Author Avatar, has appeared in virtually all of MF217's other works and media he makes even long before Citadel of the Heart even came into being. Much like Chronicler and Mirror M, his page will continue to be updated accordingly, even when their first major day in the limelight has been canned.

Tropes that apply to Grandis

During The '60s and The '70s, Grandis was repeatedly cloned in an attempt to extract his immortality from the original specimen who would remain dormant until the 2030s, and the result were numerous clones of the original who had limited access to his abilities, but could not properly utilize his Phase 4 armored namesake. Many of the clones stayed in Phase 1 form, which made them look like skeletal degenerates which gave the impression that they were even weaker than they actually were. All of them could actually live up to the boast as being Grandis, however; due to the original Grandis having a Hive Mind mentality when more than one of him exists, the original Grandis was effectively able to control the actions of his clones to a certain extent depending on how much of a free will the clones had. One particular clone actually had so much free will that he had become an entirely separate individual under a different name, and became so powerful that he effectively acquired his own Phase 4 form in which he dubs himself the "Emerald Crusader". By the time The New '10s came to be, only Emerald Crusader and a single remaining normal clone remained, and the original Grandis was still in dormancy; any clone who was not outright confirmed to be deceased was automatically considered missing in action, and the fates of the latter are unclear to this day as a result.

"If you think Grandis is bad now, perhaps you might want to take a look at his younger self."

Grandis the last of the Titanus Units 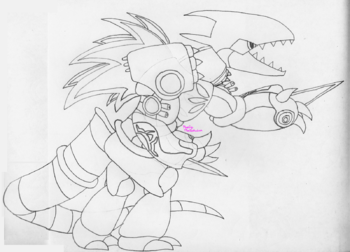 "The Shadow of Oblivion"

His namesake armor, in-person. Whenever the Titanus Unit is busted out, that's when the kid gloves come off with how in desperate need of absolute firepower Grandis needs at any given time. Sometimes, however, it isn't a portion of himself he can easily control, and the massive power high being hooked up to it's internal life-support systems while operating it can cause him to go absolutely ballistic beyond all rational reasoning. Grandis was the last of a mysterious line of robotic entities known as Titanus Units, which were designed with the sole purpose by Dr. Devoniak to render an entire species extinct with having the entire arsenal built around rendering the target an absolute joke by comparison. However, what was not anticipated was Grandis would have it's AI gutted out by the lone hominid who would later take his own name from this; in a fit of madness as to why his existence is considered so essential to the point all attempts to die have failed, Grandis hijacks the armor to make himself into it's vitality core as a means of ensuring he has absolute control over it by virtue of doubling as it's power source. 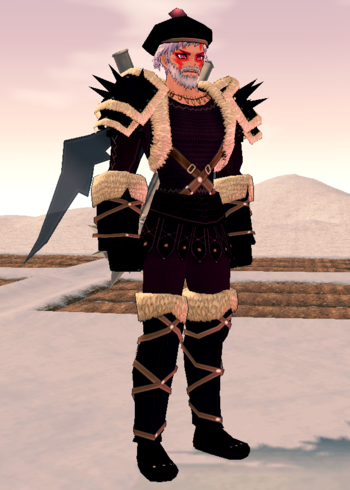 "Ya know all them times everyone and myself called me a "hillbilly", among other things? They were... half right, in regards to what I was actually called in ancient times. They called me a "hill giant", because I was so tall I would overlook the hills long before I reached the top. Of course, when the only interaction with civilization I had were among sentient small mammals, who could blame them for thinking I was that big?

Grandis is implied to at times be Formerly Fit in some capacity. The logical conclusion is none other than a seldom seen appearance of Grandis circa 30+ years ago, dubbed by the modern day Grandis as "Grandis Gigantis". His source of interaction with civilization was not through other humans, at least, not at this point in time. His grasp of human languages were... primitive, at this point. He interacted best with smaller animals, especially of the Mouse World variety, for reasons that are currently unclear. Evidence suggests that the nutrients needed to survive on Earth were far more abundant in the not too distant past, and these smaller animals had no short supply of what they had deemed "useless" prior to discovering Grandis, from which they used these salvaged nutrients as offerings for what, for all intents and purposes, they viewed as a Physical God in mortal form before their very eyes. By all accounts from modern day appearances, they were not wrong.