Weakness: Soul link devices, over-stimulation of his right eye, anything that targets his gouged out left eye hole, starvation. 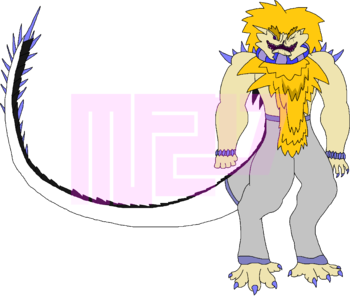 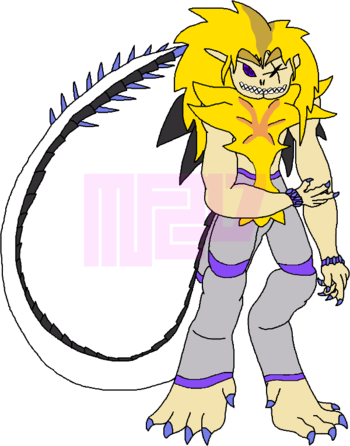 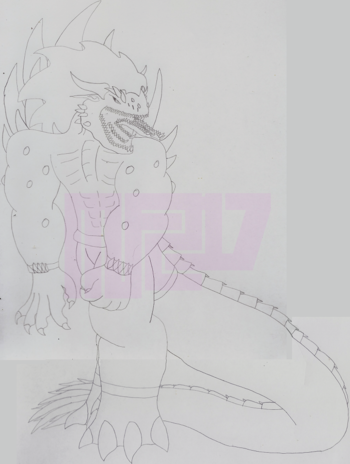 "A Mythical Warrior the great behemoth is! A giant bestial force of nature itself given a Deity's form! His arms pumped just like his immense heart, standing upon legs as strong as diamond, and a powerful mighty roar from which the Mythical Warrior cast out the Shark and the Bird upon the open Earth itself, and their followers cast out with them."

Originally a Bomberman OC under the name "Marty" with the intent of being a Digimon parody in regards to his multiple forms, Mirror M needless to say had quite the Early Installment Character Design Difference when he was first designed as MF 217's first actual OC of any kind. Ever since 2017, the design of Mirror M was being tinkered with over and over until MF217 could truly separate Mirror M entirely from his Bomberman routes, which ultimately turned out to be not so much hard but more so annoying due to Mirror M's unique design aesthetics required to pull it off. After many attempts thinking about it, MF217 designed Mirror M's Phase 1 form with a finishing touch of including traits from an old-world monkey called a "gelada" into Mirror M's design, which allowed MF217 to explain away certain inconsistencies with Mirror M's design as to why he ultimately looks oddly human-like in appearance without simply having the explanation be flat out, well, human DNA. As of 2018, the finalized Mirror M design is uploaded as you see it here, and forever the Bomberman ties were severednote (with a few exceptions such as requests from Bomberman fan artists such as this one

) and the character became forever known from this day forward as the one and only Mirror M.

A genetically engineered super-soldier based off of the found DNA of an alleged "Mythical Warrior" from Ultimorian legend. Many claim that because the Ultimorian Deities did not exist as a faction until the creation of Grandis, and thus the formation of the Big Three, many claim that Mirror M's ancient ancestor is the first true analog to Grandis himself, and even if it isn't, the DNA shown from Mirror M's battle prowess does not disappoint either way. Having a virtually unbeatable win record among the other Ultimorian Deities, Mirror M was designed as the ultimate result of Project Carthage, in which he was genetically engineered with inhuman DNA; only a single percentage of the DNA from his mysterious ancient form remains in his genetic code, but at the same time it's not the sole percentage of DNA from his original species in play; Mirror M claims upwards of 10% of his complete genome is his original species, but folks like Megalodon state it to be 25%, or if you're Dr. Devoniak, the guy who reconstructed him in the first place, an even smaller 5%.

His original life was an incarnation of a being called the "Mythical Warrior" from whom was considered to be the In-Universe Trope Codifier to what made an Ultimorian Deity as such; he displayed immense physical strength and power and overall capabilities, he had transcended the limitations of ordinary mortality, and he had drawn the attention of the greater powers due to his in-fighting with Darigus forcing Dragora Galaxia to appear to stop it, and thus the latter moment serves as the catalyst for both Mirror M and Darigus becoming Ultimorian Deities. Nowadays, his original incarnation is thought to be forever lost, considering Mirror M's status as a genetically engineered, supped up clone of him seems to have rendered almost all of his past memories null and void in terms of even existing. While he is the In-Universe Trope Codifier for the Ultimorian Deities, he did not officially become recognized as one until he is placed as the 6th member of the pantheon by a universal agreement between Grandis, Ultima, and Dragora.

In the non-canon You Have Entered The Uninvited World, Mirror M has both eyes intact, and achieve Phase 4 on his own with minimal difficulty; the identity of the Mythical Warrior is considered one in the same with Mirror M himself here, often just referring to "Omega Platinum" by Mirror M's standard name. An extra layer to his bio-suit is present, in the form of a long coat type of jacket, and Mirror M's walking posture in Phase 1 is disturbingly much more upright than it traditionally is known for in Citadel of the Heart proper.

Tropes that apply to Mirror M

A breathtakingly beautiful and immensely powerful Ultimorian Deity of the ancient past, preceding the creation of many of the modern day Ultimorian Deities by a long shot. A far cry from his mortal reincarnation of a clone, Omega Platinum's intelligence is unquestioned, but a different personality lies within Mirror M's cells from which Omega Platinum lies dormant. Originally having existed while the Earth was within the Hadean Era, a fierce battle against Ultima and Dragora Galaxia left Omega Platinum for dead and his blood spilt across the Sol system, and with it, the devastating results of his divine blood touching the still young planets in the system. Mercury's orbit would be rendered somewhat off, Venus' biosphere would be completely destroyed, and Earth's biosphere would actually be born in a violent mixture of a chaotic wasteland being forged from Omega Platinum's spilt blood. Remnants of Omega Platinum's blood survived as fossilized fragments, recently having been found inland across Antarctica, where a scientist known as "Franz" would discover them. Omega Platinum's consciousness had survived for billions of years without anyone even knowing, and used the last of his divine energy to gift Franz the knowledge of Enlightenment as a blessing upon seeing the nobility within Franz' soul.

Franz, both heartfelt and horrified by what he had discovered, began the creation of many things in his life that would reshape the entire world as everyone knew it. Franz was a nobody who couldn't fulfill his goal in life that any typical human man could ever accomplish; infertile, poor, and just being an errand boy for whomever is of greater power, Franz secretly began to work on a laboratory from which he intends to stay as far away from civilization as possible within France. In the process, Franz created a haven for beings like himself who have been blessed supernatural abilities through Omega Platinum's actions. Two specific creations would bare a blood relation to Omega Platinum. The first, and older, of the two would be Mirror M, reconstructed from various animal and human DNA samples based off of what Franz could understand of trying to recreate Omega Platinum's DNA sequence. The youngest, a young, pink haired girl known as "Aelita", who would serve as the daughter which Franz couldn't have had otherwise. The difference, though, is that Franz had to keep the existence of these two a secret; when Aelita had left the facility and was discovered, needless to say a turn for the worse began to happen.

Aelita's panic as Franz tried to calm her down during an intense confrontation with soldiers who wanted Franz' facility for themselves, Aelita's cells containing Omega Platinum's essence awoke and caused Mirror M to go ballistic, forcefully ascending him to the Omega Platinum form too early for his own good. Scared beyond all reason and confused like no tomorrow, Mirror M Phase 4 is born, and his outrage that his family is in danger unwittingly causes his incredible power to completely glass entire fractions of the whole European continent. Intense, powerful volcanism, earthquakes shifting the borders of the countries, and powerful, endless storms that plagued the entire side of the globe, ending in an implosion of Mirror M's own power being reabsorbed into himself all at once from each of these elements of chaos. In the process, Earth's orbit around the sun slowed, causing years to last 1.8 times longer than they did before, and Earth's axis tilt would alter so that all portions of the Earth would begin to experience seasons and snowfall. Even by the time of the 2030s, intense weather anomalies as a result of Omega Platinum's rebirth still occur and are no less as fierce as they were nearly 90 years ago.

Omega Platinum's second coming is due at some point in the inevitable future, though, as Grandis, Ultima, and Dragora Galaxia now occupy different portions of this particular universe, standing guard should the time arise where they will do battle against Omega Platinum once more. What none of them realize, however, is that even after having been effectively deceased for 4 billion years, Omega Platinum's intense power now eclipses all three of their own power combined, and none of them are any wiser about it due to other concerns that have recently been discovered...