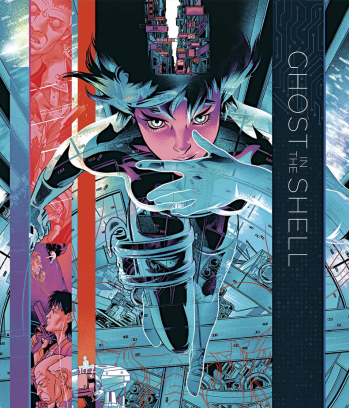 Ghost in the Shell, Mamoru Oshii's 1995 animated film adaption of Shirow Masamune's classic manga about a cyborg policewoman in Post-Cyberpunk Japan, condenses the original manga's plot by focusing entirely on the "Puppet Master" story. It also takes a much, much more serious tone than the manga, focusing on the series's psychology over most action hijinks. The film's visuals, action sequences, and large amount of both philosophical ponderings and technobabble all but defined Western conceptions of anime for the better part of a decade.
Advertisement:

The film's story takes place in a post-cyberpunk future where cybernetic bodies have become the norm and society conceptualizes a person's mind/soul as their "ghost". Major Motoko Kusanagi, a female cyborg and the leader of a covert government task-force specializing in cybercrime, leads her team on the hunt for a notorious hacker known only as "Puppet Master". The Puppet Master "cyber-hacks" the brains of innocent people and implants memories to turn them into his unwitting accomplices in various crimes.

The 2004 sequel, Ghost in the Shell 2: Innocence, revolves around Motoko's team working to solve a rash of murders involving berserk robots while dealing with her absence following the events of its predecessor. Innocence featured heavy usage of integrated CGI and cel animation — and it explored the Uncanny Valley even further than the first film.

A remastered version of the first film, Ghost in the Shell 2.0, saw the light of day in 2009; among other changes to the film, this version mixed in modern-day CGI with the original animation (in the vein of Innocence), all under the supervision of Oshii. A high-definition transfer of the original version came with the Blu-ray version of 2.0, and a separate high-definition "remaster" release of the original version showed up a few years later. A live-action American entry into the franchise that partially draws upon this film was released in 2017.

The Wachowskis cite the first film as a direct influence on the Matrix films — so much so that even the Wachowskis themselves think of Ghost in the Shell as The Matrix's spiritual predecessor.

Ghost in the Shell contains examples of the following tropes: