The character sheet for the characters of The Pirate's Fate. Beware of unmarked spoilers ahead.

The main characters of the game, a crew of Ragtag Bunch of Misfits seeking the coins in order to unite them and change the world for the better.
Tropes that apply to the crew as a whole 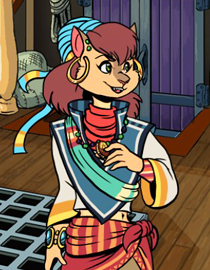 The hero of our tale.

Mila woke up among the Dread Pirates with no memory of how she got there. The feline protagonist of The Pirate's Fate, her decisions will transform her mind, her body, and the story itself. 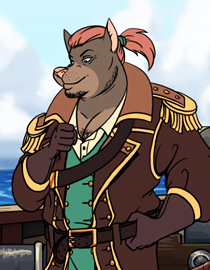 The (usually) respected captain of The Pirate's Fate.

The hound captain of the Dread Pirates, Darious sees himself as a treasure hunter. He's well-educated, kindhearted, and cunningly ambitious. 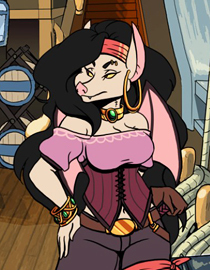 The first mate with a short fuse.

The first mate of the Dread Pirates, Morgana has no patience for the weak and no mercy for the disloyal. Step out of line on her watch, and this bat will make you walk the plank. 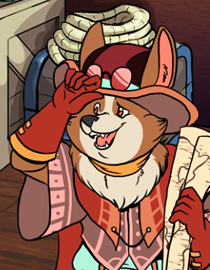 The Pirate Fate's own corgi cartographer.

Leeko was a merchant before being asked to become the Dread Pirates' corgi cartographer. His affability hides his cynicism and distrust of others. 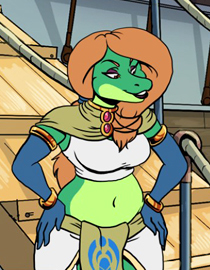 A tag-along that doesn't take "no" for an answer.

Tam-Tam claims to be many things, among others a capable adventurer. However, this lizard prefers to use her charisma and her seductiveness to get what she wants from those around her.

Not everyone seeking the coins have good intentions. This is a crew competing with the Dread Pirates in collecting all of the coins. 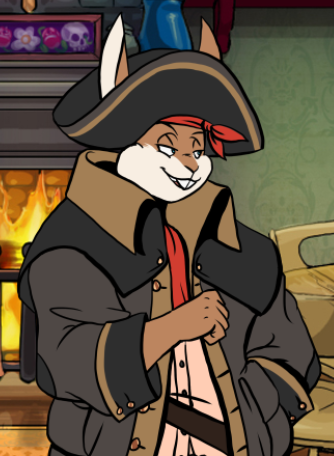 That rabbit's dynamite!
A rival captain, this rabbit is nothing at all like Darious; for starters, he's a genuine pirate of the Brute type, unafraid to bully, murder, extort, and generally leave destruction in his wake. When he hears Darious is after the coins, he decides that he's suddenly interested in them, too.
Brock
One of Rourkie's pirate crew, an African Gray Parrot, who has some ideas of his own.
Mary
One of Rourkie's pirate crew, a black sheep who very much enjoys her job.

The higher-ups within the kingdom, based out of Kittering Castle. 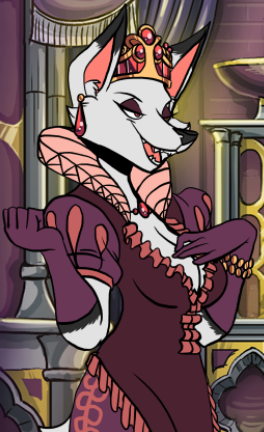 The wise and benevolent ruler. If she does say so herself.
The current monarch, younger of the two royal fox siblings. She's very insecure about her reign, and rumor has it that she's collecting the coins for her own ends. There's a slight problem with getting them from her, though: she's extremely paranoid, touchy, and hates pirates... so that could prove a problem.
Bilba
The queen's older sister, now returned and (according to Nakhta) plotting against her to overthrow her reign.
Anora 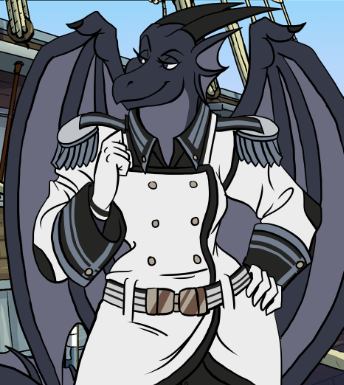 Surely the face of a trustworthy woman!
The Queen's right-hand dragoness, serving as both an envoy and, when need be, a bodyguard. There's something suspicious about her, though...
Jackie 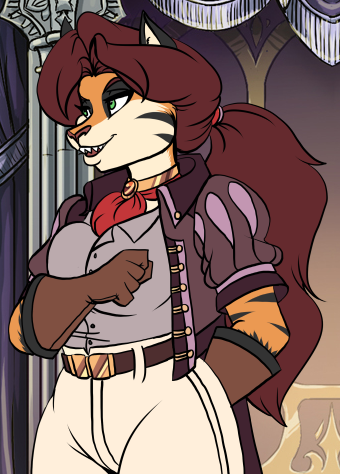 Tall, loyal, and a mouth full of shark teeth; what else could you ask for in a servant?
A female tiger and high ranking officer of Queen Nakhta's kingdom who appears in the Prisoner of Destiny DLC.

Mishell & Agatha
Should Mila refuse to work with the Dread Pirates at the earliest opportunity and be forced overboard by Morgana, she is rescued by this aquatic pair, who have a tumultuous relationship with Pirate "walkies".
Abbigail
The owner of a tavern that the Dread Pirates visit soon after meeting Mila. She knows the location of a supposed cache of coins, but worries for the safety of those that seek the treasure.
The Griffon
A large, intimidating beast encountered when the Dread Pirates search for coins at the Cursed Coast.
Circe
A seemingly kind old lioness who lives alone on a deserted island, living off of the land and taking care of the many diverse creatures living there. But it becomes quickly apparent that she's hiding something from all of her guests...
Duana
A self-proclaimed latter-day attendant of the Temple of Oastarie, Goddess of Beauty. This zebra will preach the glories of Oastarie to anyone willing to listen to the zebra.
Angie
A kangaroo professor who seeks to disprove the religion of Oastarie. But she may have some ulterior motivations for doing so...
Trento
A slightly pudgy, unethical bear whose pie shop is always busy with business.
Kate
A black cat with purple stripes that dreams of working as a chef for royalty. Is hiding more than she lets on.
Luprand
An old friend of Darious's, now working as the steward for the mysterious Mr. Lazerby.
Lazerby
A reclusive stag that lives in a run down manor on a hill. There are rumors that his place is haunted...
Breena
A shark woman from Atlantia, scholarly, fussy, and easily irritable.
Orvia
The demonic gatekeeper of Hell, a truly evil, horned...squirrel, who is bubbly, perky, and slightly vapid while incisive at the same time.
Sherry & Threyon 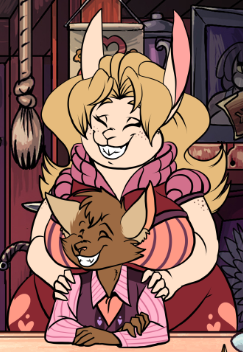 Because of the nature of these two characters, it's highly recommended to play the game on a few routes before reading. You have been warned.

Steamchaser
A mysterious lion in an old sailor's uniform, he has some ideas about your progress in finding the treasure.
Indigo Jack 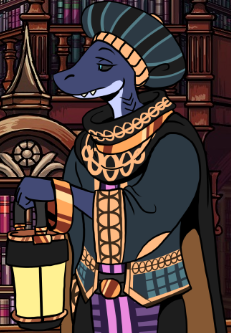 A snarky shark just trying to do his job.
The shark librarian and custodian of the Library of Forbidden Knowledge. He knows a lot more than he's letting on, and he doesn't hesitate to drop implications, moral judgments, and snarky jabs.