This page is for characters who do not physically appear in the books, play or Fantastic Beasts films, but have been mentioned in other canonical works, such as Pottermore, Fantastic Beasts and Where to Find Them (go here for characters from the film), Quidditch Through the Ages, The Tales of Beedle the Bard, J.K. Rowling's Official Site or from herself. A number of these are Canon Immigrants from the Wizard Cards found in the video games, but because these cards were written by Rowling herself, the information found in the games can be considered canon. Be warned: there are lots of spoilers.

A Scottish Rugby Union player who is supposedly a very talented Squib.

A Scottish Rugby Union player who is supposedly a very talented Squib.

A Scottish Rugby Union player who is supposedly a very talented Squib. He's actually a wizard.

Manager of the Welsh National Quidditch Team, and former Beater and Captain of the Holyhead Harpies. She was a member of the Slug Club while at Hogwarts.

A Dark Wizard and original inhabitant of the island that would become Azkaban.

A wizard infamous for cursing innocent people for no discernable reason and taking offence to anything and everything.

A 17th-century pure-blood witch and a member of the Irish branch of the House of Gaunt.

A wizard who was imprisoned in Azkaban.

An activist witch who wished to repeal the International Statute of Wizarding Secrecy, resulting in several stints in Azkaban for blatant use of magic in front of Muggles.

A legendary Dark wizard. His attempt to attack a wizarding village resulted in his defeat at the hands of Illyius.

A wizard who repeatedly engaged in Muggle-baiting pranks, some of which caused serious bodily harm to innocent Muggles and risked the Statute of Secrecy. When the authorities caught up to him, he became a spy for Dolores Umbridge in exchange for a lighter sentence... only to cause even more Muggle-baiting mayhem and be convicted. 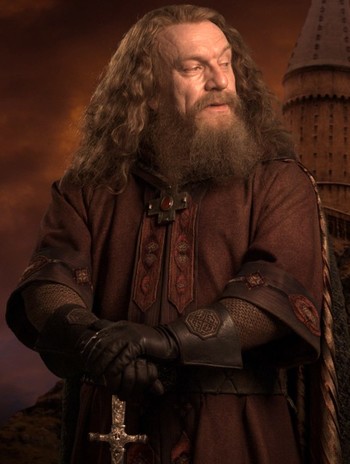 One of the four founders of Hogwarts, and creator of Gryffindor House. 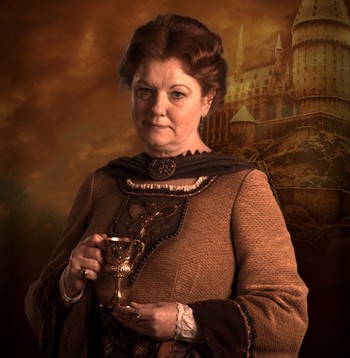 One of the four founders of Hogwarts, and creator of Hufflepuff House.
Rowena Ravenclaw 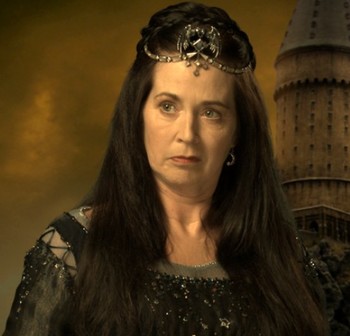 Played by: Lynne Pearson (Harry Potter and the Forbidden Journey)

One of the four founders of Hogwarts, and creator of Ravenclaw House. 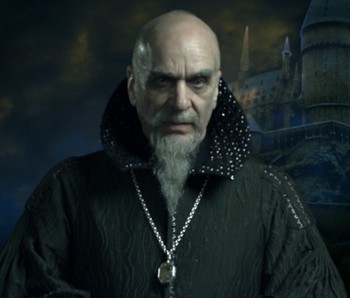 Played by: Ken Bones (Harry Potter and the Forbidden Journey)

One of the four founders of Hogwarts, and creator of Slytherin House and the Chamber of Secrets.

A South American witch and Headmistress of Castelobruxo during The '60s. 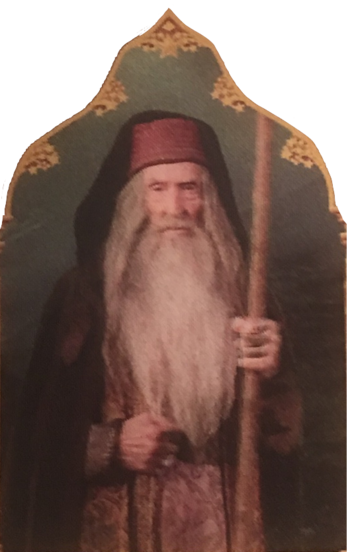 The most famous wizard of all time, Merlin was a medieval wizard who later served in the Court of King Arthur. The Muggle anti-discrimination society he helped found, the Order of Merlin, was eventually turned into an award by the Ministry of Magic to reward greatness achieved by those in the magical community. 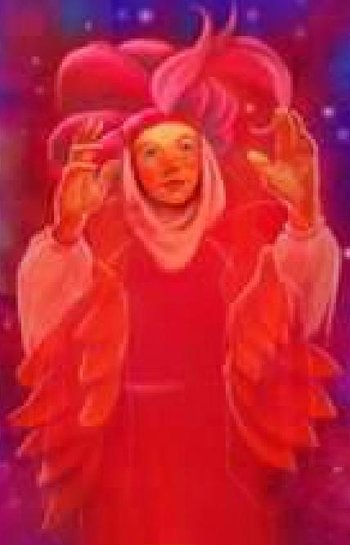 One of if not the most famous dark witch of all time, Morgan (also called Morgana) le Fay was a medieval dark witch, Queen of Avalon and half-sister of King Arthur. She was the enemy of the great wizard Merlin.

Harfang Munter
Durmstrang's second Headmaster.
Isolt Sayre
A witch from Ireland that, when young, was abducted by her aunt, Gormlaith Gaunt who killed her parents. When she is old enough to figure this out, she steals Gormlaith's wand and escapes to North America during its colonial period. Eventually she becomes a founder and co-headmistress of the Ilvermorny school of witchcraft and wizardry alongside her muggle husband, James Steward.
Rionach Steward
The daughter of Isolt Sayer and James Steward, twin sister of Martha Steward II.

As an adult, she became Ilvermorny’s first defence against the dark arts teacher. Not wanting to continue the Slytherin family line, she decided to not marry and remain single.

Nerida Vulchanova
A Bulgarian witch who founded the Durmstrang Institute in 1294.

An African politican and graduate of the Uagadou School of Magic, notable for replacing Albus Dumbledore as Supreme Mugwump of the International Confederation of Wizards in the first year of Voldemort's return.

Chieftainess of the Wizards' Council during the 17th century.

Harry's wizarding ancestors, from the Peverells to his grandparents.

"I'm not putting them on. I like a healthy breeze around my privates, thanks."

A British wizard and president of the activist movement Fresh Air Refreshes Totally, who refuses to wear Muggle clothes in public.

Founder of St Mungo's Hospital for Magical Maladies and Injuries.

A landlady and founder of the Leaky Cauldron.

An 18th-century plumber who hid the entrance to the Chamber of Secrets when the installation of a plumbing system at Hogwarts threatened its secret hiding place in what would later become the girl’s bathroom.

A wizard who was a world-renowned expert on Non-Human Spirituous Apparitions and the father of Remus Lupin.

Rionach Sayre (née Gaunt)
A 17th century-era Irish witch and member of the House of Gaunt who married fellow pureblood wizard William Sayre, with whom they had a daughter, Isolt. Despite this, the couple were charitable to Muggles, earning them the hatred of Rionach's sister, Gormlaith, an advocate of pureblood supremacy. Eventually, Gormlaith murdered the couple, but failed to capture Isolt, who managed to escape to the New World.
Violet Tillyman

A 19th-century British witch and husband of Albert Tillyman, infamous for her mysterious disappearance, a scandalous affair and misuse of the Floo Network.

The bassist of the musical group The Weird Sisters.

An American socialite and daughter of the Keeper of Treasure and Dragots for MACUSA. Her wand was stolen by Bartholomew Barebone, who took it to the No-Maj media, causing one of the largest breaches of the Statute of Secrecy in recorded history.

Orford Umbridge
The father of Dolores Umbridge. He was married to a Muggle woman, Ellen Cracknell, and worked as a janitor at the Ministry of Magic.
Uric, the Oddball
An eccentric and lunatic wizard that lived in the Middle Ages.
Angus Buchanan
A world famous squib known throughout both the wizarding and Muggle worlds.
Celestina Warbeck
A famous singer in the Wizarding World. Her songs are mentioned in the books occasionally.
Honoria
Dumbledore’s spinster aunt whom he mentions in Beedle the Bard. The only thing that’s known about her is that she broke off an engagement supposedly because her fiancé had a "hairy heart" (a Wizarding expression that means unfeeling). However, it's rumored that she actually broke it off because she caught him fondling horklumps.