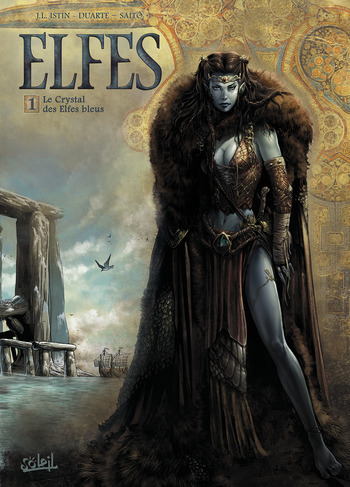 Elfes note "Elves" in English is a series of High Fantasy Comic Books. Born from the collaboration of French writers Jean-Luc Istin and Nicolas Jarry, Elfes is a collaborative series in which five pairs of writers and artists each present the story of a race of Elves inhabiting the fictitious world of Arran and cohabitating with other species and kingdom, Humans, Dwarves, Orcs and so on. These races of Elves are, in order of appearance:

The Elfes series, successful enough to span 21 volumes, sparked a Spin-Off series named Nains note "Dwarves" in English which likewise, follows stories centered around the five castes of the Dwarves. However, Nicolas Jarry is the only author but collaborates with five different artists for each caste:

A Spin-Off series named Orcs et Gobelins note "Orcs and Goblins" in English begun publication in 2017, again focusing on different protagonist but instead those being Orcs and Goblins, and at the same time misfits and other shady characters.

In 2019, a series named Mages began focusing on human Mages. Set after the defeat of the ghouls, Mages are indentured into the service of a Human Lord by law or face punishment by Order of Shadows.

Elfes and Nains contain examples of the following tropes: