Tropes that apply to all four turtles:

Rebecca Vincent: What are you?
Raphael: Let's just say we're four brothers who hate bullies — and love this city! 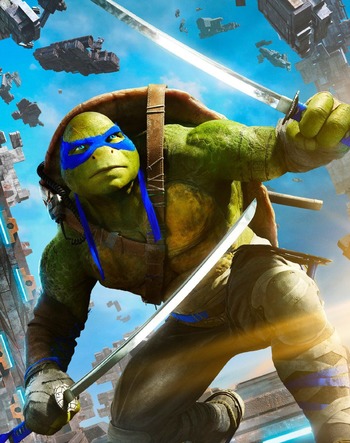 Portrayed by: Pete Ploszek (motion capture/Voice for second), Johnny Knoxville (Voice for first movie)
"We're turtles, whether you like it or not."
Raphael 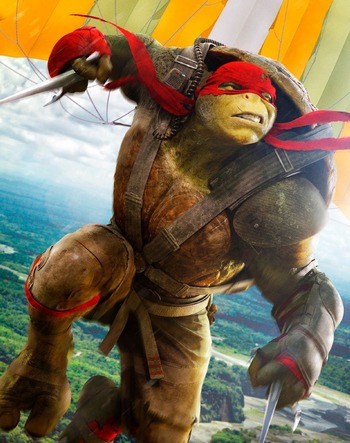 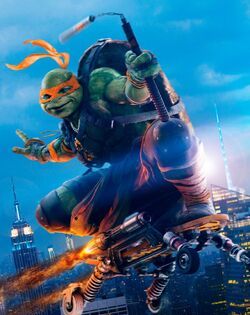 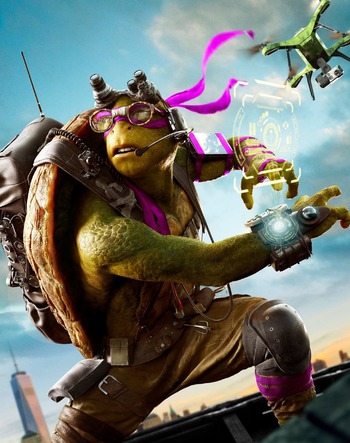 Portrayed by: Jeremy Howard
"Allow me to be the bad-ass for once."

Splinter
Portrayed by: Danny Woodburn (2014), Peter D. Badalamenti (Out of the Shadows)
Voiced by: Tony Shalhoub
"You will not lay a hand on my sons!"
April O'Neil
Portrayed by: Megan Fox
Leonardo: Wait a minute, Dad. All these years you told us we were rescued from the fire by a great guardian spirit, a hogosha.
Splinter: That's right. [points at April] And this is the hogosha.
Vernon Fenwick
Portrayed by: Will Arnett
Vernon Fenwick: You're a talking turtle...
Raphael: Yeah, and you're a human nerd.
Eric Sacks
Portrayed by: William Fichtner
"I'm going to be rich! Like, stupid rich!"
The Shredder
Portrayed by: Tohoru Masamune (2014), Brian Tee (Out of the Shadows)
"Tonight I dine on turtle soup!"

Karai
Portrayed by: Minae Noji (2014), Brittany Ishibashi (Out of the Shadows)
"We know you're out there! If you don't surrender, we start executing hostages!"

Bebop and Rocksteady
Portrayed by: Gary Anthony Williams (Bebop) and Stephen "Sheamus" Farrelly (Rocksteady)
Bebop: You're a rhinoceros!
Rocksteady: And you're a... I don't know what you are!
Bebop: [sees his reflection] Huh, I'm a little piggy?
Baxter Stockman: You're a warthog.
Casey Jones
Portrayed by: Stephen Amell
Rebecca Vincent
Portrayed by: Laura Linney
Krang
Voiced by: Brad Garrett
"I know what you're thinking right now, of all the ways you'd like to kill me. But that would require you out-thinking me. And no one, nothing is smarter than THE KRANG!"
Dr. Baxter Stockman
Portrayed by: Tyler Perry
"This is gonna be good!"

Alternative Title(s): Teenage Mutant Ninja Turtles Out Of The Shadows