The capital of the Lothal Sector, Lothal is a backwater agrarian planet in the Outer Rim with a diverse population. The Empire takes a special interest in its mineral deposits and begins increasing its troop garrison, which includes an Imperial Academy, as well as other interests such as Sienar Fleet Systems. The increase of rebel activity immediately earns the attention of the Imperial Security Bureau, the Imperial Inquisitorius, as well as Grand Moff Tarkin, Darth Vader, and the Emperor himself.

Lothal has a mysterious history, with a hidden Jedi Temple indicating it once had a connection to the Jedi Order. 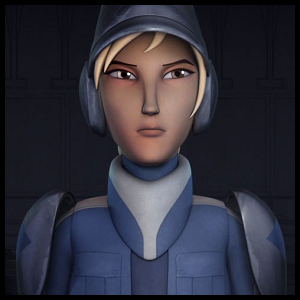 "I am merely a public official. I have no experience with such brutal tactics."

Voiced by: Kath Soucie
Appearances: Thrawn | Servants of the Empirenote The Cameo only | HoloNet Newsnote  mention only | Rebels
"You're a level five Academy student? Hmm. I was too, once upon a time..."

A native of Lothal, Minister Tua is an Imperial official in the local Lothal government, under the leadership of Governor Arihnda Pryce. Having been chosen by Pryce herself to lead as standing governor in Pryce's absence, she alongside Imperial Security Bureau agent Kallus and the Grand Inquisitor were responsible for putting a halt to the insurgency on Lothal, but to no avail. 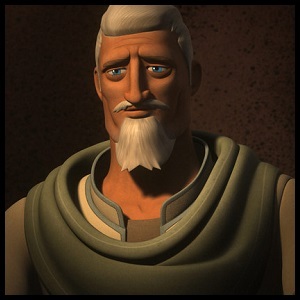 Voiced by: Clancy Brown
Appearances: Adventures in Wild Spacenote mention only | Thrawnnote  mention only | Rebels
"I couldn't see it before, but going to prison with the Bridgers started something. That something has grown bigger than I ever imagined. I owe it to them and I owe it to you to see it through to the end."

The former governor of Lothal, Azadi was accused of treason and imprisoned by the Empire after he supported the Bridger's radio broadcasts against the Empire. After hearing about the growing rebellion, Azadi, the Bridgers, and other prisoners staged a breakout, with Azadi escaping back to Lothal. 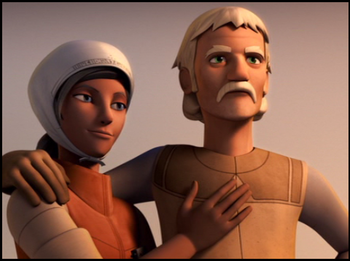 A couple that worked on a farm outside of Capital City. They were old family friends of the Bridgers, and when the Imperials destroy their farm and arrest them, the couple is helped by Ezra Bridger and Zeb Orrelios to escape custody. Sumar and his wife were later part of a small group of Lothal Rebels who formed under former Governor Ryder Azadi to resist the Imperial occupation of Lothal. Sumar made the notable contribution of infiltrating the labor force of the Lothal Imperial Factory and working with others to sabotage equipment. 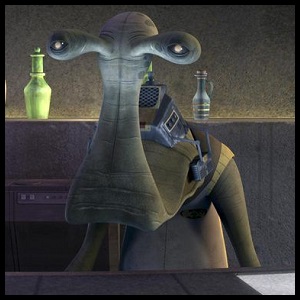 A elderly Ithorian who runs Old Jho's Pit Stop at a small spaceport on Lothal. He is anti-Imperial and friendly with the crew of the Ghost. 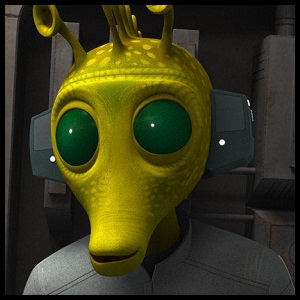 A Rodian citizen on Lothal who was friends with Ezra Bridger's parents. After their disappearance, he joined the Imperial Information Service to gain information on their whereabouts, but was turned into a cyborg worker for the Empire. After escaping from the Empire, he was found by Ezra and the crew of the Ghost, who sought to get him to safety. 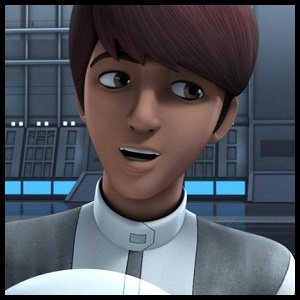 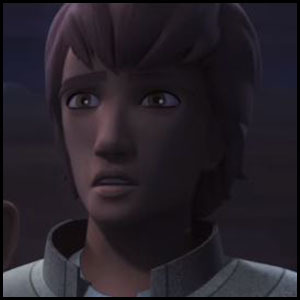 Voiced by: Dante Basco
Appearances: Servants of the Empire | Rebels
"Well, the seniors will have to wait. Time for this cadet to hit this luxurious featherbed."

A young cadet at the Imperial Academy on Lothal, Kell was identified as a potential Force-sensitive by the Inquisitor due to his performance. He befriended Ezra, who was undercover as cadet Dev Morgan. 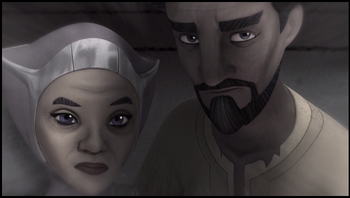 Voiced by: Dee Bradley Baker (Ephraim), Kath Soucie (Mira)
Appearances: Adventures in Wild Space | Rebels
Ephraim: You are going to need to stay strong. Can you do that, son?
Mira: Remember Ezra, without hope, we have nothing.

Ezra Bridger's parents, who spoke out against the Empire and were arrested when he was seven years old. 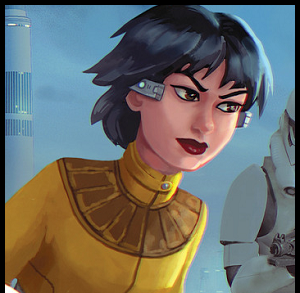 Appearances: Servants of the Empire
"I'm sorry, Zare, I... I don't want things to be weird. We're... we're teammates. And friends. I want us all to be friends."

A young teenage girl from Corulag who moved to Lothal with her parents. She befriends Zare Leonis and Beck Ollet, becoming instrumental in helping the former find his sister, Dhara, due to her expertise in slicing.

Appearances: Servants of the Empire
"The more the Empire tightens its grip, the more people will feel the squeeze — and realize it's fight back or be crushed. A real resistance will emerge. And when it does, they'll need people on the inside, who can help them."

A classmate and friend of Zare Leonis and Merei Spanjaf. A born and raised Lothalian, he grew frustrated when his parents sold their homestead and jogan farm to the Empire, who would then use it to strip mine.

Appearances: Rebel Bluff
"I thought, if a kid wasn't afraid of defying the Empire, then I shouldn't either."

A former employee of the Imperial Mining Institute who deserted the Empire after becoming inspired by Ezra Bridger's broadcast against the Empire.

Appearances: Servants of the Empire | Rebelsnote  mention only
"It really is you, Zare. I'm so tired but I don't want to sleep. I'm afraid I'll wake up and this will all have been another dream."

The older sister of Zare, Dhara was enrolled in the Lothal Imperial Academy in officer training until she suddenly went missing. The Empire had discovered she was Force-sensitive, and the Grand Inquisitor kidnapped her and transported her to Arkanis, where she was placed in Project Harvester and tortured in an effort to break her into becoming an Inquisitor.

A neighbor of the Leonises and being the son of Pari Bunkle and an unidentified man, who were two researchers in the Ministry of Agriculture, Ames enrolled in the Lothal Imperial Academy alongside Dhara, though he was in Stormtrooper training. However, by the time he graduated, he was devoid of emotion and character but loyal to the Empire. 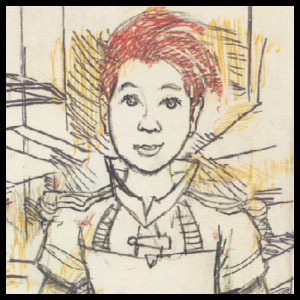 Appearances: Ezra's Gamble
"We’re going to live with my grandmother. I tried to send a message to you, but ... I’m sorry. Everything happened so fast."

A girl that befriended Ezra during his street urchin days. When the Empire took her family's farmland, they decided to move to Alderaan to live with her grandmother. 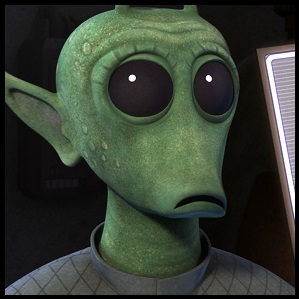 A Rodian who, while a factory worker, was also an informant for Lieutenant Lyste in exchange for protection. 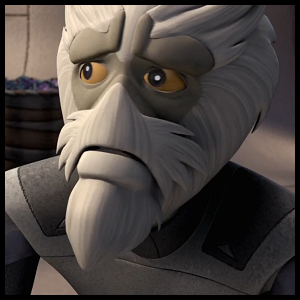 Voiced by: Liam O'Brien
Appearances: Rebels
"I remember what it was like before your ships showed up, before you Imperials ruined Lothal like the rest of the galaxy."

A elderly man who makes a living selling fruit in the streets of Lothal City. He was harassed by Commandant Aresko & Taskmaster Grint and nearly faced arrest until Ezra distracted them by impersonating an Imperial officer and claiming there was a false code red emergency. Yoffar expressed gratitude for Ezra's timely rescue, but was annoyed when it turned out the boy only did it to steal his fruit.

Appearances: Servants of the Empire
"Let that be a lesson for you, my dear. Never underestimate the power of poetry."

An old poet and painter from Lothal. His artistic expressions met adversity with the Empire, resulting in him getting an arrest warrant under the Imperial directive, Operation Guiding Light and was thus forced into hiding. He sought safety from the help of the Gray Syndicate, but after Merei's actions resulted in the disbandment of the organization, she and Old Jho helped spirit him away to Garel to live alongside her and her allies after the rescue of Dhara Leonis.

A married couple of data-security specialists from Corulag who were contracted by several Imperial ministries to boost the security of their data networks. One series of data networks they are to monitor is on Lothal, where they move to with their daughter, Merei. Jessa would become part of an anti-intrusion team assigned to investigate a breach in the Transportation Ministry's data network, which unbeknownst to the couple, was actually created by Merei herself.

Appearances: Servants of the Empire
Tepha: Don't talk about war, either of you. I want you nice and safe, Dhara, and far from any kind of battlefield. And that goes for you, too, Zare.

A married couple of agricultural scientists that worked under the Trade Federation before the rise of the Empire. Due to their work, the family often moved between planets, most recently settling on Lothal.

A nanny droid that had belonged to the Leonis family for generations.

A Xexto pawnshop owner and pickpocket, also an experienced dealer in the criminal underworld and a frequent hirer of Ezra Bridger prior to the Lothal insurgency. At one point, he sold tickets for an illegal fighting event, Gladiator Night.

An elderly Duros man that coached the Junior Academy of Applied Sciences' grav-ball team, the AppSci SaberCats, known for his conservative tactics and strategies.

A young, orphan girl from Tarkintown. 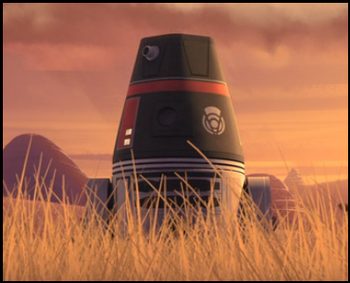 An Imperial astromech droid. Due to the destruction of the local Imperial communications tower on Lothal during the rebel insurgency and the early stages of the Imperial lockdown on Lothal, the Empire resorted to courier droids such as 264 carrying information around. In order to access information on the whereabouts of fellow teammate Kanan Jarrus, who had been captured by the Empire, the Ghost rebel crew sent in their own astromech, Chopper, to replace 264 and infiltrate an Imperial cruiser for information. 264 ended up on relatively positive terms with the crew, but was kicked out by Chopper after the mission. He would ultimately take on a simpler life on Lothal, choosing not to return to the Empire.

A couple that owned a mining company, Pryce Mining, on Lothal in the early years of the Empire. Their company was passed down to Arihnda Pryce, who wished to bring the company to the Core Worlds. However, this would mean selling the company. When Arihnda's mother was arrested under a false charge of embezzlement, Arihnda made a deal with Senator Renking to free her in exchange for selling the company to the Empire and becoming his senatorial assistant on Coruscant. In addition, Renking gets Talmoor and Elaiyne new jobs as a foreman and assistant manager on Batonn's Creekpath Mining and Refining complex near Paerogosto City, causing the couple to relocate to Batonn.

A shareholder of the Pryces' mining company.