Lothal Garrison
A backwater agrarian planet in the Outer Rim, the Empire takes a special interest in its mineral deposits and begins increasing its troop garrison, which includes an Imperial Academy. As Governor Tarkin notes, these resources are vital to fueling the Imperial Military. Planets in this sector include Lothal and Garel.

See his entry on the Lothal page.
Arihnda Pryce 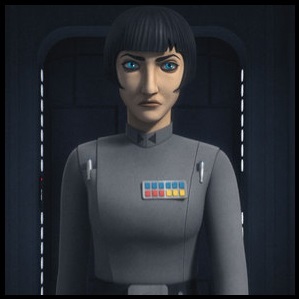 Voiced by: Mary Elizabeth McGlynn
Appearances: Thrawn | Servants of the Empire | HoloNet Newsnote mention only | Rebels
"They fight so hard to gain so little."

The Imperial governor of the Lothal Sector and a close ally of Grand Admiral Thrawn. Having hailed from her family-owned mining company on Lothal, she sold the company to the Empire, allowing the Empire to exploit her homeworld in order to advance her career, starting as a senatorial aide to Senator Renking.

See his entry on the Imperial Senate page.
Maketh Tua

See her entry on the Lothal page. 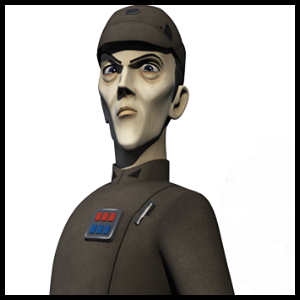 Voiced by: David Shaughnessy
Appearances: Servants of the Empire | Rebels | Rebels Magazine
"There is no friendship in war."

An officer in charge of supervising Imperial Operations on Lothal. 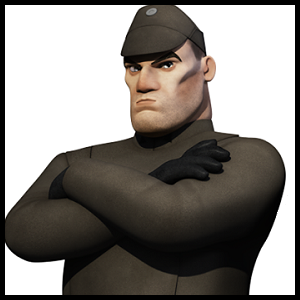 An officer in charge of supervising Imperial Operations on Lothal.

A ruthless officer who values technological advancement and utter loyalty as the keys to military strength, as well as an official of the Empire's Security Ministry on Lothal, Roddance is suspicious of Zare Leonis' presence in the Lothal Academy, noting his numerous connections to rebel elements. 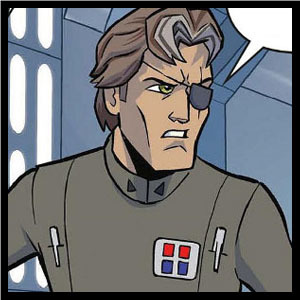 "I'm glad you remembered something I taught you — about never giving up."

Appearances: Rebels Magazine
"You did well, Kallus — but not well enough. Next time, remember that and you may save yourself the embarrassment."

An Imperial officer stationed on Garel. He was an old friend of Kallus back in the Imperial Academy on Coruscant. Due to playing the Imperial system to secure wealth for himself, this gets him charged with treason and taken to the nearby world of Lothal, where, coincidentally, Kallus is currently stationed.

Appearances: Servants of the Empire
"Everything that's happened will be investigated, and if there's been wrongdoing it will be punished. But I will do my duty."

An enthusiastic officer transferred from the Marleyvane Imperial Academy to Lothal's Academy for Young Imperials with Sergeant Currahee. He befriends Zare Leonis, a young cadet secretly infiltrating the Empire to discover the fate of his older sister. 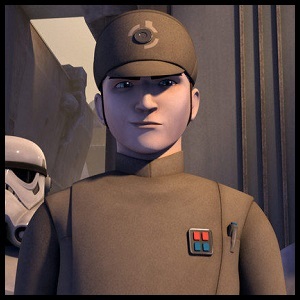 Voiced by: Liam O'Brien
Appearances: Servants of the Empirenote cameo only | Rebels
"Get those crates out of here! Keep them secure at all costs!"

Hailing from the neighboring Outer Rim world of Garel, Lyste is the overseer of inventory and distribution of weapons and supplies on Lothal.

An officer transferred from the Marleyvane Imperial Academy to the Lothal Academy with Lieutenant Chiron, in charge of training cadets. 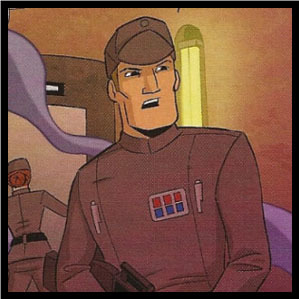 An Imperial officer that attempted to defect with Swain after the Siege of Lothal.

See his entry on the Imperial Navy page.
Hiram Zataire

See his entry on the Imperial Navy page.

See his entry on the Crew of the Ghost page.
Herdringer

An Imperial Security Bureau lieutenant. In actuality, Herdringer is dead. The man that claims to be him is his subordinate, Lieutenant Jenkes, who killed him and stole his identity. 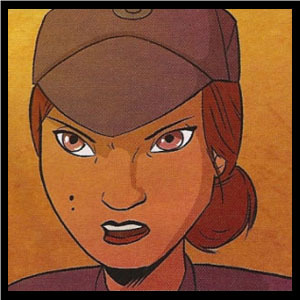 Appearances: Rebels Magazine
"Kallus won't stop until we're either captured or dead. Trust me. I was training to be an ISB agent. They're relentless."

An Imperial officer that underwent ISB training under Agent Kallus's tutelage, but after witnessing the horrors that the Empire was willing to commit in the time between and during Grand Moff Tarkin and Darth Vader's presence on Lothal, she attempted to defect soon afterwards with fellow officer Cogon, with the assistance of the rebel sympathizer, Senator Tural. 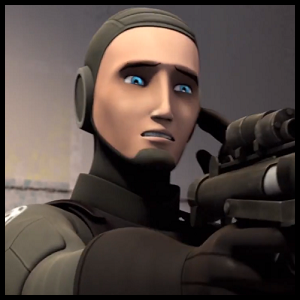 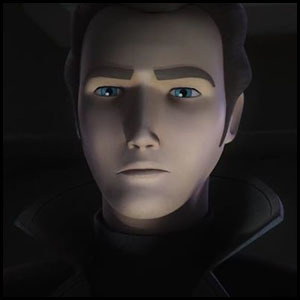 Voiced by: Greg Ellis
Appearances: Ezra's Gamblenote only in novelization of "Property of Ezra Bridger" | Rebels
"Get your hands off my craft! This fighter is property of the Empire!"

See his entry on the Lothal page.
TK-626 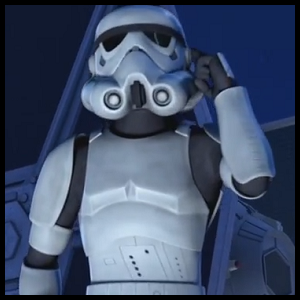 TK-626 is a stormtrooper who served the Galactic Empire on Lothal. TK-626 was a hardened school bully who was specifically recruited by the Empire due to his aggressive tendencies. He's partnered with MB-223. 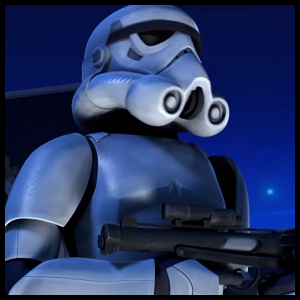 MB-223 is a Stormtrooper who served the Galactic Empire on Lothal. He's partnered with TK-626. 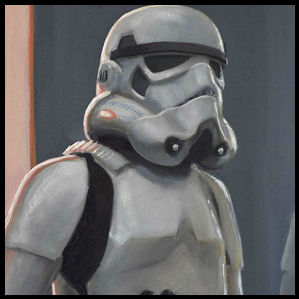 TK-462 is a Stormtrooper who served the Galactic Empire on Lothal. Originally from Eriadu, he ran away from home once he was of age to enlist in the Junior Academy on Phelar, wishing to avenge the death of his younger sister, Xea, caused by rebels. He would later graduate out of the Imperial Academy of Eriadu and eventually request a transfer to Lothal to deal with rebel activity that had sprouted there a year before his transfer to the world.

See his entry on the Lothal page.

See her entry on the Lothal page.
Zare Leonis 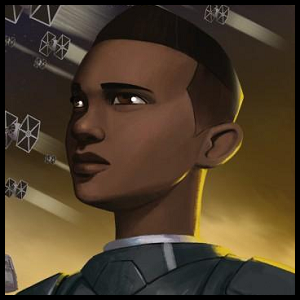 Voiced by: Bryton James
Appearances: Servants of the Empire | Rebels | Rebels Magazine
"I will enter the Academy, say the right things, and succeed. I will learn how the Empire works. I will find Dhara. And I will wait for the resistance to develop, for someone to rebel. And then I will help those rebels bring the Empire down."

An Imperial cadet in Unit Aurek of Squad LRC077 at the Lothal Imperial Academy. He secretly hates the Empire, and is only operating as a Cadet in order to find out what happened to his sister Dhara (who was also an initiate to the academy, but disappeared under strange circumstances). He teams up with an undercover Ezra Bridger to rescue fellow Cadet Jai Kell, who is planned to be kidnapped by the Grand Inquisitor.

See his entry on the Lothal page.
Nazhros Oleg 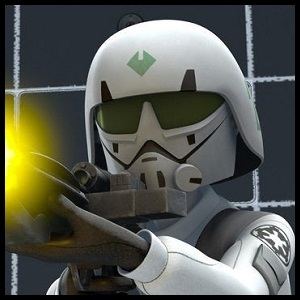 Voiced by: Eric Lopez
Appearances: Servants of the Empire | Rebels
"We are Imperial cadets, acting on behalf of Governor Pryce. You're in violation of the law. I might allow you a grace period, but you have to give me something in return."

An Imperial cadet from Eufornis Minor who attends the Lothal Imperial Academy and is a member of Unit Aurek of Squad LRC077, the same squad Ezra Bridger would be a member of when he infiltrates the Academy.

The son of two Imperial Army officers, he was an Imperial cadet who attended the Lothal Imperial Academy as a member of Unit Aurek of Squad LRC077. However, due to being unable to handle the two week orientation before official training, he dropped out and was replaced by Dev Morgan, who was really an undercover Ezra Bridger.

See her entry on the Imperial Death Squadron page.