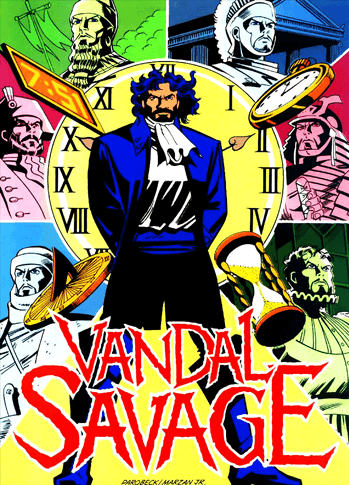 "Send me your superheroes from past, present OR future. I'll kill all of them."
— Vandal Savage, DC One Million Vol. 1, #2
Advertisement:

Since then he has appeared throughout history under different aliases and in different positions of power among different empires, all to further his own aims of eventual global conquest. Due to his immortality, he's had several lifetimes to acquire great combat, military, tactical and leadership skills, and is vastly knowledgeable in the world's history, sciences, arts and technology—adding to this, in all versions of the character, the meteor's power also gave him Super Intelligence. On top of that, he also possesses superior physical strength and endurance, can regenerate from almost all wounds, is versed in magic, and is able to create inter-dimensional warps.

Savage made his first live-action appearance in the Arrowverse played by Casper Crump in a crossover between The Flash (2014) and Arrow that set up his role as the Big Bad for Legends of Tomorrow.