Characters / Adventures of the Gummi Bears

open/close all folders
The Gummi Bears of Gummi Glen
The primary protagonists of the show, these six Gummis are the sole remaining descendants of those Gummis who volunteered to stay behind in Gummi Glen and maintain the warren in hopes that someday humans and Gummi Bears could live in peace. 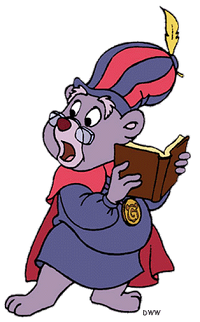 Oldest of the Gummi Glen Gummi Bears, Zummi is the resident keeper of lore and wisdom, but he's not too good at his job. When Cavin unlocks the Great Book of Gummi, he eagerly starts studying it, hoping to add talents as a wizard to his skills. Unfortunately, his absent-mindedness, verbal stammer and general inexperience means he is rather lackluster in that field. 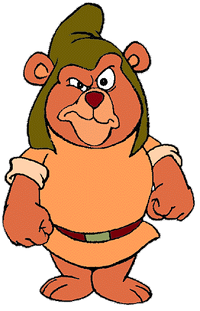 Surly, tough, stubborn, strong-headed, conservative, opinionated and practical, Gruffi's age may be indeterminate, but he's unquestionably the Team Dad of the Gummi Glen. Whilst Zummi worries about ancient Gummi Lore and Grammi keeps food on the table, he looks after the safety of his little family and is determined to keep them all alive. 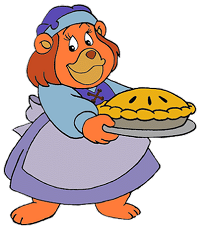 One of only two female Gummis left in Gummi Glen, Grammi is the cool, patient counterpart to Gruffi's hotheaded aggressiveness. She alone holds the magical secrets of Gummiberry Juice. Her age is indeterminate; her name is a pun on "Grammy"note a familial nickname for one's grandmother and one episode has her and Zummi reference about playing in Gummi Glen as children, but she doesn't look as old as Zummi does, and her interactions with Gruffi make it easy to see them as not just the figurative parents of "the cubs", but also their literal parents.

Voiced by: Lorenzo Music
Dubbed in French by : Roger Crouzet 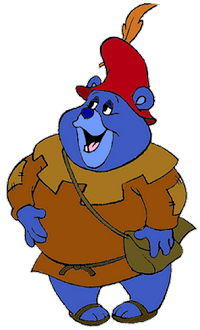 Tummi occupies a nebulous position in the Gummi Glen Gummis; clearly older than Sunni and Cubbi, he is still referred to as part of the "cubs" by Gruffi, Grammi and Zummi. A laidback layabout with a bottomless pit for a stomach, Tummi has little ambitions in life beyond lazing around, eating, and pursuing his various small hobbies, but he's not afraid to throw his weight around for the good of his family when needed.

Voiced by: Katie Leigh
Dubbed in French by : Françoise Vallon 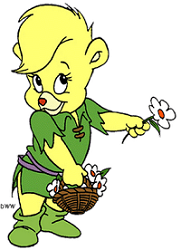 The only other female Gummi still residing in the Glen, Sunni is the "middle child" between Tummi and Cubbi. She has a naturally positive demeanor and upbeat manner, but occasionally gets caught up in flights of fantasy.

Voiced by: Noelle North
Dubbed in French by : Monique Thierry 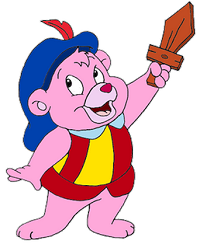 Filled with the inexhaustible courage of the young, Cubbi is the youngest Gummi in the Glen, meaning that unless the Glen finds new Gummis, someday he'll be the Last of His Kind. Adventurous and outgoing, Cubbi yearns to be a Gummi Knight. 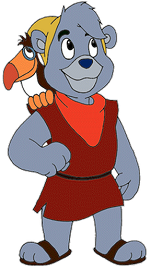 A Gummi discovered on a nearby island, left alone for most of his life, Gusto has gone rather...peculiar. Lost in his own world where he pursues his artistic desires, he remains aloof from the Gummis of the Glen, who accept that he's just too free spirited to really settle back in with them. 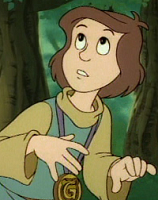 A page from the nearby human kingdom of Castle Dunwyn, Cavin is the most loyal friend the Gummis have, constantly trying to juggle his duties as a page and his need to help the Gummis out, all whilst preserving the secret of his friends. 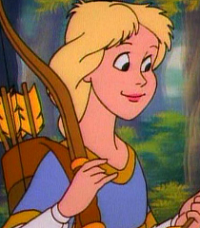 Voiced by: Noelle North
Dubbed in French by : Françoise Vallon 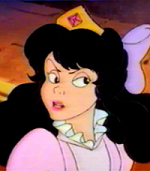 The Gummi Bears of Barbic Woods

A small clan of Gummi Bears who settled in the Barbic Woods, these Gummis have degenerated far more so than their counterparts in Gummi Glen, forgetting all aspects of Gummi magic and technology. All they retain is the knowledge that their kind were persecuted by humans, and a burning desire to make humanity pay for them. Even after the Gummi Glen Gummis show them the error of their ways, they prefer their more feral lifestyle, as they feel it makes them stronger and more capable than their ancestors were. 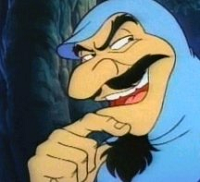 Voiced by: Michael Rye
Dubbed in French by : Max André

A powerful, intelligent, ruthless and ambitious Black Knight who yearns to depose the King of Dunwyn. Having accidentally discovered that Gummi Bears are not only real, but still exist, he's determined to exploit them to his own advantage, be it by forcing them to brew up gallons of Super Strength-bestowing Gummiberry Juice for his ogres or just capturing ancient Gummi technology/sorcery and using it as a Secret Weapon.

The smallest but smartest of the ogres serving Duke Igthorn, Toadwart is Igthorn's loyal retainer and lickspittle. 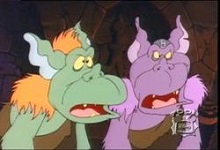 Voiced by: Will Ryan

Hulking, powerful but stupid goblin-like creatures who loyally obey Duke Igthorn. The two most prominent ones, shown in the picture here, are named Gad (the purple one) and Zook (the green one).

Voiced by: Tress MacNeille
A wicked sorceress who is in possession of a Gummi Medallion much like Zummi's, and craves any power she can get her hands on. She is served by her jackal-like Troggles and, on occasion, Duke Igthorn, whose crush on her she finds very annoying. In the episode "Rocking Chair Bear", it is discovered that she is in reality extremely old and uses magic to keep herself young.