Music / The Who
aka: Pete Townshend 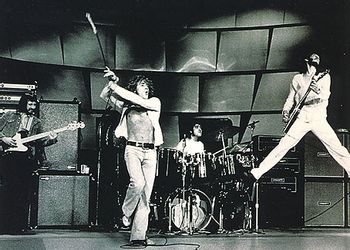 The Who during their heyday. From left to right: John Entwistle, Roger Daltrey, Keith Moon, and Pete Townshend.
"People try to put us d-down
Just because we g-get around
Things they do look awful c-c-cold
I hope I die before I get old"
— "My Generation"
Advertisement:

A famous, groundbreaking British rock band from Shepherd's Bush, London, known both for their many influential songs and for their pioneering of the art of instrument destruction

. They are so influential that when people talk of the great rock bands of The British Invasion, it's often The Beatles, The Rolling Stones, The Who, and The Kinks in the same breath. But of the four, only The Who actually spawned a whole musical genre. Don't take our word for it: Johnny Rotten, Johnny Ramone, and Joe Strummer (to name only three) are on record as saying something like, "If not for The Who..."

The band was founded by Roger Daltrey as the Detours in 1959. After several line-up changes, by 1961 Daltrey (who played guitar in the band) recruited schoolmates John Entwistle on bass and Pete Townshend on guitar. With Townshend on guitar, Daltrey dropped the instrument and shifted to singing. They became The Who in 1964 after hearing of another band also known as The Detours. After firing founding drummer Doug Sandom, the band enlisted Keith Moon mid-gig. The group then spent a while beating around the bush as a mod-rock act, changing their name to the High Numbers and then back again to the Who. They finally struck gold in 1965 with the singles "I Can't Explain", "Anyway, Anyhow, Anywhere" and the classic "My Generation". The album of the same name, however, was a rushed affair that generally lacked memorable songs. Guitarist and primary songwriter Pete Townshend had more ambition though, and included the 9-minute "mini-opera" "A Quick One, While He's Away" on the album A Quick One, which was released the next year (and also featured the single "Boris the Spider", written and sung by Entwistle), as a taste of things to come.

Their first breakthrough was the 1967 Concept Album The Who Sell Out, which included their first Top 10 hit in the US, "I Can See for Miles". This, plus their appearance at the Monterey Pop Festival, marked their breakthrough in the US. In 1968, Townshend became a convert to the teachings of Meher Baba, an Indian guru who preached a gospel of love, pantheism, and music as the key to understanding the universe. Inspired by his new religion, and the rejection of psychedelic drugs that it called for, Townshend wrote what many consider the Who's best — the famous Rock Opera Tommy in 1969, about a deaf, dumb and blind kid who sure plays a mean pinball. The tour in support of this album, which took the band to Woodstock and often featured them performing Tommy in its entirety, established them as one of the most dynamic and exciting live acts of their day. Around this time Townshend conceived an epic project called Lifehouse, a story set in a Crapsack World led by an authoritarian government in which hundreds of people gather at a concert and ascend to a higher plane of existence through The Power of Rock. However he over-exerted himself this time, and the absence of manager/co-producer Kit Lambert (who convinced the band about the Tommy concept) to explain just what the fuck Pete wanted ended up killing the project until it resurfaced as a Townshend solo album in 2000. Instead, the Who regrouped in 1971 with producer Glyn Johns and reworked the songs written for Lifehouse to produce Who's Next. Who's Next reached #1 on the UK charts, #4 in the USA, was critically acclaimed and contains some of their best-known songs: "Won't Get Fooled Again", "Baba O'Riley" and "Behind Blue Eyes".

After a quick break, The Who recorded another Concept Album/Rock Opera, this time about a mentally ill teenager named Jimmy and his conflicts with his family and friends during the height of the mods-rockers conflict in the 1960s. Named Quadrophenia, it was released in 1973 to critical acclaim, and spawned another hit with the ballad "Love, Reign O'er Me". During the supporting tour, which proved less impressive and more problematic than the Tommy tour due to an increased reliance on then-primitive synthesizers and backing tapes, a famous incident occurred on 20 November 1973 in San Francisco, when Keith Moon passed out twice during the performance due to tranquilizers (the put to sleep large animals kind of tranquilizers), the first time returning after a half-hour delay, and the second time he was carried off. After playing "See Me, Feel Me" with Daltrey on tambourine, Townshend asked "Can anybody play the drums? I mean someone good!" An audience member, Scot Halpin, filled in for the three-song encore and did a pretty good job. When interviewed by Rolling Stone, he noted: "I only played three numbers and I was dead".

The Who began faltering after this period, as a result of Keith Moon's addiction to drugs and alcohol and Townshend's depression, which resulted in 1975's bleak The Who by Numbers, full of songs about self-loathing, alcoholism, middle-age, and fear of irrelevance, lightened by the Top 10 hit "Squeeze Box". The same year a movie version of "Tommy" was released with an all-star cast under Ken Russell's direction. The move away from concept albums and epic rock operas continued with the stripped-down Who Are You, released in 1978, which again climbed up the charts (higher in the US than the UK) and spawned a hit single, "Who Are You".

However, one month after the album's release, Keith Moon died after accidentally overdosing on Heminevrin, a drug he had been prescribed to treat alcohol withdrawal. (He had taken to downing them by the dozen and mixing them with alcohol; 26 undigested pills were found in his stomach during his autopsy.) He was replaced by Kenney Jones of The Small Faces and Faces, who lacked Moon's characteristic hyperactive drumming style, with John "Rabbit" Bundrick unofficially added as the band's keyboardist, a position which Townshend (and occasionally Nicky Hopkins) had filled in the past. With Jones, they recorded two more albums: Face Dances in 1981 and It's Hard in 1982, which suffered from uninspired songwriting, the only notable songs being "You Better You Bet" and "Another Tricky Day" from the former, and "Athena" and "Eminence Front" from the latter. Finally, in December 1983, Townshend issued a public statement that The Who had disintegrated.

The Who first reunited for a one-off performance at Live Aid in 1985, and they again briefly in 1988. That was to be the last time Kenney Jones appeared with The Who, they went their separate ways shortly after. A 1989 anniversary tour followed, where, citing an inability to play electric guitar due to hearing problems, Townshend recruited a large backing band (similar to the one he'd played with in The Deep End), including a lead guitarist (Steve "Boltz" Bolton), a drummer (Simon Phillips, who previously played on Townshend's Empty Glass) and a percussionist (Jody Linscott), three backing singers and a five-piece horn section, and mainly played acoustic guitar instead. During this tour, the band regularly performed Tommy in its entirety for the first time since 1971. The tour ended up damaging the band's reputation quite badly due to the over-expanded backing band and the slick and overstuffed arrangements that resulted, earning it the derisive nickname "The Who on Ice". In 1991, the band recorded its last single with John Entwistle, a cover of Elton John's "Saturday Night's Alright (For Fighting)" released on the Elton tribute album Two Rooms.

1996 saw the band's next tour — a similarly large-scale production of Quadrophenia, featuring guest vocals by Billy Idol, Gary Glitter, and others, and the first appearance of Zak Starkey, son of Ringo Starr and childhood protégé of Keith Moon, as the group's regular drummer. Beginning in 2000, the Who returned to touring as a five-piece group, which they did on a biannual basis throughout the 2000s. The night before the scheduled kickoff of the 2002 tour in Las Vegas, John Entwistle died of heart failure after spending the night with longtime rock groupie/stripper Alycen Rowse and was replaced on short notice by session bassist Pino Palladino, who has played for the group since.

The band's current incarnation, which Townshend jokingly refers to as "Who-2", consists of Daltrey, Townshend, Palladino, Starkey, and Townshend's little brother Simon on backing guitar and vocals, among other touring members. In 2006, the group released Endless Wire, their first studio album since It's Hard. While not particularly a hitmaker, the album featured some rather good songs, including the Man in a Purple Dress, a Dylanish Protest Song inspired by The Passion of the Christ; It's Not Enough, the band's first charting single since 1982; Mike Post Theme, a salute to the writer of theme songs for many of the TV shows catalogued on this very Wiki; and Wire and Glass, a "mini-opera" adapted from Townshend's novella The Boy Who Heard Music.

The band has performed only sporadically since 2008, including a handful of charity shows and a performance during the Super Bowl half-time show in 2010, though Roger Daltrey has toured internationally with a solo band in recent years, including the first touring production of Tommy since 1989. The band performed as the final act of the closing ceremony of the London 2012 Olympics and toured internationally in 2014 and 2015 to celebrate their 50th anniversary. A new song, "Be Lucky," was recorded for the occasion.

Despite rumors that this tour would be their last, 2019 saw the band embarking on a symphonic tour and recording their fifteenth, WHO.

The Who has also made an appearance in Rock Band: "Won't Get Fooled Again" in the first game, "Pinball Wizard" in the second, "I Can See for Miles" in the third, "The Seeker" in the fourthnote This makes them the only band to have an on-disc song in each numbered entry of the series, plus 20 downloadable songs. For the announcement of Rock Band 2 at E3, they even held a concert in promotion for it. Their entire performance at the 2010 Super Bowl is also available for download.

The band was inducted into the Rock & Roll Hall of Fame in 1990.

Not to be mistaken for the cult TV series Doctor Who; the only thing the two has in common is that they're both British icons that started in the '60s. Nor should they be confused with Canadian band The Guess Who

, or the World Health Organization

You can now vote for your favourite Who album HERE!