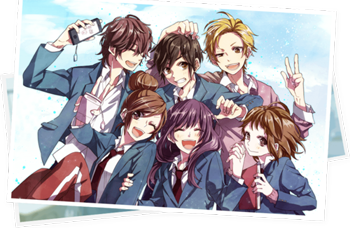 Confession Executive Committee (Kokuhaku Jikkou Iinkai in Japanese) is a multi-platform franchise that began life as series of music videos produced by HoneyWorks, depicting a series of events happening to a few groups of teenagers.

As of 2019, the series has been split into two storylines within the same continuity:

In the beginning, the series was primarily Vocaloid-based—mostly featuring GUMI and, to a lesser extent, Hatsune Miku, Len, V flower, and IA. However, as time went on, the series began using collaboration artists (CHiCO, sana, various musicians and seiyuu) instead, with a Vocaloid or other synthesizer cover as an alternate version.

Most of the songs are shared between HoneyWorks' Niconico and Youtube accounts, though there are some songs that are exclusive to the Niconico accounts and the albums. The Vocaloid songs can be found on the Youtube accounts, while the human versions are featured on their Niconico playlists. The songs without PVs and the drama segments, however, are usually found on doujin CDs or compilation albums.

The series has also produced several novels and comics (called "Short Stories"), which explore some of the songs' narratives and character backgrounds in greater detail. An anime film series for the franchise expands upon these materials, which ran two movies in Spring and Fall 2016, animated by Qualia Animation. The first, I've Always Liked You, adapts the events of "Confession Rehearsal" and part of "A Solution for Jealousy", while the second installment (The Moment You Fall in Love) adapts the "Right Now, I'm in Love" and "Triangle Jealousy" songs. A television anime, Our Love Has Always Been 10 Centimeters Apart., came out in the Fall 2017 Anime season, which centers around "First Love Picture Book" and "Our Minute and One Second". All three animated media were distributed by Aniplex, subtitled and streamed on Crunchyroll. The latter was also featured with exclusive rights on the Prime Video streaming service, but also was shown on FUNimation's streaming services.

The characters and a handful of the songs were later featured in the Rhythm Game HoneyWorks Premium Live, which while nominally a game celebrating all of HoneyWorks' discography primarily is concerned with the Confession Executive Committee franchise.

Tropes Shared by Both Series: