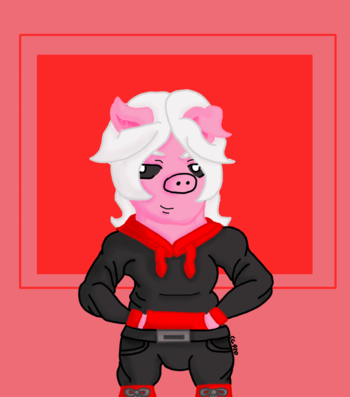 So, this is my Author Avatar, also named Cutegirl920fire or CG for short! Just your typical pig gal.
"pioneer marie antoinette simp"
Once said by the Troper, DontJinxUs, on this forum post

note yes I take this with pride
Advertisement:

Hullo, this is Cutegirl920fire. If you wanna listen to some background music as you read this, I suggest these two; a more calm one

and a more energetic one

here. Now, I will tell you the following:

open/close all folders
Historical Figures I'm Quite Interested In
Aside from Marie Antoinette, there quite a few Historical Domain Characters who peek a decent amount of my interest; list is in order of how much interest I have for them; if there's a tie (as in I find two figures equally fascinating) then alphabetical order; those who don't have a Useful Notes page on TV Tropes will be italicized.
Works of Fiction That I Enjoy
In Order of those I'm the most invested in; favs bolded.
The Genres I Like the Most
Advertisement:
Some Genres I'm Not Really Into
Some Tropes That I Happen To Like
Some Tropes That I'm Not Too Fond Of
Some Stuff I Did On TV Tropes
Tropes That Apply To My Avatar Gallery
Why make a list describing tropes to yourself when you can do that to your avatar gallery?
Advertisement: