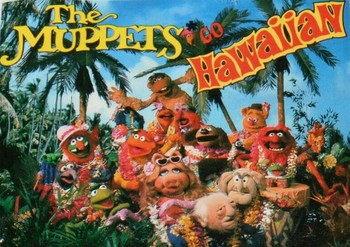 A Vacation Episode wherein the cast packs up and travels to Hawai'i, land of Hula and Luaus and (of course) Hawaiian Shirted Tourists.note Not to be confused with an episode set in Aloha (pronounced uh-low-uh), Oregon.

Often a thinly veiled excuse for a Beach Episode, if not outright inexplicable considering how expensive traveling there can be for mainlanders. Expect to see a huge number of native Hawaiians, even though they make up less than a quarter of the population, and a majority of Hawaiians are Asian or part-Asian. Hawaii-themed episodes seemed to reach the peak of their popularity back in the 1970s and '80s, when shows like Hawaii Five-O, Fantasy Island, and Magnum, P.I. were on the air and going strong.

A subtrope of Tropical Island Adventure.