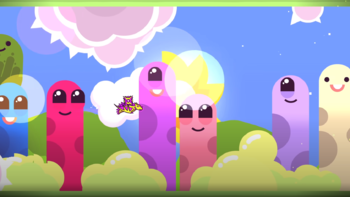 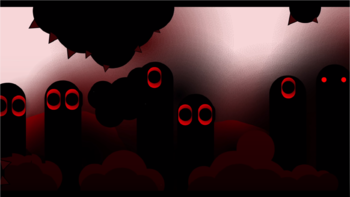 GAH!
Dwight: What is this thing you just sent me?
Jim: Oh, it's so cool. It's a picture of the most relaxing meadow you've ever seen.
Dwight: I know what this is. It's supposed to lure me into a sense of calmness, then a ghoul pops up and scares me.
Jim: Now why would I do that? Dwight, of all people I know you're unscarable.
— The Office (US)
Advertisement:

A work has a scary or disturbing image, scene, portion, etc. that clashes with the prior tone of the work. Sometimes it's brief and the rest of the work goes back to being the way it was before, while other times this thing happens to signal the story getting much darker from then on.

This hits hard because you would never expect to see something like that in a work like this — especially if said work hails from the Animation Age Ghetto. It's one thing to see a work that advertises itself as outright horror, since it at least prepares the audience for what is yet to come. But it's another to see one that features cute little bunnies and elves on the cover, only for the setting to suddenly become a war-torn wasteland straight out of World War I or a horrifying Eldritch Location, complete with characters having Cruel and Unusual Deaths left and right.

Don't expect the publicity for the work to give away these moments, either.

Other works — as mentioned in the above quote — may deliberately invoke it by setting up a bright, colorful, or serene tone and atmosphere to lure viewers into a false sense of security, then abruptly dropping the facade for maximum impact. One such type of work is the Subverted Kids' Show, which often employs a stereotypical, Sugar Bowl-like aesthetic in order to make the subsequent twist even more jarring.

A Sub-Trope of Mood Whiplash and Nightmare Fuel.

Be careful for using this trope. When the "Creepy" part is overly/constantly dark, bleak or frequently graphic with no positive developments/downer endings can alienate audiences.

Related to What Do You Mean, It's for Kids? (works that are disturbing but family friendly), What Do You Mean, It's Not for Kids? (mistaking a work for being family friendly), Crapsaccharine World (when the contrast is intentional, usually the whole world setting or certain places), Bleak Level (when the Surprise Creepy is in the form of a stage), Art-Style Dissonance, Backstory Horror and Gut Punch (although this can be overlapped with this trope).

By the nature of this trope, entries below will be SPOILERS. Even just seeing a work listed is a spoiler in and of itself.

"You can't have a nightmare if you never dream.