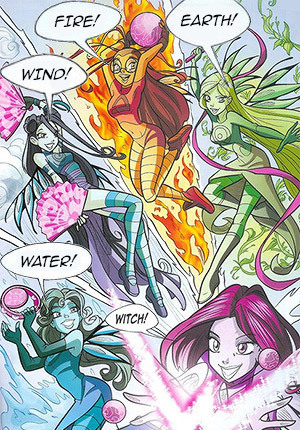 Before Quintessence came along, Will got the short end of the stick.

A Sub-Trope of Elemental Powers, but more specific or "classic" form.

This can sometimes be used literally by giving each member of the ensemble power over the particular element. Other times, however, it can be used on a more symbolic level, by giving each person personalities associated with the element in question or by using Theme Naming to assign each person an element.

is commonly used in the band. The set is made up of earth, air, fire, and water. This also tends to correspond with the Four-Temperament Ensemble, though there are other interpretations. Sometimes the water will be the only woman.

If you pick four characters randomly, there is an approximately 9% chance of this happening.

Usually, there will be four elements represented, but shows/games that absolutely need a Five-Man Band will possibly add another: western creations prefer something like Heart and eastern creations will use light or lightning, which will probably end up in the hands of The Hero. See Element #5.