Game Grumps, Steam Train, and Table Flip are full of many memorable characters. Mostly the ones they just made up.

Per the policy of the administration, all character tropes will not be spoiler tagged. Thus, especially when Table Flip is involved, Read At Your Own Risk! 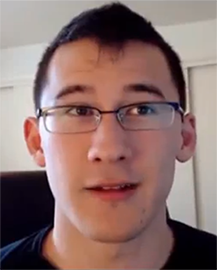 Wouldn't you trust this face?
Host of the titular Youtube channel

, in which he does Let's Play-style commentary over various games, infamously horror titles. Guest-stars in Betrayal at the House on the Hill, Shadows over Camelot, and Super Mario Kart

Markiplier has his own page here.

, in which he primarily does reviews of Minecraft mods. Guest stars in Metagame.
Belated Media
Host of the titular Youtube channel

, in which he does movie reviews and analysis. Guest stars in Metagame.
Cory (Spazkid)
The animator of the Youtube Channel Spazkidin3D

On Steam Train, he indirectly appears due to being the narrator of Battleblock Theater.

, who guest stars in Table Flip's Shadows Over Camelot series.
Rando Cardrissian
An NPC who participates as part of an alternate game mode in Cards Against Humanity.
ProJared 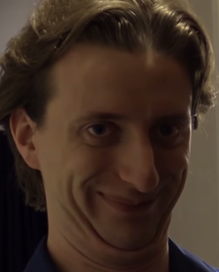 I'm playing Grumpcade.
Another host of a titular YouTube channel, where he does video game reviews, one-minute reviews, Nuzlocke challenges, and the occasional Let's Play. His ties to Normal Boots have allowed him to work with Jon and by extension the rest of the Grumps. Guest-stars in Vice: Project Doom, Dragon Ball Z Budokai 3, Trog!, Pokémon Snap, Metal Gear, and Teenage Mutant Ninja Turtles: Lost in Time.

ProJared has his own page here.

'Him'
A mysterious man in a black cloak and top hat who appears during Table Flip. He's summoned by Suzy to act as a referee and gamekeeper of sorts.
Advertisement:
Jirard The Completionist

A fellow Youtuber who reviews and completes Games. He is a friend of the grumps who has appeared on Table Flip and Grumpcade

Octopimp
A voice actor who has appeared on both the God Hand playthrough and Table Flip (Episode: "Kill Doctor Lucky"). Outside of Game Grumps, he is probably best known for his Homestuck fandubs.
Holly Conrad (Commander Holly)
Ross' ex-wife and costume/ special effects artist and Maker Studios/Polaris Community Manager, with several appearances on several reality shows such as Heroes of Cosplay. First appeared as a brief voiceover in the Outtake reel for the Dan/Steam Train T-shirt commercial, but didn't show up on the show properly until Date Grumps 2015.

Mochi and Mimi
Arin and Suzy's two pet cats, who are brother and sister through their mutual father. They have appeared in a number of different live action Grump moments, most notably in a Kitty Cat Dance Party at the end of Joe and Mac.
Doctor "Orph" Orpheus and Mojo
Ross and Holly's cats, one black and the other striped and grey. Orph's appeared in a T-shirt commercial, and been mentioned on Steam Train occasionally. Both Orph and Mojo have been featured on Meow Train, the new show on April Fools' Day.
Ms. "Mom Tron" Jafari
"Crazy man gonna give me a heart attack."

Jon's mother, who has called twice during their Sonic 06 playthrough. Notable for being one of the few people to speak on Game Grumps apart from Jon and Arin.

Lloyd Hanson (Paparaptor)
Arin's dad. Never actually appears in the show proper, but gets brought up a number of times.
Avi Avidan
"I'm freezing my ass off over here, it never stop...ehhhh...snow."

Danny's father. Never actually appears on the show except in Pokémon FireRed part 26, where we get to hear a pre-recorded voice mail from him

. Other than that, he's only mentioned in amusing anecdotes from Dan.

Dr. Donic O'Donovan
Ross' father, living in Perth, Australia. He is a medical general practitioner. He has been described on the show repeatedly, but made an appearance in their Amazing World playthrough

when called by Ross for permission to play the game.
Ninja Audrey
Audrey Wecht, Brian's daughter. She's still learning to speak but is a great source of comedy. Often seen on Brian's Instagram and the occasional stream.

Other Guests and Players

The first ever guest on Guest Grumps. A British musician who formerly worked at Rare and is responsible for the soundtracks of Kingdoms of Amalur: Reckoning, GoldenEye (1997), Banjo-Kazooie, Banjo-Tooie, Banjo-Kazooie Nuts and Bolts, Donkey Kong 64, Perfect Dark, Star Fox Adventures, Grabbed by the Ghoulies, Viva Piñata, Viva Piñata: Trouble in Paradise and CityVille 2.

A Player on Loadout that the Grumps were able to kill over and over again.

Teammate on Guns of Icarus Online that was using his brother's account to play.

Opponent on Guns of Icarus Online.

Player that the grumps trolled on Amazing World.

A group of players assembled to "spread the Christmas Cheer" on RUST.

The leader of the Yorples, a guild in Ross and Arin's Reign of Kings server, and the first king to reign after they held a competition to decide who would rule.

A previous member of the Rust server, and Jorpen's most trusted and loyal follower.

A major competitor in the initial fight for the throne, and subsequently an attempted usurper. He eventually succeeds in becoming king after he defeats Jorpen in a duel.

A rogue player that supposedly tried to attack Ross as he chased a supporter of Macho Man, and reappeared as a nuisance through the video afterwards.

British actor and R&B singer, famous for his role as Grey Worm on "Game of Thrones".

The comedy actor, writer, and director, with his wife, guest-star on the letsplay for Mortal Kombat Trilogy.

A player in Dark Souls with a touching redemption story.

Creator of Community and Rick and Morty among other shows. Appears on the show to play The Cat in the Hat with the Grumps because they starred in his Youtube Premium series Good Game.